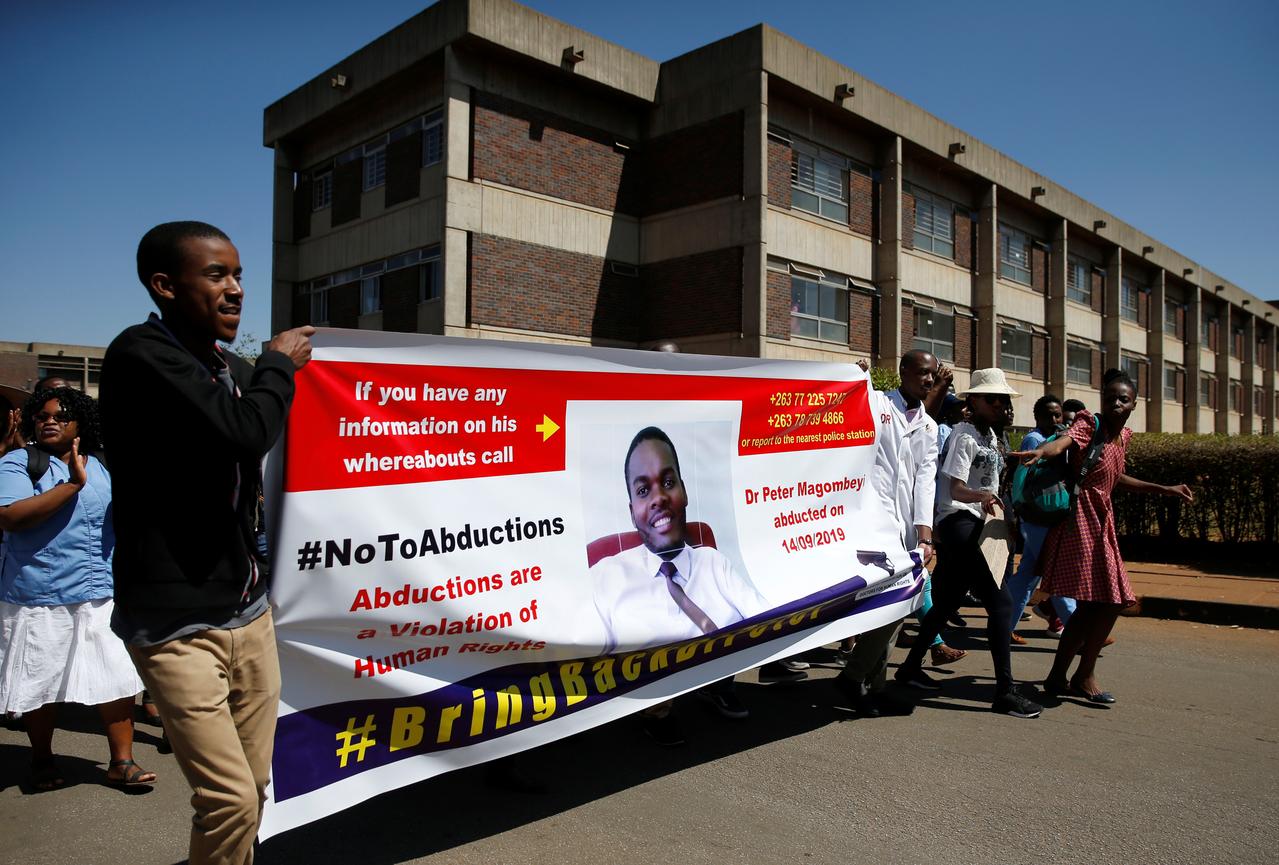 Striking healthcare workers march to protest over the disappearance of Peter Magombeyi, the leader of their union, outside a hospital in Harare, Zimbabwe September 18, 2019. REUTERS/Philimon Bulawayo

HARARE (Reuters) – A Zimbabwean doctors’ union leader who disappeared during a pay strike has been found alive, his union and police said on Friday.

The Zimbabwe Hospital Doctors Association (ZHDA) said however it would press on with its strike action, viewed as a test of President Emmerson Mnangagwa’s willingness to tolerate dissent in a country tainted by a long history of repression under his predecessor, the late Robert Mugabe.

Since Monday, doctors have held demonstrations and night vigils at the main Parirenyatwa Hospital in the capital over their leader Peter Magombeyi’s disappearance.

Magombeyi was found in Nyabira, 40 km (25 miles) west of Harare on Thursday night, police spokesman Paul Nyathi said, adding that law enforcement agents were investigating what had happened to him.

ZHDA said he was undergoing medical checks. He had called a colleague and said he was in the bush, it said. He then walked to some shops where police picked him but he could not remember much, only that he had been abducted by three unidentified men, ZHDA said.

Magombeyi could not be reached by Reuters for comment.

The union repeated its accusation that state security agents were making death threats to force doctors to return to work. The government has denied this.

The doctors, who have been on strike since Sept. 3, marched to parliament on Thursday to protest Magombeyi’s disappearance and press the government to increase their pay after a court ruled that police should not interfere with the march.

“At this time we must stick together in solidarity and press on in action. We therefore continue to say no money, no work,” the group said in a statement on Friday.

The doctors are seeking a 400% salary hike that they want indexed to the U.S. dollar. ZHDA rejected the government’s salary offers, which would see the lowest paid worker earning 1,023 Zimbabwe dollars ($72) a month.

Statistical agency Zimstat says an average family of five required 1,617 Zimbabwe dollars ($114.5) a month not to be deemed poor, but many Zimbabweans have seen their incomes eroded by soaring inflation.