Maputo (AIM) – Mozambican President Filipe Nyusi on Thursday met in Maputo with his Zimbabwean counterpart, Emmerson Mnangagwa, who is attending the Africa-United States Business Summit in the Mozambican capital. 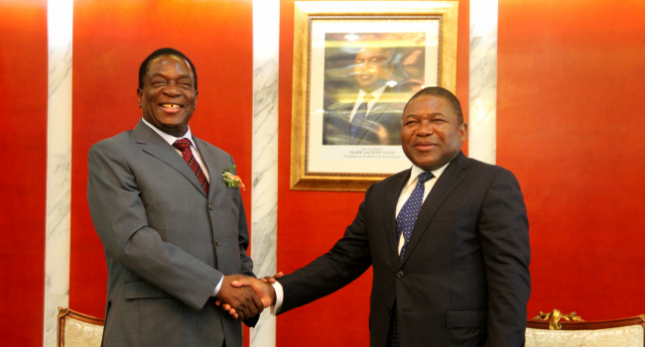 Speaking to reporters afterwards, Mnangagwa made it clear that the main purpose of the meeting was to request more electricity from Mozambique.

Currently, Zimbabwe imports 50 megawatts from the Cahora Bassa dam on the Zambezi river in the western Mozambican province of Tete. Mnangagwa wanted more because of the critical shortage of power in Zimbabwe.

Zimbabwe has suffered a severe drought, which has reduced the level of water in the reservoir behind the Kariba dam, thus cutting the dam’s capacity to generate power.

The water level at Kariba lake has fallen to about 33 per cent of its capacity, putting severe constraints on the amount of power the dam can generate. But Mnangagwa noted that the Cahora Bassa lake “is about 95 per cent full, and so the generation of electricity has not been affected”.

He said he and Nyusi discussed how Zimbabwe could have access to more Cahora Bassa power.

If all five turbines at Cahora Bassa are operating, the dam can produce a maximum of 2,075 megawatts. But much of this is sold to the South African electricity company, Eskom, under a long term contract, and to Mozambique’s own electricity distribution company, EDM.

Nyusi and Mnangagwa also discussed the Mozambican projects for the production of liquefied natural gas (LNG), following the Final Investment Decision signed by the consortium headed by the American company Anadarko on Wednesday. At 25 billion US dollars this is the largest investment ever in Mozambique.

Mnangagwa expressed his satisfaction and was sure that the LNG projects would also benefit Zimbabwe. “This is the vision we have”, he said. “And we are happy that in all areas concerning the development, modernisation and industrialisation of our countries, we find common points to consolidate our relations”.

Zimbabwe’s economy is certainly in a desperate situation. A source in Harare contacted by AIM on Thursday said that power cuts in the Zimbabwean capital are now running at 18 hours a day.

Not only is Kariba unable to produce sufficient power, but the giant Hwange coal-fired power station is also operating well below capacity. The low level of water in the Kariba lake means the dam is only generating 358 megawatts, compare to a normal capacity of 1,050 megawatts.

There are six units at Hwange, but only three are operating. Earlier this month there was only enough coal at Hwange to keep the power station running for another 20 days.