OUSTED vice-president Emmerson Mnangagwa said today Zanu PF did not belong to President Robert Mugabe and his wife Grace, as he promised to fight those he accused of making a mockery of the ruling party’s founding principles, ethos and values. 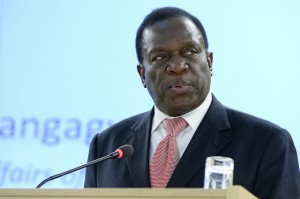 This is the first public statement since his sacking as the country’s vice-president on Monday. Mnangagwa was fired on charges of disloyalty and conduct inconsistent with official duties.

“Your excellency and First Secretary of Zanu PF, it is sad and deplorable that you have allowed our party to be hijacked by novices and external forces as well as individuals who have a proven record of treachery,” Mnangagwa said in a statement following his departure to South Africa on Wednesday.

“This party is not personal property for you and your wife to do as you please. Now that you have clearly told the world that I am your enemy who has taken in excess of 50 years to formulate a plan to dispose of you, I now urge all the genuine members of the party to determine for themselves who between the three of us including your wife and the notorious G40 boys is the enemy of the party and who the real culprit is in destroying our beloved Zanu PF.”

His departure comes at a time when the police have been instructed to arrest him on a litany of charges, including, treason, abuse of office and corruption among many others.

In the statement, Mnangagwa gives a brief history of his role in the liberation struggle, as well as his relationship with Mugabe.
“Of late I have been vilified beyond measure. My service to the party and government of Zimbabwe and my public and private posture towards my boss are well-known,” he said.

“No amount of lies and convoluted thinking can admonish my loyalty to my party and the president. I have never appointed or surrogated myself any position in the party and government. I remain firm and resolute against those who plunder public funds and are used by foreign countries to destabilise the party.

“These same people are brazenly protected in public by the First Lady thereby making a mockery of our public institutions. I stand prepared once again, to pay the ultimate price in defence of Zimbabwe. I am not afraid of anyone or worried about my political future under the current party capture that is being tolerated and condoned by the First Family.”

Mnangagwa also said: “We must reject this insane and idiotic habit of expelling and suspending members of the party merely because we differ in opinion or have brighter and more progressive ideas of improving the lives of our people.

Fellow Zimbabweans and especially members of Zanu PF, the time is now to say no to demi-gods and people that are self-centred and only think of themselves and their families.”

He added that: “Let us bury our differences and rebuild a new and prosperous Zimbabwe, a country that is tolerant to divergent views, a country that respects opinions of others, a country that does not isolate itself from rest of the world because of one stubborn individual who believes he is entitled to rule this country until death.

“My emphasis is for the nation to unite to create peace and development. This particular accusation is nauseating when the First Lady prefers to have the song ‘Zezuru Unconquerable’ played and sung at rallies she has held many times over. Who is a tribalist here?”

Commenting on his departure he said: “My sudden departure was caused by incessant threats on my personal life and family by those who have attempted before through various forms of elimination including poisoning.”