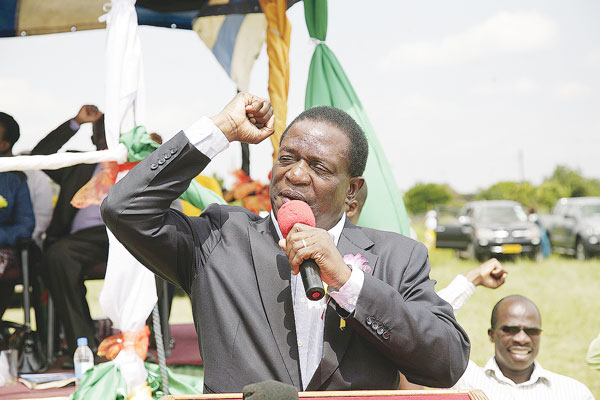 VICE-PRESIDENT Emmerson Mnangagwa cut a lonely figure at a Zanu PF rally at Tshovani Stadium in Chiredzi on Thursday, after senior government officials and securocrats snubbed an event he was addressing, as they scrambled for freebies at a nearby lodge, where he had officiated earlier.

Before the rally, Mnangagwa had officiated at a district constitutional advocacy meeting at Palm Tree Lodge, about two kilometres away from the stadium.

While the hall at the lodge was packed to the brim, afterwards, those people did not follow Mnangagwa to Tshovani Stadium, where he made a brief address to an almost empty stadium, largely comprising local school children.

“It was so embarrassing. How can the VP address a rally and very few people who were in his earlier meeting that was oversubscribed, while the rest were nowhere to be seen?” a Zanu PF insider, who declined to be named, said.

“He was literally alone, as those who were supposed to sit with him at the front were nowhere to be seen.”

Local Zanu PF legislator, Darlington Chiwa, said he only arrived at the stadium after Mnangagwa had finished his speech because they did not notice him leaving the lodge.

“We were waiting outside the venue of the first meeting to accompany him to the stadium and we were told that he had gone to relieve himself,” Chiwa said.

“When we realised he had left and later followed, he had finished his address.”

As if to add onto the Vice-President’s woes, across the country in Harare, he was being roasted by First Lady Grace Mugabe at a Zanu PF women’s league meeting.

Grace demanded President Robert Mugabe to publicly name his successor in a move believed to be a ploy to deflate Mnangagwa’s succession bid.