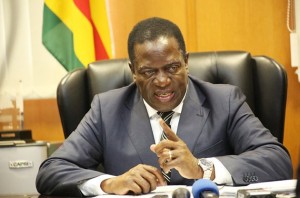 HARARE – President Emmerson Mnangagwa has been caught offside yet again
after he created a Special Anti-Corruption Unit (SACU) in his office
dismissed by legal experts as a nullity because it has no legal basis.

In a statement issued on Monday, the chief secretary to the President and
Cabinet, Misheck Sibanda, said the unit would be housed in Mnangagwa’s
office.

“The overall objectives of the unit shall be – to improve efficiency in
the fight against all forms of corruption and to strengthen and improve
the effectiveness of the national mechanisms for the prevention and fight
against corruption in accordance with the anti-corruption strategy,” said
Sibanda.

“The members of the unit will be announced in due course,” added Sibanda.

But legal experts canvassed by the Daily News yesterday said the
declaration was in breach of the country’s laws as there was no legal
authority allowing him to interfere with the prosecution authority, which
lies in the Prosecutor General (PG).

Tinoziva Bere, a legal expert, cautioned against the creation of parallel
structures, saying Mnangagwa must make use of existing policing,
investigating, advisory and prosecuting arms of the Executive.

“There is only one PG. The president has no power to appoint a set of
prosecutors answerable to him or his office. The president directs the
army to defend the country; the Executive investigate through the police,
the Attorney General (AG) advises government, the PG prosecutes
independently; the lawyers defend and courts adjudicate,” he said.

“This is elementary constitutional law. If the PG has failed, the
Constitution has provisions for his removal and replacement. The president
cannot lawfully set up and or run unlawful parallel structures,” opined
Bere.

After he came to power following a military takeover of government last
November, Mnangagwa declared war on corruption.

But critics dismiss his abhorrence for corruption as all froth and no beer
because the blitzkrieg has not nailed a single person thus far, and is
being perceived as targeting those who resisted his ascendance to power.

Mnangagwa himself has not hidden his displeasure with the lack of teeth
demonstrated by those tasked with fighting graft.

He said as much in his latest statement issued through Sibanda, revealing
his unhappiness with the snail’s pace of progress in tackling corruption.

The creation of SACU could therefore be a vote of no confidence in the
police and the Zimbabwe Anti-Corruption Commission (Zacc).

“They might be some problems because the bodies that already exist are
dealing with this. Public bodies depend on legislative bodies and it is
hard to see where it derives its powers from, he needs to clarify what
legal instrument he is using to set the unit,” said Lennington, a
University of Zimbabwe lecturer.

This will not be the first time that Mnangagwa has been caught offside,
legally.

Since his appointment in November last year, he has lurched from one legal
mistake to the other – from is decision to mess up with ministerial
appointments; his pronouncements in Davos that elections will be held in
May when under the Constitution the earliest polling date is July 23rd and
the last date is August 21 or also giving an ultimatum to those who
externalised money and assets when he does not seem to have a legal basis
for it.

Alex Magaisa, a United Kingdom-based law lecturer, wrote on his website
that Mnangagwa’s office should keep away from prosecution functions.

He said in terms of the Constitution, the legal authority to prosecute
vests in the National Prosecuting Authority (NPA), the only agency that
has the power to prosecute on behalf of the State.

“In this regard, section 258 states as follows: `There is a NPA, which is
responsible for instituting and undertaking criminal prosecutions on
behalf of the State and discharging any functions that are necessary or
incidental to such prosecutions’,” he said.

A former advisor in the office of the late Prime Minister Morgan
Tsvangirai, Magaisa, said the president should not even be seen to be
managing those who prosecute.

“Since it is illegal and unconstitutional to exercise prosecution
authority outside the NPA and the PG in the absence of any established
legal authority, any legal action or prosecution that is performed in that
manner would be fatally flawed. In other words, challenged in a court of
law, it would be a legal nullity.

“The problem that the president has identified at the NPA can be solved
without undermining its independence and integrity. If it is a question of
resources, then all that needs to be done is to invest resources in the
NPA. The lack of resources points to a systemic problem which needs a
comprehensive solution that does not leave the NPA exposed. If the PG has
agreed to this solution whereby he would have to give prosecution
authority to persons who are outside his control and are housed in the
Office of the President, then he too is undermining his office and the
Constitution,” said Magaisa.

Political scientist Eldred Masunungure said the creation of yet another
body fighting graft adds to the confusion instead of tackling the cancer
that is corruption.
Masunungure said it is further confirmation of what some political
scientists call “wicked politics”.

“He appears to be in sixes and sevens and that is the complexity of the
problem. You don’t deal with that problem by creating more and more
institutions when we have some that are in the Constitution including NPA,
Zacc – we now have this other unit, which is an administrative unit to add
to the confusion and I don’t take it  seriously because it is accountable
only to the president,” he said.

“It has no freedom to move and is restricted in a manner that is
favourable to the president. This is a symbolic move, this is meant to
impress but he must face such problems head on and not going around the
bush as he is doing now,” added Masunungure.