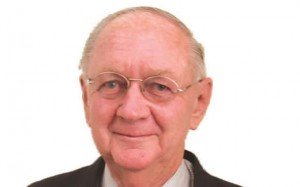 2017 was quite a year – it seemed to go by so fast! Almost left us breathless! The culmination of course was the “retirement” of Robert Gabriel Mugabe from the position of President, Head of State, Commander of the Armed Forces etc. etc. after 37 years of almost total power and control. I think the person who felt this “wind of change” most was his second wife, a scheming harridan of a woman who in the end was his downfall.

His replacement in terms of the Constitution is Emmerson Mnangagwa who is no stranger to us in Zimbabwe. He was at Mugabe’s side in the war, at Independence and served in the Government for all 37 years. He has had a controversial career, first as Minister of State security, then as Minister of Justice and Defence, Minister of Finance for a short period and finally, Vice President for two years.

In 1983 when I was General Manager of the Dairibord – a large Parastatal in the dairy industry, I got a call one day from the Catholic Mission in Lupane to say that the Army was in the District and causing mayhem. I called the then Secretary to the Prime Minister (Mugabe) and Cabinet, Charles Utete, and asked him what was going on. I invited him to fly with me in a light aircraft to see for ourselves. He replied after 30 minutes that this was “nothing to do with me, too sensitive and I should leave it alone”.
The Catholics sent me a report on the problems in the District (it was the start of Gukurahundi – the “storm that cleans”) and I took this report with me on a business trip to Scandinavia where I shared it with four foreign Ministers and asked them to get their Prime Ministers to call our Prime Minister and urge restraint. When I got home I was summoned to the Ministers Office and there I was given a transcript of my discussions with the Norwegian Secretary of State and I was given a severe warning from the Minister of State Security to “never do that again, or else”. That was Mnangagwa.

I took the advice and watched from the sidelines over the next 4 years as the supporters of Joshua Nkomo were bludgeoned into submission. Tens of thousands lost their lives and perhaps a million people fled their homes for South Africa.

Of interest to me as an economist, was his short sojourn at the Ministry of Finance. I do not recall the circumstances, but I do remember how effective he was in a very short space of time. This view was reinforced by the senior Civil Servants in the Ministry who said he was clear headed, did not have to be told anything twice, made decisions and was a pleasure to work with. Most of all he took advice and listened. So often a weakness in so called “strong men”.

I have been a Member of Parliament for ten years, during that time we have had many interchanges with Emmerson. He has a very sharp mind and a sense of humor but if you do take him on, expect no prisoners. The one thing that always impressed me was his automatic authority in the House of Assembly – often a rowdy and unruly place. If he stood up in a debate or at question time, a hush would descend on the House. Very few command that kind of control.

His nick name – the crocodile (Ngwenya) is very apt as all such Shona nick names are – we all have them – I have had several, not all complementary. But in this case when he sits in Parliament with his eyes closed, you know that he is listening and will react if prodded. When he does attack – its fast and he takes no prisoners, ask Joice Mujuru and now Robert and Grace Mugabe.

Mugabe’s departure was received with national celebrations – people poured onto the streets and the party went on through the night. This was proceeded by the extraordinary and completely spontaneous demonstrations the previous Saturday when perhaps 1,5 million people took to the streets of Harare in support of the Army and calling for him to step down. What stunned the world was the completely peaceful nature of this outpouring. What impressed me was its universal character, the people demonstrated all over the country, even in rural villages and towns.

But what next? What does 2018 promise at this point in our history. What I would have liked to see was a National Government, negotiated with all Stakeholders in some form of National Convention which would govern the country until we were ready to return to democracy – in, say, 5 or 6 years. It was not to be and despite his willingness to consider such a possibility, Mnangagwa was eventually forced to compromise with his security chiefs and the result was a Cabinet made up of some exceptional figures and some who are simply people who are as guilty as anyone of massive corruption and human rights abuse.

The other thing that we saw was the Military Junta, that has, in effect, been largely responsible for running the country and making key decisions, has come out into the open and taken key seats in the new Government. The man who ran the “Smart Coup”, General Chiwenga has been appointed Vice President. But in his place is the best soldier in the Country – a real professional who will change the face of the Armed Forces and ensure that we have a small, but highly proficient Army which does not dabble in politics.

So, what lies ahead for us in 2018? Firstly, we know the most crucial event is the election, which must take place in July or August this coming year. The President has made it clear, he is going to deliver a free and fair election, the outcome of which cannot be contested by anyone. He knows what that entails, and that the International Community will hold him to his word and demand that he delivers in every way. The signs are already there that this is being considered and that changes are being implemented. He is the master mind behind the 2013 elections when Zanu PF could literally decide who would win and who would lose. The result a clear victory for Zanu PF with a two thirds majority in the House and another 5 years for Mugabe.
Mnangagwa is in absolute control of the State and I think he is going to deliver. One of the key elements behind this strategy is that he knows the opposition is in shambles. The other thing he knows full well is that only a democratically elected Government will be recognised by the International Community and recovery and reconstruction of the Zimbabwe State and Economy is not possible without that.

I was given a transcript of his speech in Shona to the faithful at the Zanu PF Head Quarters in Harare when he returned form his brief exile while the Coup was planned and executed. In that address he showed clearly that he understood what a free and fair election meant for him and the Party. He told them not to interpret the mass displays of emotion as support for Zanu – it was the very opposite and was simply a clear demonstration of how much the Mugabe leadership was hated.

He also made it clear that his own record was a hindrance and that he and the Party had a lot to do before they could win a free and fair election. The key, he argued was to get the economy back on its feet and to restore hope among the people of Zimbabwe. The one thing I know about this man is that he is an operator and should not be underestimated. He appointed his Cabinet on Sunday, swore them in on Monday and held his first Cabinet on Tuesday, setting his new Ministers targets for the first 100 days and threatening that any Minister who failed to achieve his or her targets was vulnerable.

Already you can feel the impact of this early momentum. Time alone will tell, but the early indications are that we will see very significant changes in 2018 and that our economy and maybe our country, will begin the long road back to where we should have been, but for the Mugabe era. – By Eddie Cross