PRESIDENT Emmerson Mnangagwa and top government officials, particularly Vice-President Constantino Chiwenga and Agriculture minister Perrence Shiri, are scared stiff of personal criminal responsibility in the current process to resolve the emotive Gukurahundi massacres which took place in the Matabeleland and Midlands regions between 1982 and 1987, the Zimbabwe Independent has been briefed.

Senior government officials and civil society participants in the ongoing national healing initiatives revealed this week that Mnangagwa was anxious to ensure Gukurahundi is resolved and the chapter is closed, but without him or his lieutenants assuming individual criminal responsibility. About 20 000 civilians were killed in cold blood. 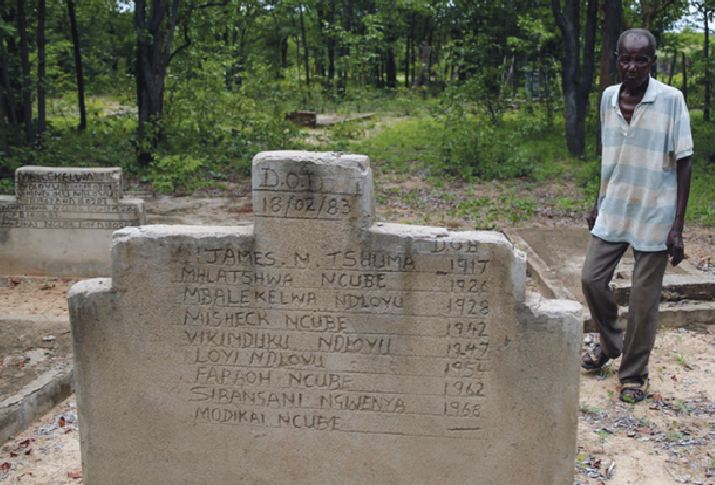 Melwa Ngwenya walks around mass graves of people killed during Gukurahundi massacres in the mid-1980s near Tsholotsho. Pic: Reuters.

“From the victims’ perspective, the Gukurahundi healing and reconciliation process is designed to address the situation, and ensure healing and closure for victims. The idea is to reach out to the victims through individuals, families and communities to come up with compensatory packages and measures, hence the implementation matrix announced by government,” one of the officials involved told the Independent this week.

“The Matabeleland Collective wants victims and truth to be central to the process. They also want reparations and compensatory measures. This is contained in the detailed document, the Matabeleland Collective Compendium, done by Dr Dumisani Ngwenya, Dr Nqobizitha Dube, Dumisani Sibanda, Dr Sibonokuhle Ncube, Ntandoyenkosi Dumani, Thando Gwinji and Jennifer Williams. Dumisani Nkomo and the convener Pastor Trevor Masuku also contributed a lot. Justice is, however, the missing link in their documents.”

The official added: “However, from the perpetrators’ point of view, the process must address the situation and close the chapter. The bottom-line for them is that the atrocities must be addressed and buried without truth and justice. The overriding agenda, though, for Mnangagwa and top government officials implicated is that, whatever happens, there must not be any personal criminal responsibility on their part.”

Showing official sensitivity to individual criminal responsibility, Mnangagwa’s spokesperson George Charamba this week told our sister paper, The Standard, in reaction to the accusation that his boss was the architect of the killings: “Not for the edification of political careerists and in any case, I hate the word architect because it suggests personal liability. They were part of the government of the day which reported to a commander-in-chief, which reported to a president (Mugabe).

“You cannot suddenly make the junior much more accountable than the person who was in overall charge.”

Mnangagwa has previously defended himself saying he did not carry a gun to kill anyone and demanded Gukurahundi must be a closed chapter, saying Zimbabweans must let bygones be bygones, and not dwell in the past. His demands were widely rejected.

The Gukurahundi atrocities fit into this category — crimina juris gentium — covered by the Rome Statute and International Law.

The concept of personal criminal responsibility — which Mnangagwa and fellow perpetrators fear so much, according to official sources — has a long history; from the Hagenbach trial in 1494 through the Nuremberg and Tokyo Tribunals and the former Yugoslavia and Rwandan hearings in 1994. It rejects the pretext that perpetrators killed victims on “superior orders from above”.

Gukurahundi touches bigwigs in the top echelons of power.

Various literature, reports and documents available show former president Robert Mugabe as the architect of the massacres, Mnangagwa the enforcer and military commanders and their troops as the executioners.

Shiri commanded the crack North Korean-trained Fifth Brigade unit which went on a killing rampage in the Ndebele-speaking south-western and Midlands regions between 1982 and 1987.

Co-Vice-President Retired General Constantino Chiwenga — then using his liberation war name nom de guerre Dominic Chinenge — commanded the Bulawayo-based 1 Brigade, while his counterpart Kembo Mohadi was a victim.
Mohadi was detained and tortured, alongside former senior opposition PF Zapu leaders and ex-Zipra commanders like Dumiso Dabengwa and Lookout Masuku who died in hospital due to detention anguish. Although acquitted by the courts, Dabengwa remained detained under state of emergency orders for five years.

As part of measures to drive the national healing agenda, Mnangagwa met members of the Matabeleland Collective at State House in Bulawayo last month.

The group had held a meeting at the Bulawayo Large City Hall in December 2017 where its leadership was tasked with making key demands to the state. These included addressing Gukurahundi and national healing, devolution of power, economic recovery, social inclusion and development equalisation.

The outfit then met in February 2018 where it produced a compendium with an advocacy roadmap. The roadmap included popularisation of the compendium, meetings with chiefs, engagement with the National Peace and Reconciliation Commission (NPRC) and engagement with Mohadi and Mnangagwa.

The group then wrote a letter to Mnangagwa requesting a meeting and, on March 19, Chief Secretary to the President and Cabinet Misheck Sibanda informed the outfit the president was willing to engage.

Mnangagwa then met 120 civil society leaders from 60 organisations — two representatives from each group — at State House in Bulawayo on March 21, where national healing, devolution and social inclusion were on the agenda.

Ngwenya also highlighted the need for decent reburials after requisite forensic processes have been done and through the affected families as well as access to treatment, both medical and psycho-social, for victims of Gukurahundi.

On devolution, Nkomo called for the speedy implementation of devolution, including harmonising local governance legislation and ensuring that line ministry activities are devolved. He also demanded devolving of tender processes to ensure that Matabeleland businesses and people benefitted.

Nkomo added resource governance should ensure locals benefit from their resources, while also calling for locals to be prioritised in employment. He further urged promotion of local languages, especially in education where children are taught by teachers who do not speak their mother tongue.

Nkomo also said immediate allocation of resources for the Matabeleland Zambezi Water Project and alternative funding models were critical and must be addressed urgently.

On gender equality, Matambo said women survivors of Gukurahundi should have ease of access to documentation and access to health and education. After that Mnangagwa said he had come to the meeting with an open mind and accepted the presentations.

Mnangagwa, state security minister during the Gukurahundi genocide, has always been in the eye of the Gukurahundi storm.
An article dated March 5 1983, published by the state-owned Chronicle, quoted Mnangagwa justifying the Fifth Brigade clampdown.
“Likening the dissidents to cockroaches and bugs, the minister (Mnangagwa) said the bandit menace had reached such epidemic proportion that the government had to bring in DDT (Fifth Brigade) to get rid of the bandits,” the Chronicle quoted Mnangagwa as saying at a rally in Victoria Falls.

“Cde Mnangagwa said in the campaign against dissidents, it was necessary to destroy the infrastructure that nurtured the bandits,” the Chronicle reported.

Seemingly blaming some people in the region for allegedly harbouring dissidents, Mnangagwa was also quoted by the newspaper as saying dissidents would only survive where there was fodder for them.

“Have you ever asked yourself why there are no dissidents in any places in Mashonaland?” he said.

Mnangagwa was also quoted as querying why people who were complaining of attacks and killings by the Fifth Brigade never complained to the government about acts of banditry by dissidents.

According to the Chronicle, he further said: “The Fifth Brigade’s sole mission in Matabeleland North was to get rid of the dissidents and their helpers for the people in the region to enjoy the fruits of independence like their counterparts elsewhere in the country.”

Mnangagwa was also further quoted on April 4, 1983 as saying: “Blessed are they who will follow the path of the government laws, for their days on earth will be increased. But woe unto those who will choose the path of collaboration with dissidents for we will certainly shorten their stay on earth.”
Kevin Woods, a former Central Intelligence Organisation (CIO) operative, who was also an apartheid spy or double agent, implicated Mugabe, Mnangagwa, Chiwenga and Shiri in his book The Kevin Woods Story — In The Shadow Of Mugabe’s Gallows.

In his book, Woods states: “I remember at some point after getting information about the brutality of the Fifth Brigade from my men, I forwarded the reports to the CIO Headquarters. I was then told by the CIO provincial commanding officer to report what was going on to JOC (Joint Operations Command) Commander Brigadier Chinenge.
“When I told Chinenge that things had gone wrong in the curfew area, he was not perturbed with my news. He told me not to worry, but to include those aspects in my normal weekly briefings which the next one will be attended by Mugabe, CIO minister Mnangagwa, CIO political affairs bigwig Edison Shirihuru, Perrence Shiri and the ZNA Chief-of-Staff General Gava (the late Vitalis Zvinavashe).

“I met Mugabe many times and would give him security briefings at 1 Brigade in Bulawayo. Dominic Chinenge, who was the 1 Brigade commander, Perrence Shiri and Shirihuru would interrupt if I was saying things they did not want me to talk to Mugabe about. Things like how the Fifth Brigade was going around murdering people.

“They would say, there is nothing like that chief this is all propaganda and stuff like that. But Mugabe knew because I would write reports and would be told that this is not my war, I should not worry. Mnangagwa, Shiri, Shirihuru and Chinenge supported Gukurahundi and patted Fifth Brigade commanders on the back.”

Charamba said Gukurahundi was “a war”. But Matabeleland Collective officials this week rejected this, saying if it was then the perpetrators also committed serious war crimes.