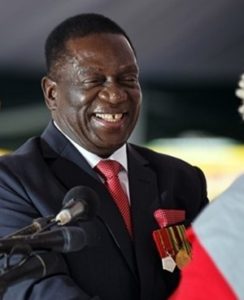 By Dorrothy Moyo| Zimbabwe’s President Emmerson Mnangagwa has been criticised for transforming Robert Mugabe’s birthday into a national holiday.

“So Mnangagwa’s first achievement on day one is making 21st February a national holiday?,” complained Farai Dube on Saturday.

On his first day in office, Mnangagwa gazetted the 21st February as The Robert Gabriel Mugabe National Youth Day.

The notice is contained in Statutory Instrument 143 published in the Government Gazette on Friday.

“(2) It is hereby declared that the 21st February of every year henceforth, shall be a public holiday to be known as the Robert Gabriel Mugabe National Youth Day.”

Calls for former President Mugabe’s birthday to be made a national holiday were adopted by Government in August following intense lobbying by the zanu-pf Youth League.

The day coincides with the 21st February Movement celebrations meant to commemorate the principles and ideals that former president Mugabe stood for.

The 21st February Movement was formed in 1986, by the ZANU PF Youth League under the leadership of then Deputy Secretary for Youth Affairs Webster Shamu.

Recently, the Youth League heightened efforts to make the former president’s birthday declared a national holiday as recognition of his efforts in empowering youths.

Speaking during his acceptance speech at his inauguration as the second Executive President of Zimbabwe on Friday last week, President Emmerson Mnangagwa indicated that the former president needed to be accorded the respect and recognition he deserved as one of the founders and leaders of Zimbabwe.

“To me personally, he remains a father, mentor, comrade-in-arms and my leader,” he said. “We thus say thank you to him and trust that our history will grant him his proper place and accord him his deserved stature as one of the founders and leaders of our nation.”