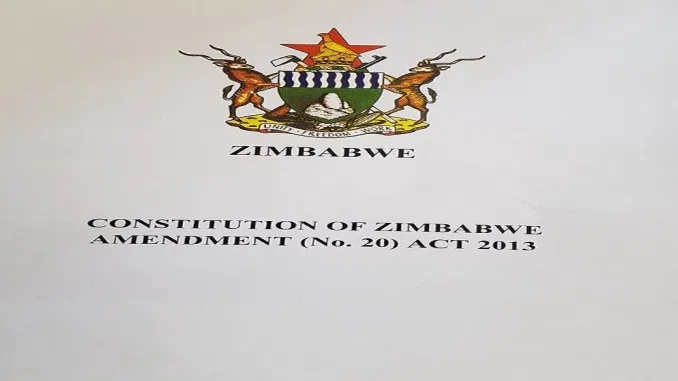 By Jonathan N. Moyo
Patriot Bill
According to the Permanent Secretary in the Ministry of Justice, Legal and Parliamentary Affairs, Virginia Mabiza, as quoted in the Sunday Mail on 4 October 2020, her Ministry drafted principles of a “Patriot Bill” (which later became the “Patriotic Bill”) in August 2020; at the cynical behest of the Cabinet Committee on National Peace and Reconciliation. Mabiza highlighted the following points as the key principles of her Ministry’s draft submitted to Cabinet:

The sanctions law
On 27 October 2020, the Minister of Justice, Legal and Parliamentary affairs, Ziyambi Ziyambi, who also chairs the Cabinet Committee on Legislation, asked Cabinet to approve the principles of the “Patriot Bill” drafted by his Ministry, which he presented no longer as the initially intended Patriot Bill, but as proposed Amendments to the Criminal Law (Codification Reform Act). Apparently, the Ministry had become concerned about the negative public and international reaction to the idea of a “Patriot” Bill.

The next day, Minister of Information, Publicity and Broadcasting Services, Monica Mutsvangwa announced, as reported by the Herald on 28 October 2020, that Cabinet had considered, and approved proposals presented by Minister Ziyambi to amend the Criminal Law (Codification Reform Act) to:

“criminalise the conduct of isolated citizens or groups who, for self-gain, cooperate or connive with hostile foreign governments to inflict suffering on Zimbabwean citizens and to cause damage to the national interest. The individuals or groups involve themselves in issues of foreign relations without verifying facts or engaging domestic authorities. Such wilful misinformation of foreign governments will therefore make the individuals or groups liable for prosecution. Other actions that will become punishable include planned and timed protests deliberately designed to coincide with major international, continental or regional events or visits. There are also unsubstantiated claims of torture and abductions that are concocted to tarnish the image of the Government, and amendments will criminalise such conduct”.

Tellingly, the Herald reported the amendments to the Criminal Law (Codification Reform Act) approved by Cabinet on 27 October 2020 as, “the sanction law”; meaning that, whether called the “Patriot” Bill or the “Patriotic” Bill, the clear intent of the proposed law is twofold: (i) to sanction or criminalise support for Zidera and related sanctions on targeted individuals or organisations; and (ii) to sanction or criminalise opposition to Mnangagwa’s regime.

Based on what has been empirically observed over the last three or so yeas since the Nov 2017 military coup, it is beyond rational disputation that Mnangagwa does not brook any independent and capable opposition whatsoever that seeks to wrestle power from him.

Patriotic Bill
Minister Mutsvangwa’s announcement that Cabinet had dropped what Mabiza had pitched as a “Patriot” Bill, in favour of amendments to the Criminal Law (Codification Reform Act) did not go down well with Zanu PF hardliners. Aware that the “Patriot” Bill is a Mnangagwa project that he cynically initiated through Virginia Mabiza by scandalously abusing the National Peace and Reconciliation Commission, whose remit is to bring closure to the gukurahundi atrocities through justice and national healing and not to strict people’s fundamental rights and freedoms; the Zanu PF hardliners tabled a motion in the National Assembly on 2 March 2020 in the name of the “Patriotic Bill”. Their loud message was that they wanted and were ready to mobilise for a “Patriotic Bill”, but not for amendments to the Criminal Law (Codification Reform Act).

“a) recognises and celebrates efforts made by Zimbabwean citizens at home and abroad to promote the country’s positive image and brand; and

The buttressing, rationalisation and reinforcement of these objectives was given by the Member of Parliament for Gutu South and Zanu PF Chief Whip in the National Assembly, Pupurai Togarepi, who said:

The imposition of sanctions by the United States, European Union, Canada, Australia et cetera was at the behest of our people.  The imposition of sanctions by these countries was as a result of lobbying by certain individuals. Some deliberately went to these countries to ask for the people of Zimbabwe to be killed by way of denying us access to health, in other words you are saying we should die.  These are citizens of Zimbabwe, what are we doing as a country to ensure that such people pay for exposing the people of Zimbabwe, we need to do something, and it should be done now.

“ …civic organisations that in their activities deviate from their core business and start advancing activities that destabilise the people of Zimbabwe … people come to this country, they tell us that they are social welfare organisations yet they have political agendas … if you have campaigned against Zimbabwe, the law should actually bar you from getting into any public office because you will have killed the people that you want to look after.

If you attack the leader of this country that has an effect when that leader goes out there to source business for this country.  Nobody wants to do business with a person who from his country is called so many names. So, it is very important that the media, politicians, businesspeople and all citizens of this country understand that they are people of Zimbabwe first before their political and business interests.  We are one and it is a law that we can put down today in this House on this land that will defend the interest of Zimbabwe.

It is notable that the reasons proffered by the Zanu PF’s Chief Whip to justify Mnangagwa’s proposed Patriotic Bill fly in the face of the rationalisations invoked by the regime to justify the military ouster Robert Mugabe and his government in November 2017.

In the main, the following seven notable criticisms have been raised:

Way forward for the Patriotic Bill
The form in which Mnangagwa’s proposed Patriotic Bill will get to Parliament remains to be seen. What is clear is that Cabinet approved the Bill’s principles last October and that since then, several iterations of the Bill have been drafted by the Attorney General’s office. Otherwise, there are three possibilities of what to expect, subject to what Cabinet will finally approve as the Bill to be gazetted and presented to Parliament.

One possibility is a Patriot Bill pushed by Virginia Mabiza and adopted on 4 August 2020 under the treacherous auspices of the Cabinet Committee on National Peace and Reconciliation; another possibility are the amendments to the Criminal Law (Codification Reform Act), presented to Cabinet by Minister Ziyambi Ziyambi on 27 October 2020; and yet another possibility is the Patriotic Bill championed by the Zanu PF parliamentary caucus, as demonstrated by the party’s yet to be closed Motion introduced by the late Alum Mpofu and Pupurai Togarepi on 2 March 2021 in the National Assembly.

As things currently stand, Mnangagwa’s Patriotic Bill is destined for Parliament, in one form or another. The Zanu PF political base has been mobilised for it; and the party’s rabble rousers are raring to go. Zanu PF sees the Patriotic Bill as a necessary means for protecting itself against all forms of political opposition in the run up to the 2023 general election.  It is therefore imperative for everyone else to rise up to the challenge and resist the Bill, by all available constitutional means, to protect the people’s human rights and freedoms, as the gains of Zimbabwe’s liberation struggle that are now enshrined in the country’s new Constitution adopted in 2013.