Money is the Root of All Evil

Source: Money is the Root of All Evil – The Zimbabwean

We all use money every day and yet few of us really understand what these bits of paper or cotton or simply figures in a ledger, really mean. But we know the stuff is important. In economic terms the answer is actually quite simple, the stuff is a means of exchange, a store of wealth and an expression of worth. 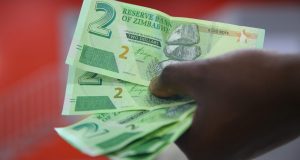 Zimbabweans know full well that the wretched stuff has a life of its own. In the period leading up to the GNU in 2009, we knew that the stuff was vanishing, almost magically in our pockets. We knew that what we put into our pockets in the morning, would not have the same value when we took it out in the afternoon. In fact, the stuff lost value at such a pace that we simply could not keep up. Yet you could still walk up to a bakery and buy a loaf of real bread with a barrow load of the stuff, it still had some value as a means of exchange.

What hidden hand was behind this process of devaluation? In our case it was a man in the Reserve Bank who had the keys to a printing press and was recklessly printing money on bits of paper, which looked legitimate and had a value with a promise on its surface. The promise was worthless and its legitimacy limited, but the signature was real.

Money is critical to all of us, we use it to exchange for work, or intellectual activity, or physical goods and services. Without it the global system could not operate, we would all be living in caves and surviving on subsistence, hunting and gathering. Even under those conditions we would have to create something we used for exchange purposes – bits of metal, a rock, a shell – in fact anything the community agreed could be used to buy and sell.

By and large the world has learned over the past ten thousand years what works and what does not work. After the Second World War Yugoslavia choose to print money, after all is that not the easy way out of trouble? Just print the damn stuff; the result, the near total destruction of value and the highest inflation in world history, only challenged by Zimbabwe in 2008.

For Zimbabweans the recent lessons are fresh in everyone’s minds and this explains the near total panic when the new Sheriff in town declared that the myth that the bond notes were USD in disguise, the disguise provided by the Afro Exim Bank of Cairo, was just that, a myth. The Bond rate collapsed to 6 to 1 and the RTGS Dollar was recognised as being just another (if electronic) currency and was also not related to the USD in any way except in the Reserve Bank Governors mind. Prices surged as business decided that they better be ready for the rapid decline in the purchasing power of local currencies. Warnings that the fundamentals were sound and the problem being addressed were brushed aside. Shortages emerged and everyone was saying that the ghosts of 2008 were back.

What we need to understand is that the sudden reversal of the collapse in 2008/9 on the 17th of February 2009, was not magic, not inspired by some miracle worker and was certainly not caused by anything the IMF said or had done. It was just that we (Chinamassa) announced at about 15.45 hrs in the House of Assembly that he was lifting all exchange controls, all price controls, all restrictions on gold trading and allowing people to use any recognised currency for local transactions.

The inflation rate fell instantly from millions of percent per annum to zero, shortages vanished in two months and hard currencies were being used in all markets and banks were meeting demand on request. In the wider economy revenues to the State grew an average of 70 per cent per annum for the next 5 years. GDP expanded explosively from US$1,8 billion in 2008 to 18 billion dollars in 2013.

Where did all this come from? It came from firm fiscal discipline imposed by the GNU (Biti) who simply said that he would not spend more than he collected. “We eat what we kill””. Inflation hovered about 3 per cent, money markets were stable and we imported all that we needed – running a deficit on our current account without any consequences. I could walk out the country with a million dollars in my suitcase or a kilogram of gold in my pockets. We had the freest economy in Africa and maybe one of the freest in the world.

What stopped the miracle? What turned this remarkable recovery around in 2013? Quite simply, we once again started printing money. We did not have our own currency and so could not resort to the printing press, but we had an even more powerful tool – a more modern tool, the computer and the electronic transfer system. So cheque books vanished, cash vanished, in any form, but we could swipe or transact via the Econet network on our phones. The Minister and the Governor celebrated – how clever we are; you do not need cash! We have defeated the ghosts of 2008 by creating a thing a South African economist called the RTGS dollar. In addition, they repeated the mantra, that these dollars are US dollars and see: we have a letter from the Cairo Bank that they will buy your RTGS dollars or even your “Bond” notes at 1 for 1.

At the start this was partly true, but as they expanded the fiscal deficit and printed more and more electronic dollars, the fiction became too hard to hide. They built up a whole mountain of debt – billions and billions of dollars in Treasury Bills, electronic bank balances and a huge RBZ overdraft. When the new Minister of Finance looked behind the door to his office he saw this massive overhang and when he pulled aside the “pole of no transparency” away, the mountain fell on the country and no one escaped.

But this is not 2008, our fundamentals are strong – exports at record levels, a strong economic recovery under way, revenues to the State rising strongly. All we have to do is restore fiscal discipline and balance. The new Minister has started by systematically attacking the underlying problems – first the new tax, then the FCA accounts and the lifting of import restrictions and controls, now the budget – perhaps the most important for 20 years.

He clearly has to take away from the Reserve Bank the right to take foreign exchange from exporters at an artificially low rate of exchange. He has to float the local forms of currency in circulation and restore the capacity of the market to balance supply and demand. If he does not, the transfer of value from the cutting edge of our economy – our exporters, will undermine our growth and foreign currency earnings. The transfer of wealth to the consumptive sector will continue to distort demand and maintain the queues.

Already market rates have fallen back – the local currency is trading at 3 to 1 or less. My own view is that once we have restored markets to their rightful place that we will emerge on the other side with a currency that is stronger than in any other regional State. Our bank balances will again have some meaning and inflationary pressures will diminish.

Money was perhaps one of the most important innovations of modern man – it affects all our lives and how it is managed is something we all have a stake in. We dare not leave this to our politicians or to shadowy characters in the Reserve Bank. The proposed Monetary Policy Committee of the RBZ is a new and critical agency of the State whose activities will determine the value of our money, our savings and our values. Lets pray that the right people will be appointed and then allowed to do their work without interference.