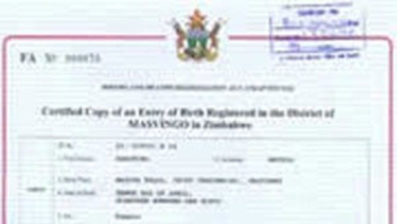 Registrar-General Mr Henry Machiri said more than a million citizens have been issued national documents such as birth certificates, IDs and death during a blitz which started in April and will run until September 30.

In an interview, with The Herald, Machiri said:

We are happy so far with what we have done. We have registered more than a million people countrywide for birth certificates, IDs and we feel during the month of September, which is the last month of the exercise, more people can still be registered. I’m persuading, encouraging our citizens to come forward and be registered.

If we talk about Matabeleland region, we have children who are brought by omalayitsha (from South Africa) whose parents will be based outside the country and left in the custody of their grandparents. According to the Births and Deaths Registration Act, it is the parents who are supposed to register that child.

But what we have done during this exercise which we started on April 1 and will end on September 30, we have relaxed to say, fine the parents are outside the country and the child is here with grandparents and as long as the grandfather or grandmother knows the particulars that are supposed to be on the form, we are accepting.

Machiri said President Mnangagwa’s directive to relax the requirements for acquiring the documents has benefited hundreds of people, particularly in the Matabeleland region.

Some of the people who were not documented were victims of the Gukurahundi massacres of the 1980s who were allegedly afraid of coming forward or had no parents’ identity documents.

Machiri said in cases where two witnesses were required at law to confirm the birth of a child for the obtaining of national documents, they were now accepting a single witness.

He also said the registry department will revisit some communities that were not adequately covered in the exercise.