Muchinguri passing the buck on state of roads in Muzarabani

Source: Muchinguri passing the buck on state of roads in Muzarabani – NewsDay Zimbabwe 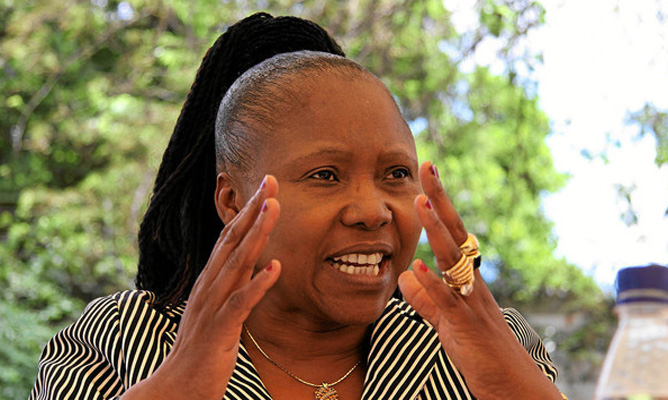 DEFENCE and War Veterans Affairs minister Oppah Muchinguri was in Muzarabani last week to officiate at the handover ceremony of a classroom block, a mothers’ waiting shelter and a solar-powered water project developed by the Red Cross.

This was obviously one of the very few visits by a high ranking official to this far flung Zimbabwean outback. And Muchinguri’s reaction after being bumped, tossed and rattled by the area’s rugged roads was quite telling.

“How do you expect to develop this area when you have such horrible roads? You need to take this issue of roads and bridges up urgently. This is serious,” she said.

While we are not really sure who she was telling all this, we would have thought that she would have been jolted into immediately adopting at least one road in the area which she would personally make sure was upgraded to first world status before the next elections.

We thought that her obviously very haunting experience would have shaken her conscience to immediately table the matter in Cabinet and direct the Transport ministry to urgently do something about the state of roads in the forgotten valleys of Muzarabani and Dande.

Instead, she chose to pass the buck to some nameless and faceless individuals.

While Muchinguri experienced the jagged state of the area’s roads seated in a comfortable four-wheel drive SUV, the Muzabani community trudge on those rough dusty roads every day on foot to and from the scant critical facilities such as clinics and schools. And we are pretty sure the dozens of people who came to listen to the Defence minister speaking at the handover ceremony, woke up in the wee hours of the morning to attend the function on empty stomachs.

That she also drove all that way to unveil projects developed by a foreign donor was also a serious indictment to government’s lip service to long promised development assistance to these poor and marginalised communities.

As has been the case for the past 42 years towards every major election, the Muzarabani community will hang onto Muchinguri’s impromptu visit to mean that government has renewed its commitment to uplift them from the dust bowls where expecting mothers are dying every month because of failure to access health facilities close to their homes.

The minister’s visit was a mere reminder to the villagers who to vote for, irrespective that they have benefitted next to nothing from their government for more than four decades.

Muzabani has dutifully supported the Zanu PF party since Independence in 1980, but all the government has done has been to feed them empty promises. And instead of being ashamed that it has failed the people of Muzarabani all these years, government keeps on holding them to ransom by sending high-ranking officials each election season to dangle false hope to the hapless communities.

It is a sham that the minister even accepted to officiate at a handover of simple infrastructure such as buildings her government has failed to provide in the past four decades.