Mugabe looked after his own

Source: Mugabe looked after his own – NewsDay Zimbabwe September 30, 2019 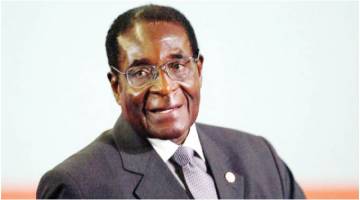 THE drums reverberated at the home of the late former President Robert Mugabe as boys from the Roman Catholic-run Kutama Boys High Mission sang in smooth innocent majestic voices to bid farewell to a man who towered over Zimbabwe for over 37 years.

Stubborn in death as he was in life, Mugabe was finally interred at his rural home in Zvimba under heavy security and a canopy adorned with beautiful flowery words in praise of the deceased, pouring out from mouths of close family, friends and foes alike all saying his legacy of empowering the local Zimbabweans will live forever.

The paltry number of mourns gathered at the homestead did not deter relatives from calling Mugabe, the best gift to the nation, an economic emancipator par excellence and a man President Emmerson Mnangagwa should emulate.

Johannes Karigamombe, wielding the power of the microphone as a relative of the late Mugabe, spoke about how he was given a farm taken violently from the hands of its former white owners, to give him and his family a fighting chance of a better life.

“I thought he would give me money, but he did not. Instead of giving me fish he gave me a fishing rod. I went and worked and bought a big car. I brought that car to him thinking that he would be happy, but no, he said go and keep farming. I went and farmed and bought an even bigger car and came with it to him again, but he said keep farming. He gave us wealth, that is the kind of man he was,” Karigamombe said.

Indeed there were big cars in the Mugabe homestead, quite an outstanding structure owned by any individual in the Zvimba village. Bigger than some government clinics and district hospitals and by far better than primary schools in rural Zvimba.

Former Mines minister Walter Chidhakwa, a relative of the late, stood up to add his voice attacking Zvimba chiefs for trying to force their decision to bury the late Mugabe at the National Heroes Acre against his last wishes.

Chidhakwa is not the only Mugabe relative afforded lucrative allowances, benefits and tittles by the former President ousted in November 2017 in a military coup for allegedly building a dynasty using State resources.

They all came to bid farewell to the man who, while responsible for bringing the economy of a once vibrant industry to its knees, ensured that those close to him were well fed.

Recipient of countless lucrative tenders under the Mugabe regime, Wickenell Chivayo parked his expensive automobile among other latest Land Rovers, Land Cruiser SUVs and Mercedes Benz in a sign of clear opulence in a land of hardships which seemed to spare those around the family icon.

Former Registrar-General Tobaiwa Mudede, also a Mugabe relative, was also there, adding to the list of high profile former civil servants who were either friends of the former President or his relatives.

Junior Shuvai Gumbochuma, sister to former First Lady Grace Mugabe, spoke of the late as a peace lover and peacemaker who would not hurt a fly, a man who despised violence and wanted nothing more than unity.

“He was a father and he listened even when there were marital problems and when called in to deal with family rifts he would seat there and listen. We all know that seeing him on TV he made us afraid, but at home he was such a loving man,” she said.

Mugabe is blamed for the Matabeleland genocide in early 1980s, which reportedly left over 20 000 dead following a deadly crackdown by the notorious North Korean-trained Fifth Brigade. Today the region still has fresh wounds after he lived his 95 years of life refusing to apologise and heal the rifts.

In 2008, he was head of Zanu PF when it ruthlessly crushed opposition political supporters in a presidential election run-off which shocked even the timid Sadc leaders.

Hundreds were allegedly killed, raped maimed or tortured, human rights activists were jailed, abducted and denied basic human rights by a man who even church leaders, as they prayed for him just before burial, said he was a good man.

The late MDC leader Morgan Tsvangirai described Mugabe as a primitive accumulator of wealth, whose need to pamper himself and his family with luxury was insatiable.

The imposing Blue Roof mansion, which the family is toying with the idea of turning into a museum, is a sign too obvious to ignore, for a man who ad nauseam declared his modesty and desire to identify with the poor.

“We have seen a primitive accumulation of wealth by Mugabe and his cronies; they have houses with 30 toilets. Their family members are in every facet of government, and they award each other tenders and farms, turning the whole country into a private limited company and that cannot be allowed,” Tsvangirai once told NewsDay in an interview.

Sister to the late, Regina Gata, a widow addressing mourners with a deep voice from a well-fed belly, told the generally poor mourners from the nearby homesteads, that because of her late brother she had a bundle of degrees and a thriving farm.

“There are many widows like me out there who you fought for, you gave them land, including myself. Even if I die I have an inheritance which I will leave for my children. I went to school and because of my brother lying here, I am a doctor,” she said.

Mugabe’s rural homestead has three compartments, one owned and used by his late mother Bona, the other which was built by his late first wife Sally, which looks like a hospital wing on its own.

This section, with a facebrick wall and a courtyard decorated with imposing palm trees, will soon be turned into a mausoleum and repository on the Mugabe family history anchored with the grave of the former President in the centre.

On the outer wing is Grace’s own quarters, magnificently built to shame even some homes in the leafy Borrowdale Brooke.

There is a dedicated Zesa substation in the home and a transformer just inside the perimeter, exposing the massive gaps of the haves and have nots.

Despite the harsh economic environment, in which a hardworking civil servant can ill afford a decent meal and lacks ability to pay just rentals, the Mugabe funeral was well lit.

Breakfast was served with eggs and bread, lunch was a five star meal opportunity with chicken, beef and fish finding space in the same plate – a rare feat for many.

To add to that government was building a mausoleum at the national shrine and already money had been spent just to pamper one of Zimbabwe’s controversial figure.

Family spokesperson Leo Mugabe, said the family had offered to pay for the construction of the extravagant special tomb to ease the strain on government which is failing to import adequate power supplies to run industry, buy medicines and water purification chemicals for its people.

“We were more than willing to pay for it as a family, we told government that we will pay, but they said no, we will meet the costs… but now that he is being buried in Zvimba the government can use that money to better the lives of taxpayers,” he said.

The drums beat for Mugabe one last time as flags kept at half-mast for a record three weeks can now go back to the crest. He is gone, but he will not be forgotten and the system he helped build is still in charge.

“The burying of Mugabe gives us no illusion that the ways of his past are gone. We know that this will not change our fortunes in life. The system is still there and nothing has changed. We pay our last respects, but our fight against the system continues, we have just changed tactic, but we continue to fight,” NCA president Lovemore Madhuku told NewsDay in Zvimba.

Inside reinforced concrete, stainless steel plates and a courtyard secured with iron screens,
Mugabe’s body was laid to rest and the keys will be guarded like a national treasure, but tales of his brutality escape beyond those walls.

The poverty authored under his watch remains a script authored only in Zimbabwe.