Mugabe refuses to quit as Zimbabweans march for his ouster 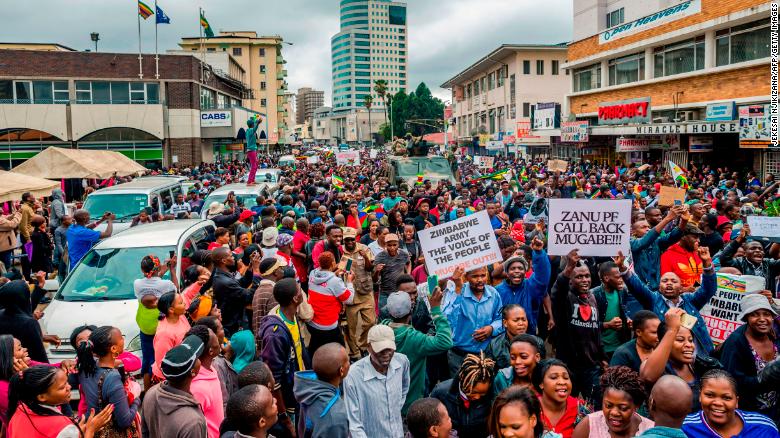 People march through a street in Harare on Saturday.

Source: Mugabe refuses to quit as Zimbabweans march for his ouster – CNN

Harare, Zimbabwe (CNN)Thousands of Zimbabweans took to the streets of Harare on Saturday to demand the resignation of President Robert Mugabe, in what could spell the political end for the 93-year-old leader who has ruled the country for nearly four decades.

Waving placards with slogans like “Go, Go, Our General” and “No to Mugabe Dynasty,” the atmosphere on the streets of the south African nation’s capital was electric, just days after the army put Mugabe under house arrest and detained some of his key political allies.
People waved Zimbabwean flags while others ran alongside army tanks and hugged soldiers to show their gratitude. CNN did not see any police at the protest, which was originally called by the country’s influential association of army veterans.

People march through a street in Harare on Saturday. 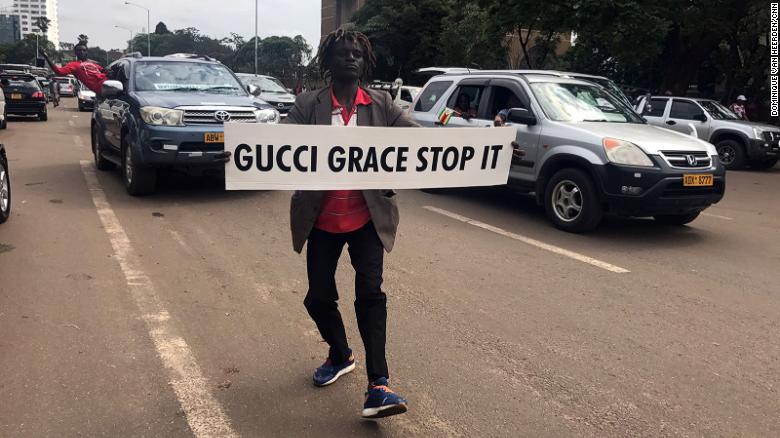 A demonstrator carries a sign directed at first lady Grace Mugabe.
“The whole nation is celebrating today. We are finally getting rid of the old man,” said Tanashe, a Harare resident who declined to provide a second name.
Mugabe’s power appears to have finally been brought to check not by the opposition, but by the military and members of his own party, concerned about his apparent plans to have his wife Grace, 52, succeed him.
But Mugabe was still refusing to step down on Saturday, an official with direct knowledge of the ongoing negotiations between the President and the military told CNN.
Mugabe was meeting Saturday with army chief Gen. Constantino Chiwenga to discuss what happens next, the source told CNN. Chiwenga is pushing for Mugabe to step down and an interim president to take over, the source said.
In December, a conference of the ruling ZANU-PF party will take place. It’s assumed that former Vice President Emmerson Mnangagwa will then become leader of the party and President of the country until elections next year, the source said.
ZANU-PF called for Mugabe to resign on Friday, the main state newspaper The Herald reported. It said party branches in all 10 provinces were also calling for the resignation of Grace Mugabe as the women’s league leader. 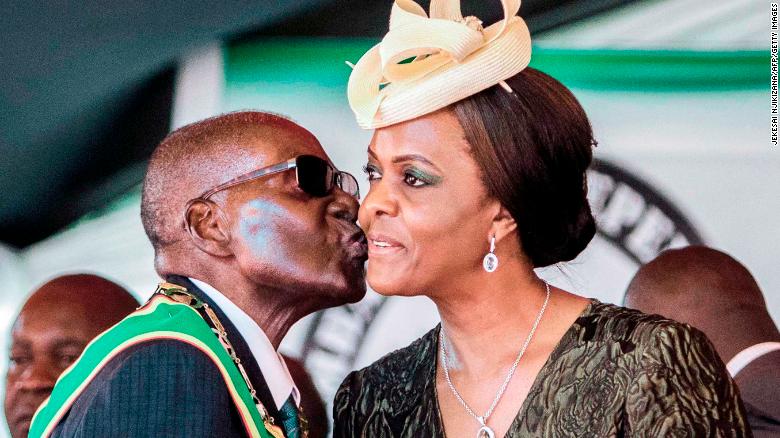 The trigger for what is to all intents and purposes a coup came 10 days ago when Mugabe fired Mnangagwa, a former ally with strong connections and the support of the military who was widely tipped to become the country’s next leader.
The timing, ahead of next year’s presidential vote, fueled speculation that Mugabe was clearing the path for his wife to take over in the event of his retirement or death.
On Wednesday, a military spokesman announced on state television that the army had launched an operation to target “criminals” close to the President who were causing “social and economic suffering.” Mugabe was confined to his multimillion dollar “Blue Roof” mansion. 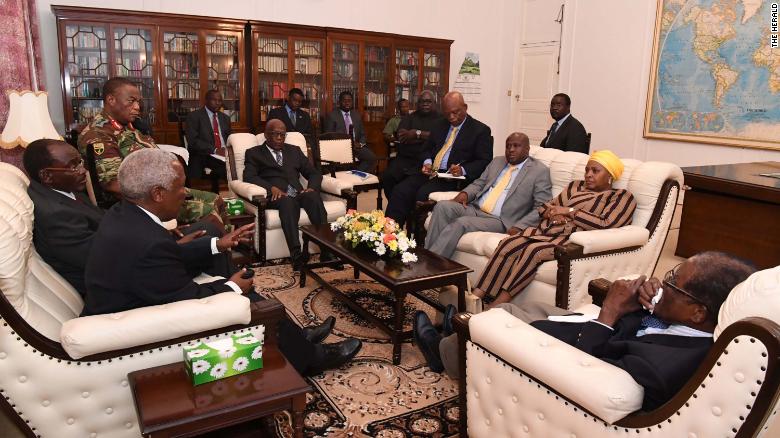 Mugabe holds talks with army officials and others on Thursday.
Mugabe was photographed Thursday in talks with Gen. Chiwenga and other officials at the official State House. Grace Mugabe has not been seen in public since the military intervention.
On Friday, Mugabe emerged from house arrest to attend a university graduation ceremony in Harare, in a staged public appearance that belied the reality that he is no longer in control.
His appearance was apparently designed to convey a business-as-usual atmosphere — the generals pulling the strings in Harare are desperate not to give the impression they are orchestrating an unconstitutional coup. 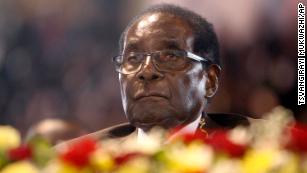 Mugabe supporters mull his fate: ‘It’s as if their father has died’
CNN has learned that Mnangagwa was instrumental in plans to seize control from Mugabe, one of Africa’s longest serving heads of state.
“This takeover was planned a long time ago by Emmerson Mnangagwa and secret discussions did take place with opposition about a succession plan including forcing out Mugabe,” a senior opposition leader with direct knowledge of the talks told CNN.
Opposition leaders have welcomed the developments. 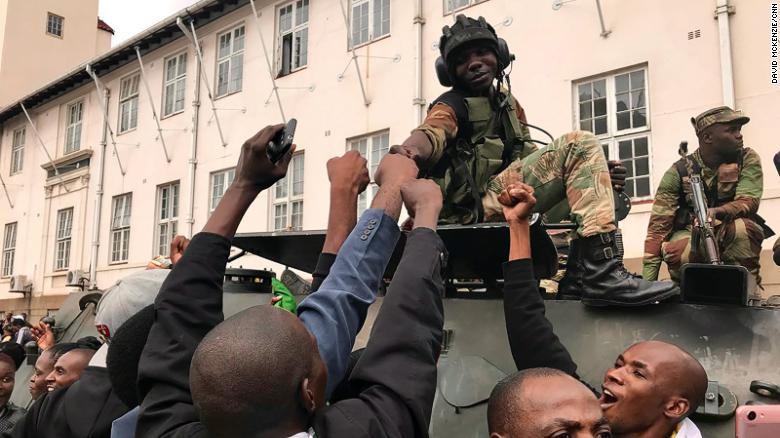 A soldier greets protesters in Harare on Saturday.
“While we may have fought and quarreled yesterday, today we are united by what is good for our country,” said Douglas Mwonzora, a prominent politician affiliated with the opposition Movement for Democratic Change (MDC-T), in a statement calling on his supporters to join the demonstration.
“We demand that President Mugabe resigns. But we have to think of tomorrow. The MDC-T demands a mechanism to ensure that the current economic meltdown is redressed. We must bring an end to all the poverty and misery that our people have been consigned to.”

The atmosphere in Harare is electric. Zimbabweans of all races, colours and tribes are congregated to bid the dictator farewell. Soldiers shaking hands with civilians. Am I dreaming? @Wamagaisa @ProfJNMoyo @nelsonchamisa #thisflag

Foreign powers have called on the military to show restraint in the upheaval, but have largely supported its actions so far.
US Secretary of State Rex Tillerson described the situation in Zimbabwe as an opportunity for the country.
“Zimbabwe has an opportunity to set itself on a new path, one that must include democratic elections and respect for human rights,” he said Friday at an event in Washington, calling for a quick return to civilian rule.