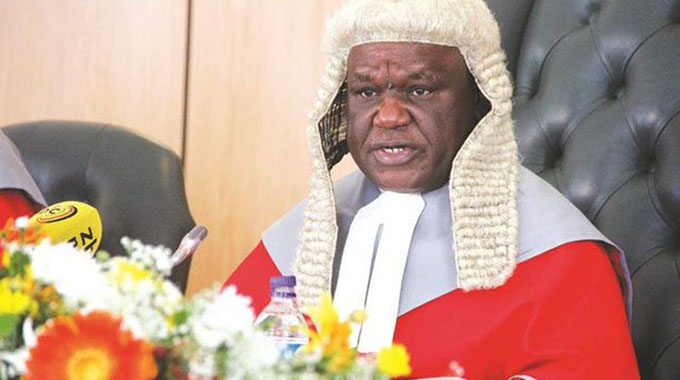 Daniel Nemukuyu Senior Reporter
FORMER President of Zimbabwe Mr Robert Mugabe freely and voluntarily stepped down from power and the assumption of office by his deputy Emmerson Mnangagwa was done in terms of the law, Chief Justice Luke Malaba has ruled. Dismissing an application by two fringe political outfits seeking nullification of the inauguration of President Mnangagwa in November last year, the judiciary boss said Mr Mugabe’s resignation was free and voluntary.

The Liberal Democrats and Revolutionary Freedom Fighters as well as activists Bongani Nyathi, Linda Masarira and Vusumuzi Sibanda sought the green light to contest the legality of the President Mnangagwa-led Government.
They argued that Mr Mugabe tendered the resignation under duress and that the assumption of office by President Mnangagwa was unconstitutional.

It was also argued in the court papers that the impeachment process that was instituted prior to the resignation of Mr Mugabe was unlawful and that it served to coerce him to step down.

However, Chief Justice Luke Malaba, sitting in his Chambers, threw out the request for direct access before rubbishing the intended constitutional challenge as frivolous and vexatious.

He said Mr Mugabe carefully applied his mind and decided to step down without the embarrassment of impeachment.
“The former President’s written notice of resignation speaks for itself.
“It sets the context in which it was written.

“He candidly reveals the fact that he had communicated with the Speaker of Parliament at 1353 hours. In the communication, the former President expressed to the Speaker his desire to resign from the office of President.
“The Speaker must have advised him that for the resignation to have the legal effect of bringing his presidency to an end, it had to be communicated to him by means of a written notice.

“A written notice of resignation addressed to the Speaker and signed by the President, on the face of it, meets the first requirement of constitutional validity,” said the Chief Justice.

He said the contents of the letter of resignation also confirm that the author freely appended his signature and acted in terms of the law.

“What the former President said in the written notice of resignation is the best evidence available of the state of his mind at the time.

“He said he was free to express his will to resign. Not only does the former President declare in the written notice that he made the decision voluntarily, he gives reasons for doing so in clear and unambiguous language.

“He said he was motivated by the desire to ‘ensure a smooth, peaceful and non-violent transfer of power that underpins national security, peace and sustainability”.

There is no doubt, the Chief Justice said, that Mr Mugabe ensured that his resignation from office was in strict compliance with the letter and spirit of Section 96(1) of the Constitution.

Chief Justice Malaba said President Mnangagwa’s assumption of office was therefore done in accordance with the provisions of the Constitution after a vacancy occurred due to resignation.

“It is common cause that the assumption by the first respondent of the office of President was in accordance with the procedural and substantive requirements of paragraphs 14(4) (b) and 14(5) of the Sixth Schedule to the Constitution.
“A vacancy in the office of the President occurred as a result of the resignation by the former incumbent,” he said.

“As a result of strict compliance with all the procedural and substantive requirements of a constitutionally valid assumption of the office of President left vacant by reason of resignation in terms of Section 96(1) of the Constitution, the first respondent assumed office as President,” ruled Chief Justice Malaba.

Chief Justice Malaba slapped the two minority political parties and the three activists with an order for costs.
He ruled that their application lacked merit and was tantamount to an abuse of court process.

Chief Justice Malaba blasted the applicants for maliciously tarnishing the Constitutional Court registry and the State security agents in the matter.

“The litigation amounted to abuse of court process. The applicants made malicious allegations of improper conduct against the officials in the registry of the Constitutional Court, accusing them of colluding with State security agents to make documents relating to their case disappear.

“They knew that the allegations were false.
“They conducted themselves in this manner to attract publicity for political reasons.
“Although the applicants are unsuccessful private parties in a constitutional case, their conduct justifies an award of costs against them,” ruled the Chief Justice.