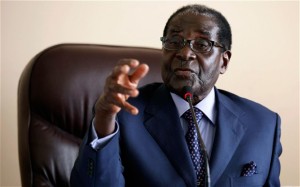 FALLEN former Zanu PF leader Robert Mugabe is set to stay in Zimbabwe after cutting a deal that effectively threw his acolytes literally under the bus.

Mugabe was reportedly accorded “full immunity” in a deal that includes his wife Grace, who is ironically credited with bringing down her husband because of her abrasive approach to politics.

“Mugabe has been accorded full immunity. He is staying put and going nowhere. He has been promised that there will be no recriminations. His businesses are safe,” NewsDay heard.

There had been reports that Mugabe might go into exile with South Africa the most likely option, but his wife has an outstanding criminal case there.

At the height of her power, Grace in August bashed a 20-year-old model friend of her two sons, Robert (Jnr) and Chatunga Bellarmine, after she barged into a hotel room in which they were partying.

The then First Lady left Gabriella Engels with a deep gash on the forehead, but managed to wriggle out of that country after being accorded diplomatic immunity on the basis that she had been in South Africa on government business.

Mugabe had been due to attend a Sadc summit later that week when the incident happened.

South African right-wing human rights group AfriForum tried to have Grace arrested without success and has been following up on the case in the country’s North Gauteng High Court.

But Mugabe’s allies, whom the Zimbabwe Defence Forces (ZDF) characterised as “criminals”, citing them as the reason for their “stepping-in to pacify” when military tanks rolled into Harare and placed the ex-President under house arrest, might not be lucky.

Higher Education minister Jonathan Moyo and his Local Government counterpart Saviour Kasukuwere, who were leading figures in the G40 faction that engineered then Vice-President Emmerson Mnangagwa’s expulsion from government three weeks ago to pave way for Grace, face an uncertain future.

There were conflicting reports regarding Kasukuwere and Moyo’s whereabouts, with some claiming they were still holed up at Mugabe’s private residence in Harare, while others claimed the two had since slipped out of the country after “buying” their way to freedom.

Information minister Simon Khaya Moyo said he was also in the dark.

“To be frank with you, we have no idea where they are. We have only heard rumours that they took refuge at the Blue Roof (Mugabe’s private home), but that is as far as we know. We really do not know anything more,” Khaya Moyo said.

Following Mugabe’s decision to resign on Tuesday, Kasukuwere was among the first to tell the world albeit cryptically.

“Adios baba. 37 years of a good run. Let’s embrace the new dispensation and build our nation. Unity is strength and peace is a prerequisite for progress,” Kasukuwere tweeted just after 5pm way before the Speaker of Parliament Jacob Mudenda made the official announcement.

Moyo, on the other hand, repeated Mugabe’s wartime maxim that “the politics leads the gun” in apparent reference to the intervention of the military in the succession struggles.

“There will never be anyone like RG Mugabe. I’m grateful for the opportunity to have served my country under him. I am proud that I stood with and by this iconic leader during the trying moments of the last days of his presidency,” Moyo, who was said to be the brains behind G40, said.

He has a pending case in which he is accused of having pilfered over $430 000 belonging to the Zimbabwe Manpower Development Fund, while Kasukuwere is accused of dodgy land deals.

Another leading G40 figure, Finance minister Ignatius Chombo, was taken into custody by the military in a pre-dawn raid at his home and has not been seen in public since then.