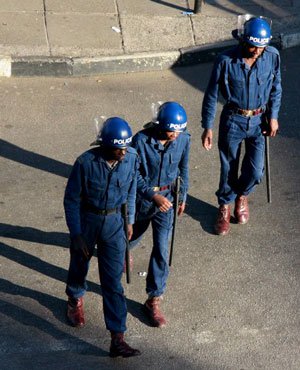 Zimbabwe’s former vice president on Monday fled from anti-corruption questioning after he was summoned over alleged criminal abuse of office, officials said.

Phelekezela Mphoko, 79, who served under long-time ruler Robert Mugabe, was due at the police in Bulawayo, the country’s second city, to record a statement on the allegations.

But he drove off as soon as officials from the Zimbabwe Anti-Corruption Commission (ZACC) approached his car.

“We had agreed to meet at the police post at the magistrate’s court to record a warned-and- cautioned statement and have his fingerprints taken but when our officials approached his car, he drove away at high speed,” ZACC spokesperson John Makamure told AFP.

“He is now a fugitive from justice,” the spokesperson said, facing accusations of ordering the release from police custody of a chief executive officer and a non-executive director of the state-run roads authority.

Mphoko was, along with current president Emmerson Mnangagwa, one of two vice presidents at the time of the ouster by the military of Mugabe in November 2017.

He left the country as the coup unfolded but later returned.

An attempt to arrest him by ZACC last week was blocked by his family.

ZACC tweeted Friday that it was “sad” that Mphoko had “refused to collaborate with the enforcement officers and unfortunate that he and those around him believe that they are above the law”.

Lawyer Zibusiso Ncube told AFP that they had an agreement with ZACC that on Monday he would sign a statement at the police “but when we got there they said they (the police) had instructions to detain him”.

“He drove away and is at home.”

The lawyer said the ex-vice president was prepared to appear in court to answer the charges, but “Mphoko claims he heard from impeccable sources that if he is detained, he will be injected with a poisonous substance”.

He is the second high ranking member of the ruling Zanu-PF party under probe by the recently reconstituted ZACC.

Prisca Mupfumira, who was fired as tourism minister earlier this month, became in July the first high profile official to be arrested and detained for alleged graft. She is still in remand prison after being denied bail.