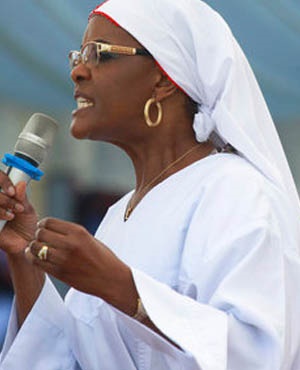 Harare – He’s the minister who once famously referred to himself as Robert Mugabe‘s “ever obedient son”.

Home Affairs Minister Obert Mpofu says he would ask his wife to pray for him to shield himself from former first lady Grace Mugabe‘s tirades at ruling party rallies where she dished out the dirt against her opponents within the ruling Zanu-PF.

“Before attending rallies I would ask my wife to pray because it could be me who would be insulted,” Mpofu told the state-run Chronicle.

Mpofu’s wife Sikhanyisiwe is a member of the Seventh Day Adventist Church.

The paper said the prayers were obviously effective, as Mpofu was never targeted by Grace, who regularly rebuked Emmerson Mnangagwa, the then vice president, over his ambitions to succeed former president Robert Mugabe.

‘Not one of us hates Mugabe’

Mpofu’s escape from a tongue-lashing in the politically-tense days leading up to last month’s military takeover may have had something to do with his pledge of loyalty to Mugabe in 2010. That’s when, as mines minister, he reportedly signed a letter to Mugabe as “your ever obedient son”.

“We love the former president Comrade Mugabe, not even one of us hates him,” Mpofu said, adding that the November 15 military intervention was justified as “there were weeds, malcontents and criminals in the party who did as they pleased”.

That’s a reference to the G40 group loyal to Grace Mugabe. Most of its members, including the former first lady, have been expelled from Zanu-PF. Several have now fled the country.