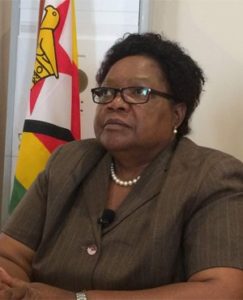 If she wins the upcoming elections, former Zimbabwean vice-president Joice Mujuru, has vowed to do everything she can to track down Itai Dzamara, the outspoken critic of former president Robert Mugabe.

Mujuru, who now leads the People’s Rainbow Coalition (PRC), has promised to leave no stone unturned in the search for Dzamara, who was abducted three years ago.

Dzamara disappeared on March 9, 2015, after staging lone protests in Africa Unity Square in central Harare, calling for Mugabe to step down as president.

According to NewsDay, Mujuru released a 10-pledge summary of her coalition’s election manifesto.

It stated that “the PRC government will institute two judicial inquiries on disappearances, one on missing persons such Itai Dzamara and Paul Chizuze and others, and another on the missing $15bn and other illicit financial flows”.

The PRC presidential candidate added that her government would be a “leaner, more productive, gender and age sensitive cabinet, characterised by a skills mix, experience, technical astuteness and national integration”.

She also said that, under her government, the southern African country would rejoin the Commonwealth and the Rand Monetary Union to resolve the current cash crisis.

Mujuru who had been in Mugabe’s government for over three decades was fired from the ruling Zanu-PF party and government in December 2014, the state-owned Herald newspaper reported.

This was three months before the activists were abducted by suspected state security agents.

According to News24, the pro-democracy activist’s relatives said they would continue to search for him for as long as it would take them to find him.

His brother, Patson Dzamara, said he was not ready to give up.

Patson has maintained that his brother was kidnapped by the country’s military intelligence officials, under the instruction of the ruling Zanu-PF party, and that this is why it was taking so long to find him.