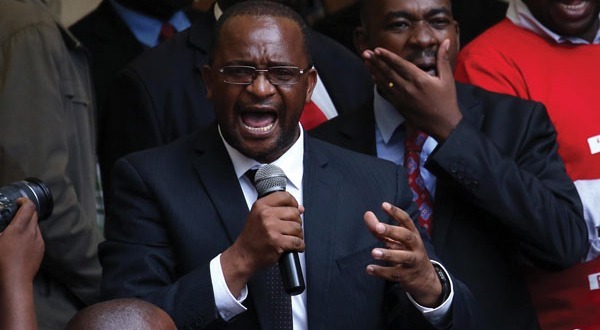 MDC-T secretary general, Douglas Mwonzora has won the race for substantive party president following a chaotic extraordinary congress which was characterized by violence leading in all his three contestants leaving in a huff during the middle of voting citing electoral  fraud.

According to the outcome announced by MDC T’s Independent Electoral Management Body ealier this morning, Mwonzora polled 883 votes out of a declared 1 027 total ballots issued in an election that went into the early hours of today.

Trailing him was the acting party leader Thokozani Khupe who polled 118 votes with Elias Mudzuri getting 14 and Morgen Komichi at the bottom with 9 ballots cast in his favour.

The announcement of Mwonzora’s win came six hours after Khupe had convened a press conference hastily flanked by the two other contestants, Elias Mudzuri and Morgen Komichi announcing the suspension the firebrand party secretary general and the extraordinary congress while voting was still in progress.

Khupe who was reading from a letter she had prepared, cited fraudulent activities regarding electoral procedures of the MDC-T Extraordinary Congress, instituting violence to other party members and election agents as well as inappropriately withdrawing party funds without following due process, thereby acting in a manner inconsistent with express or implied conduct of his membership of the party, putting the party into disrepute as reasons for Mwonzora’s suspension.