Herald Reporter
Zimbabwe is now well into the third wave of Covid-19, which started manifesting itself on a national level in the second week of June, with infection rates now running higher than in the second wave early this year although death rates are still slightly lower than in that wave.

The highest rate of daily reported infections in this third wave was seen on Friday, with 2 683 new patients, way above the 1 365 seen on 5 January, the highest daily total in the second wave.  Yesterday the total had dropped to 912.

While vaccination rates are rising, with almost 35 000 doses administered on Thursday and just over 30 000 on Friday last week, they are now likely to rise fairly sharply again with the half of the major delivery of 2 million doses that arrived last week assigned to first doses having been divided between the provinces and another large shipment of 1,5 million doses expected this week. Logistically, since second doses have to be the same vaccine as the first dose, second doses are kept back for the four weeks needed between doses.

Vaccination rates slipped in June and early July but are now rising fast with the Government pressing all teams to vaccinate as many as possible now that they can draw however many doses they can physically administer in a day. The Ministry of Health and Child Care, backed by the Ministry of Finance and Economic Development, is confident the supply chain from the Chinese suppliers is now fully functional, so allowing a major speed-up in vaccination rates.

One likely difference though is the better targeted testing by medical authorities as the Covid-19 pandemic continues. Good contact tracing and testing of contacts will track down more of those infected, even if they have no symptoms or only very mild symptoms. The higher recording of infections this time round, without as yet a matching death rate, suggests that a larger proportion of sick people are being tested.

More and more medical experts, the latest being those in Bulawayo, reckon that the test results underestimate the level of infection, with acting Bulawayo provincial medical director Dr Welcome Mlilo reckoning on Friday infection was more widespread in communities than test results suggest. He wanted far stricter enforcement of the new rules that allow only 40 percent of staff to work from the premises in all non-essential organisations and businesses to keep the real rates down.

Mpilo Central Hospital, the largest in Bulawayo, has now redesignated some wards for Covid-19 patients although it was not on the original list of city Covid-19 centres. 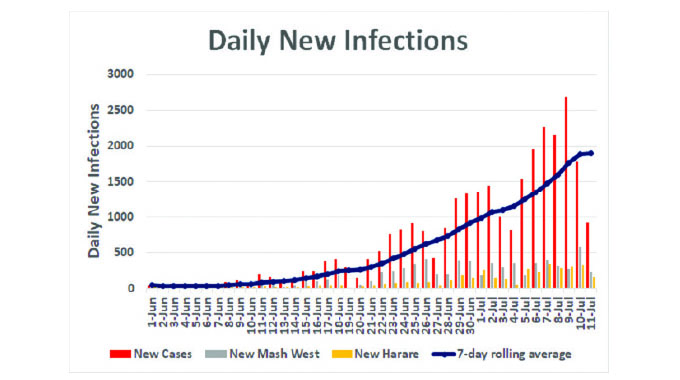 Graphs showing the daily number of new cases for Zimbabwe, Mashonaland West and Harare, and the number of reported deaths for Zimbabwe. The seven-day rolling averages show the average for the date in question and the previous six days. This average acts as a trend line, removing the dips and spurts and instead showing the longer-term trends.

According to the latest statistics from the Ministry of Health and Child Care there were across Zimbabwe 672 hospitalised patients on Friday with 433 having mild to moderate symptoms, 63 with severe symptoms and 33 in intensive care units. The other 143 patients were not showing Covid-19 symptoms as yet but had to be in hospital because of other or special reasons.

Mashonaland West was and largely remains the prime focus of the second wave, at one stage having almost half the infections and still usually the worst suffering province. The three most affected districts of Kariba, Hurungwe and Makonde were placed under enhanced level four lockdown a couple of weeks before the rest of the country.

That lockdown in general appears to have at least stabilised the rate of infection. The province’s infection rate peaked at 411 on 26 June and since then has been tending, slowly, to be drifting down with bumps and dips although it is still high. But on Saturday the provincial figure rocketed to 586 new infections being reported although some of those could be older results finally being tallied.

However, the reaching of what could have been seen as an infection plateau and then the slow decline tends to suggest that the Government’s decision to allow the economy to continue functioning was justified, while all non-economic activity except funerals was banned. The functioning of all business is under strict control, with reduced hours of business and a longer night curfew, plus the total ban on social and religious gatherings and the ban on inter-town travel.

In the first and second waves there was a heavy clamp on most retail business, although food shops and farmer markets had to be kept open. But comparing the progress of the third wave in Mashonaland West with the national trends in the first two waves, a very similar graph of progress is obtained.

This suggests that careful business activity, and the stress is on the word “careful”, is not a major contribution to chains of infection. Rather the socialising, and sloppiness of following rules and enforcement of rules, especially in the evening and after hours, is a major contributor. People tend to keep their masks on when around strangers and relax with friends.

This is borne out by the finding that funerals are probably the major single source of infection, at least outside cities, and the resulting decision to clamp down hard on those one permitted gatherings to ensure numbers are below 30 and that all at the funeral are taking the basic standard precautions of masking and distancing. 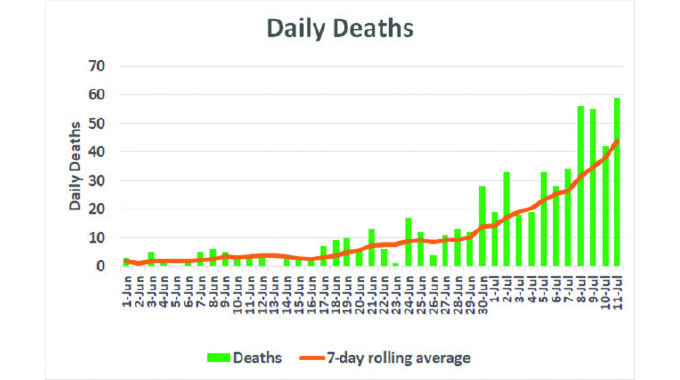 Unfortunately, the rest of the country has been catching up with Mashonaland West. Harare, the largest major urban centre to the infection focus, is now generally in second provincial place and, on some days, taking the lead slot.

Harare is particularly vulnerable with easily the largest provincial population and, far more importantly, having that population fairly densely packed. These two factors will tend to make each chain of infection longer, and there is more likelihood of someone being infected by a total stranger.

Again, while compliance with the masking and distancing precautions is fairly good in business environments, and among commuters travelling to and from work in daylight hours, there is still growing evening traffic on the roads. While essential workers are allowed to move between home and work during the curfew, it is generally suspected that most on the roads at night are breaching the curfew for social reasons. This is one reason why the Government has now ordered a tightening of curfew enforcement and wants those permitted to move to show they have that need.

The police have also been active in enforcing the general and special lockdown provisions. In a detailed breakdown of the 4 304 arrests on Wednesday last week, the bulk, 2 437, were of people not wearing masks.

Then there were 73 for Liquor Act offences, which includes public drinking or running a shebeen, 238 for Road Traffic Act violations, which would include all the pirates caught in intercity and local travel, 77 for opening a non-exempted business, which would include staying open after 3.30pm, 831 for unnecessary movement in a lockdown, which includes curfew breaking, and six for being in a public gathering.

One problem noted in both the first and second waves, and likely to be seen in the third wave, is that even when an enhanced lockdown has seen the infection rates plateau, it takes roughly as long as the build up to that plateau for the rates to fall again to “background noise”.

Death rates start rising a week or so later than infection rates, since with Covid-19 the deaths come from those who have been sick for some days, and they fall later than any fall in infection rates since there are already sick people getting worse.