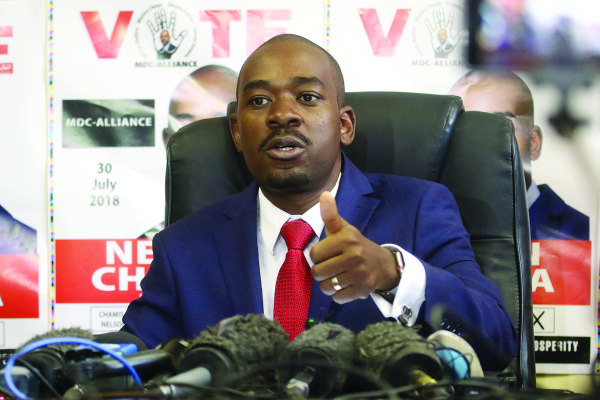 In his tailored suits and designer jewellery, Zimbabwe’s main opposition leader Nelson Chamisa can work a crowd with all the drama of the Pentecostal preacher that he is.

In his tailored suits and designer jewellery, Zimbabwe’s main opposition leader Nelson Chamisa can work a crowd with all the drama of the Pentecostal preacher that he is.

At 40, he is nearly half the age of his main opponent Emmerson Mnangagwa, who took over as President after Robert Mugabe was forced from office in November.

Chamisa only became leader of the MDC-T in February, following the death of Morgan Tsvangirai – the former union leader who founded the party in 1999.

Years earlier, Tsvangirai had been drawn to the student leader’s charisma and eloquence, taking him under his wing.
But in his short time at the helm, Chamisa’s grandstanding has got him into trouble.

At a rally earlier this year he said that he had met US President Donald Trump, who had ”promised” to pump $15 billion (£11.3bn) into the cash-strapped country should the MDC win the July elections.

The US government said the statement was false and the MDC was reportedly forced to apologise.

He was then rebuffed by Paul Kagame who tweeted that he hadn’t a clue who the MDC leader was after another campaign trail claim.

Chamisa had boasted that when he was technology minister in the Mugabe-led coalition government, set up following the disputed 2008 poll, he had met the Rwandan leader and been instrumental in crafting a digital strategy that has been key to Rwanda’s economic success.

Chamisa hit back by posting a photo of him shaking the President’s hand.

“Your Excellency, you’re not expected to remember everything. We met at a conference a few years back & you requested your ICT DG to get a copy of a presentation I had given.There’s a generational consensus across Africa that your leadership of Rwanda is progressive and inspiring,” he flattered Kagame.

He has also been called sexist after telling voters he would marry off his 18-year-old sister to Mnangagwa if his rival only won 5% of the vote.

He later said it was a joke: ”It was just a political banter that I used to illustrate that even if I promised to give him my most prized possession, he would still not be able to defeat us in a free and fair election.”

The apology generated more controversy, which he batted away in a BBC interview.

”What’s disrespectful? As far as I am concerned, it is part of our culture. When your sister is about to get married, as a brother you must help her.”

Nicknamed ”Wamba Dia Wamba”, after a Congolese warlord, when as a fiery student leader, he was expelled from Harare Polytechnic for a time because of his activism:

Was a founder member of the MDC in 1999, becoming its youth leader

Became an MP at 25, a cabinet minister at 31 and could be the youngest president at 40

He has degrees in political science, international relations, law and has studied marketing and theology

A recently qualified pastor, he has been using the hashtag #GodIsInIt for his campaign

In spite of these gaffes he remains hugely popular, especially among the young and unemployed.

More than half of Zimbabweans are now under 25, so the youth vote is key – and about 43.5% of registered voters are under 35.

Many of them believe that after years of Mugabe’s rule, it is time for a young and energetic person to lead.

A youth movement calling itself #GenerationalConsensus is campaigning on his behalf, saying the aspirations of the young people have been “suffocated by the past generation”.

But his critics say the way he took over the leadership of the MDC in February was ”unAfrican” as he was jostling for power before Tsvangirai was buried.

He elbowed aside two other party vice-presidents to be appointed leader by the national executive committee.

One of them, Thokozani Khupe, accused him of ”shamelessly staging a coup” and she has broken away from the party.
They are now both battling to use the MDC name and logo.

Most party officials back Chamisa – as do supporters, given the comparative turnout at rallies – but the split will cost him the votes among those who disapprove of the way he took power.

Some also believe having two MDCs on the ballot paper will confuse some voters.

Chamisa is standing as the candidate for the MDC Alliance, a group composed of the party’s other splinter groups and smaller parties.

He has failed to unite the opposition – more than 50 parties are contesting the parliamentary vote (there are 23 candidates on the presidential ballot).

But Mugabe’s former spin doctor Jonathan Moyo, now in exile, has come out in support of the MDC leader. A prolific tweeter, he has launched the hashtag #KwekweHimJuly30.

Born in the south-eastern town of Masvingo two years before the country gained independence, Chamisa only became eligible to run for president in February when he turned 40.

Scrap local “bond notes”, and introduce the South African rand as the main currency to deal with the cash shortages and eventually join the Rand Monetary Union

Devolve power to the provinces and rename them to get rid of divisive, ethnic names, such as Matabeleland and Mashonaland

Run a lean cabinet of 15 ministers or fewer

Establish a $100bn economy within the next 10 years

A practising lawyer, he also qualified as a pastor two years ago after studying theology at a local seminary. He often preaches in church and posts about praying and the Bible.

But his main passion has always been politics, being elected secretary general of the powerful Zimbabwe National Students Union (Zinasu) in 1999.

He became a founding member of the MDC that year, serving as its youth leader and becoming in 2003 a member of parliament at the age of 25. He is one of the few remaining party executive members from this era.