The new Agricultural Finance Corporation Holdings, which includes the new Land and Development Bank, was launched by President Mnangagwa yesterday to boost and formalise finance for farmers across the full range, from communal land-holders to large commercial farmers.

The AFC, which is wholly owned by Government, was launched following the restructuring of Agribank and comprises four subsidiaries: the AFC Commercial Bank, the AFC Land and Development Bank, AFC Insurance and AFC Leasing Company.

The President said following the conclusion of the irreversible land reform, the focus should turn to increased productivity, profitability and sustainability. So the launch of the finance company was part of efforts to improve the operations of the agriculture sector and align its transformation to the National Development Strategy 1 and Vision 2030. 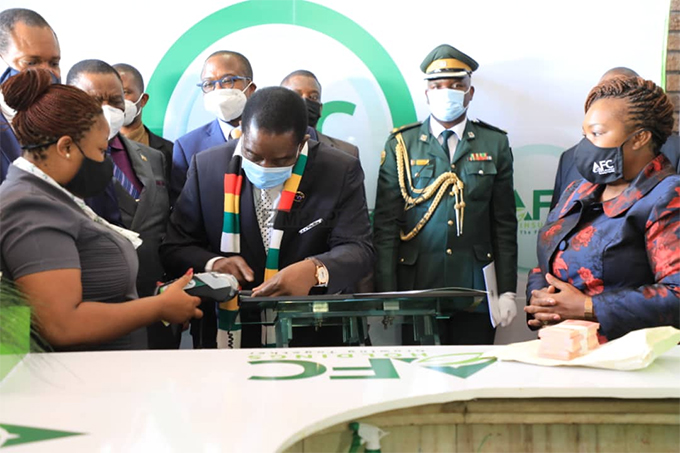 President Mnangagwa opens an account with AFC bank, in Harare this morning

The AFC would meet the financial gaps created by the withdrawal of support after the imposition of illegal sanctions on the country. The President was the first person to open an account and transact with the Land and Development Bank.

“This transformation will ensure maximum use of resources Zimbabwe is blessed with including fertile land, skilled human capital, abundant water bodies and beautiful fauna and flora, in order to improve livelihoods.

“The establishment of the AFC will therefore expand the provision of agriculture and rural financial services across the entire agriculture value chain, from communal, old resettlement areas, A1, A2 and large scale commercial farmers,” said the President.

He was confident that the bank would provide appropriate short-term and long-term financing at concessionary rates for farmers, especially in supporting the agriculture value chain, agro-processing, irrigation and infrastructure development, mechanisation and capacity building of farmers.

“Through the insurance company, farmers must also be able to access affordable financial products and services, targeted at mitigating the effects of global warming and other risks, for resilient and sustainable agricultural production,” he said. 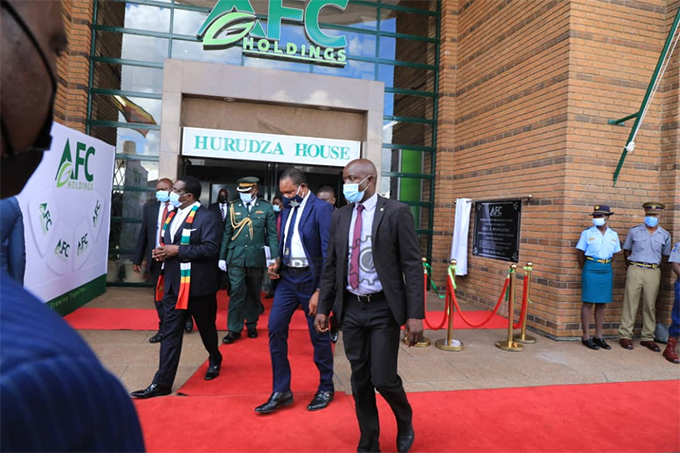 With regards to mechanisation, the AFC Leasing Company was challenged to expand its branch network, and conduct farming sector specific marketing campaigns for the services and products on offer. The company should embrace homegrown technologies to enhance productivity of farmers.

“Meanwhile, I urge farmers who will benefit from the various AFC financing facilities to embark on viable projects across the agriculture value chain. Growing exports and agro-industrialisation and the penetration of global value chains, must remain the main focus,” President Mnangagwa said.

Farmers were also urged to take advantage of the devolution agenda to create viable rural industries and invest in agriculture infrastructure.

President Mnangagwa warned that corruption would not be tolerated in accessing loans and called on the company to ensure that it had robust mechanisms that ensureloans were repaid.

In his remarks, Finance and Economic Development Minister Professor Mthuli Ncube said AFC Holdings was designed to expand financial inclusion of all categories of farmers.

The subsidiaries had to prioritise support to farmers in their operations and not venture too much into non-core activities.

The minister said given the strategic role of the Land and Development Bank, Government was looking at ways to strengthen its balance sheet by transferring unencumbered state land to its possession.