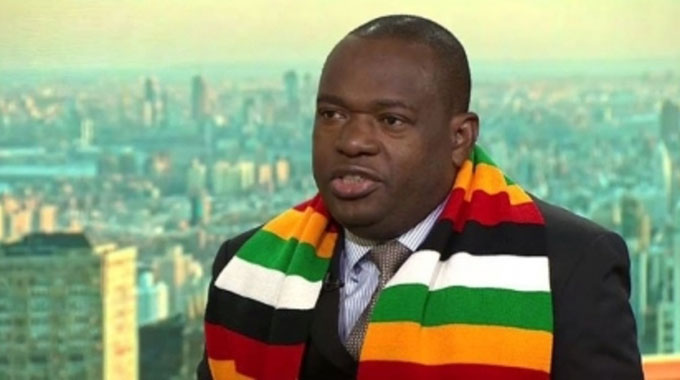 Herald Reporter
Foreign Affairs and International Trade Minister Dr Sibusiso Moyo has said there has been tremendous progress under the new political administration led by President Mnangagwa, as Government has set out on implementing far-reaching political and economic reforms.

Dr Moyo — who is in New York on a Wall Street charm offensive, which has since been described by Special Advisor to the President Ambassador Christopher Mutsvangwa as the “pantheon of global private capital” — was speaking in an interview with Bloomberg Television yesterday.

Bloomberg TV is an American cable and satellite business news channel owned by Bloomberg PL, which was founded by American billionaire Michael Bloomberg.

“The whole tremendous change and progress, which has taken place since the 24th of November last year when President Emmerson Mnangagwa took the oath of office, has seen tremendous change beyond recognition,” said Dr Moyo.

“In fact, the Government and new administration has taken over and started major reforms, which are mainly economic and a lot of agreed political reforms, and has started attracting investment into the country and has declared the country being open for business so that the rest of the world can see this awakening giant.”

Dr Moyo noted that Government was presently in the process of creating an environment attractive for investors.

This, he said, resulted in the review of the Indigenisation and Empowerment Act, which limited the 51 percent threshold to platinum and diamond.

But a new policy for the two sectors is also being developed, said Dr Moyo.

“And we are saying to the people of the world, the investors, to the international financial institutions and various fund managers, Zimbabwe is open for business and we are creating the appropriate environment which is easy to do business, which is critical that capital can find comfort to settle in.

“An example is our immediate reform which we undertook to reform the economic empowerment policy and Act, which now allows business to own the equity of their desired choice as they negotiate to enter into the business arena. But this of course is limited to the rest of the sectors of the economy, except in the diamond and platinum areas, where we are still developing a new policy in that regard.

“But a lot of reforms are taking place in order to open Zimbabwe for business and awakening this giant.”

According to Dr Moyo, Zimbabwe managed to work on political reforms such as amendments to the Electoral Act — which are before Parliament — and ease of doing business reforms in the first 100 days of the new political administration.

“The 100 days was a key management tool which was used by President Emmerson Mnangagwa to ensure that all the ministers who have got responsibilities are accountable not only to himself, but to the people as far as their success or otherwise is concerned,” he said.

“And we are saying as we continue on the path of ease of doing business, we believe we are going to be opening Zimbabwe for business.”

Zimbabwe, Dr Moyo said, “is incapacitated to make sure Zimbabweans in all capitals across the world are able to vote” although “the Constitution allows them to do so”.

Commenting on the status of self-exiled politicians such as Professor Jonathan Moyo, Dr Moyo indicated that the new political administration did “not chase anyone out of Zimbabwe”, adding that “if you have anything to account for, then you have to come and account to the people of Zimbabwe”.

Dr Moyo noted that American companies, investors and fund managers should follow the example of General Electric, which is exploring investment opportunities in the country.

In a separate interview on the same TV channel, Reserve Bank of Zimbabwe (RBZ) Governor Dr John Mangudya indicated that Government was trying to court investors to invest in all sectors of the economy.

He reiterated that the country would introduce its own local currency when it becomes able to generate enough foreign currency to support the local unit’s convertibility.

After engagements in America, the three-man delegation of Dr Moyo, Dr Mangudya and Ambassador Mutsvangwa would attend the Commonwealth Heads of Government Meeting (CHOGM) in London as observers.

The meeting, which started yesterday, will end on April 20.

Zimbabwe is on a aggressive re-engagement drive to end the country’s isolation and attract investment.