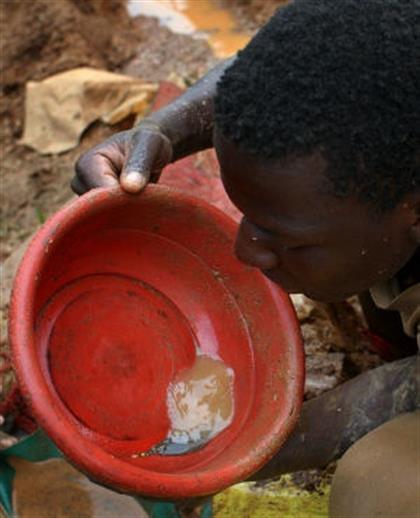 FILE: A miner sees flecks of gold dug and panned from a mine March on the outskirts of Bulawayo, Zimbabwe (John Moore/Getty Images)

The sound of steel pounding rock echoes through the dark, as Michael Machokoto, 23, hammers away, 40 metres underground, at one of the disused gold mining shafts at Jumbo Mine, located in the Mazowe area, 40km north of Harare.

Just two metres away, his friend, Tendai Gwature, 21, is also chipping away at the stone, hoping to find gold and buy food for his starving family back in the village.

The two friends left their jobs as cattle herders in rural Muzarabani, because their monthly income, eroded by steep inflation, was no longer enough to buy enough food, even for just one week.

Inflation in Zimbabwe is estimated above 400%, putting pressure on the cost of living.

There are a dozen other men digging alongside Michael and Tendai underground, trying to eke out a living through gold panning. Usually, at this time of the year, these men would be in their fields, taking care of crops. But with Zimbabwe in the grip of a major drought, many have turned to pits and shafts in search of gold.

With the mining and marketing of gold having been relaxed to accommodate artisanal miners, including panners, gold is the easiest way to get access to scare US dollars, still the currency of choice for grocery traders, despite it being officially banned from use for all local transactions.

For Michael and his friend, their toil does not end when they find gold. If they strike it lucky, they will also have to contend with violent machete-wielding gangs looking to rob them.

The gangs, popularly known as Mashurugwi, have been attacking miners underground and stealing their gold ore. Hardly a week passes without media reports of miners killed in the violence.

A week ago, one of the gangs killed police officer Constable Wonder Hokoyo, 27, and also left another police officer, Constable Kamhuka, seriously injured after attacking them with machetes, axes, catapults and logs. The police officers were caught in the crossfire while defending workers at Good Hope Mine in Battlefields, near Kwekwe, 212km west of Harare.

While President Emmerson Mnangagwa has pledged to root out the perpetrators of the violence, miners feel more could be done to protect a sector they see as an exit from poverty.

In 2018 small scale miners (including panners) contributed 63.3% of the 33.2 tonnes delivered to the country’s official gold buyer Fidelity Printers and Refiners.

According to Mukasiri Sibanda, an economic governance officer with the Zimbabwe Environmental Law Association which also deals with mineral resource governance issues, there is increased activity in the gold mining areas because of the recent drought.

“Because of the drought and economic challenges being experienced in the country, many people, including criminals, in form of these machete gangs, are turning to gold which makes it easier to access US dollars. The market is flooded by illegal buyers both local and foreign nationals so competition is stiff.

“A lot of people have turned to gold milling and buying, but what this has done is to increase competition and now some are sponsoring terror groups for easy access to gold,” said Sibanda.

He said increased competition also meant some would not risk going underground and come out with nothing but would rather pounce on successiful miners.

Zimbabwe Miners Federation president Ms Henrietta Rushwaya says there is need for a concerted effort to eradicate violence in the artisanal small scale mining sector, as the costs of inaction is just too great.

She said members of her organisation are accredited and can be easily identified as genuine miners.

Not unlike blood diamonds, the gold being extracted from Zimbabwe, outside of any protocol, is slowly turning into bloody gold.