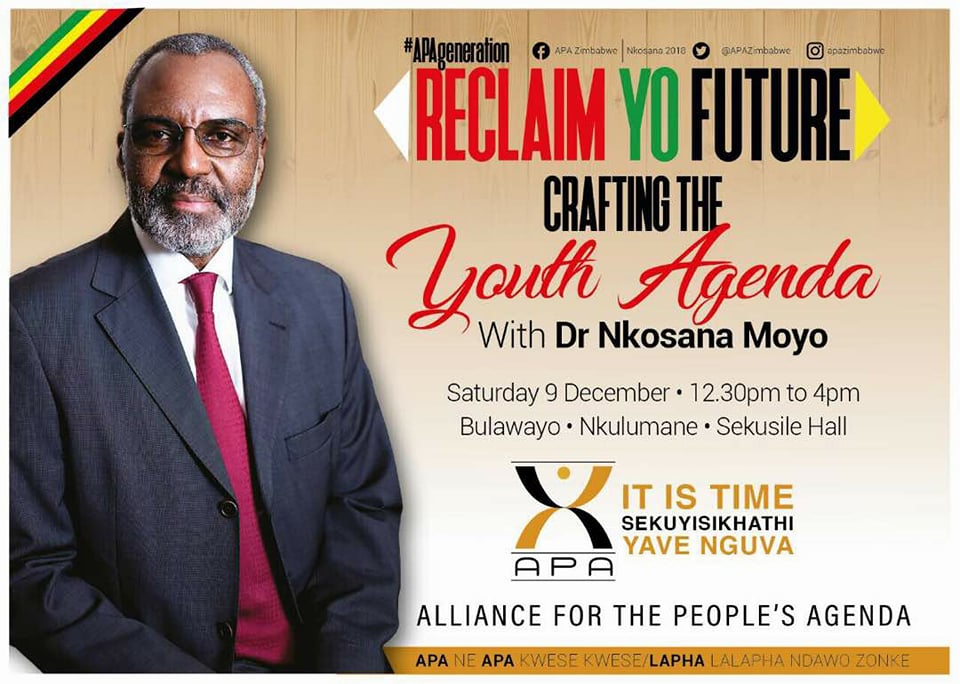 By Paul Nyathi | After declaring that his party will not hold any public gatherings, leader of the Alliance for People’s Agenda (APA), Dr Nkosana Moyo will instead be holding his first public rally in Bulawayo this weekend.

Convened under the banner “Crafting a youth agenda,” Moyo will be appearing in what will definitely be his first public rally to kick start his campaign for the 2018 elections.

Announcing his party’s campaign strategy for the elections six weeks ago, Moyo shocked many people when he said that his party will not be holding any public gatherings nor printing any party regalia and posters more so depicting his face promising to instead use a different unmentioned strategy.

The meeting set for Bulawayo which is being intensively advertised by the party through social media in a poster with Moyo’s picture has attracted huge criticism from the critics who are questioning what the gathering entails which is different from a political rally.

Contacted by ZimEye.com for a comment on the matter, Moyo was not in a position to give details claiming that his media team instructed him never to give any interviews to ZimEye.com alleging that the paper has a negative agenda against him.

“My media team specifically blocked me from giving any interviews and comments to your paper and that’s what I will stick to unfortunately,” he said.

The former Minister in President Robert Mugabe’s cabinet had initially ignored responding to written questions sent to him on his party’s position regarding the prevailing political situation in the country.