No fence will stop us we are hungry: Illegal Border Jumpers

As the economic crisis worsens in Zimbabwe, residents in Beitbridge look to neighbouring South Africa for their survival.

Source: No fence will stop us we are hungry: Illegal Border Jumpers – The Zimbabwean 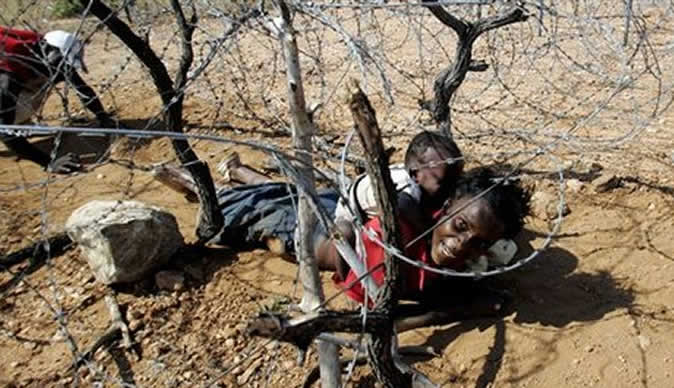 Many a resident have now taken to crossing into the neighbouring country without fear as they use unguarded routes to Musina about 10 km’s away.

There are various routes from the borderline which is frequently used by those who are sent to buy groceries which have become unaffordable in Zimbabwe.

Normally the trek to the borderline begins just after 10pm and it takes less than 30minutes to cross the Limpopo River to the South African side.

Many Zimbabwean’s have not let the newly erected razor fence deter them, once across the walk begins, there are scouts who inform those who crossed where the soldiers are camped.

Usually, combis have been hired to ferry the border jumpers to Musina but due to certain restrictions they now walk through the bush which they claim is much safer to avoid detection.

Normally the group numbers around 10-15 and arrive in Musina early hours of the morning where they then await in the bush close to the Extension 4 suburb.

Normally all going to plan, a combi is hired and the border jumpers go about their business.
Certain Bangladashi businessmen are believed to then arrange the transport back to the borderline for a fee.
While the Beitbridge port of entry remains closed, border jumping has increased though there has been an increase of military presence especially on the South African side of the border.
Decades ago the issue of amaguma guma caused a headache for local law enforcement but it has been brought under control.

Amaguma guma were believed to have been former soldiers from the Zimbabwe military who went awol operating on the South African side of the border.

Countless border jumpers over the years were either robbed, raped or killed.
Farmers on the South African side of the border have laid countless complaints of lack of border security due to farm fences being cut which has caused countless thousands of rands damage as livestock have been found wandering outside farms.

Farmers in the past provided assistance to the South African National Defence Force in providing them with transport.

During the eighties and nineties the razor fence was constantly monitored as well as electrified due to fear of liberation movements including the ANC from entering South Africa from neighbouring states.
Due to the curfew in Zimbabwe the group normally cross back into Zimbabwe once they are informed that there are no soldiers.

Once back in Zimbabwe, transport is organised and the group head back to Beitbridge town.
As one Zimbabwean said, “Due to the hardships we face in Zimbabwe daily, fence or no fence we are hungry and it will not stop us as we have children to look after, ED(Mnangagwa)has failed us but we can not fail our kids no matter the risk”.

Botswana as well has reported a rise in illegal crossings into that country, the Botswana Defence Force(BDF) have intensified patrols along their border, villager’s have complained that their livestock have been shot and killed by BDF soldiers and there are numerous reports of BDF using live ammunition on illegals who flee back to Zimbabwe.

Zambia as well has intensified patrols along its border, in the past Zimbabwean’s would normally be granted a day pass to do their shopping in nearby Chirundu but since the lockdown, Zimbabwean’s now cross by boat.