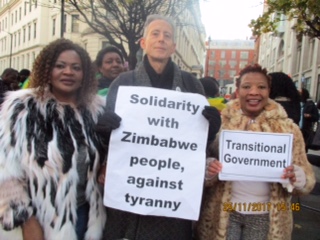 The Vigil is calling on the British government to insist that President Mnangagwa accepts independent observers to ensure the fairness of the elections he said would go ahead next year.

To maintain his grip on power, Mugabe only allowed access to observers from countries he regarded as allies. The result was that repeated elections were stolen with barely a squeak from observers.

The Vigil was surprised that Mnangagwa didn’t delay the elections because, under present conditions, it would be a major challenge to hold free and fair elections by the deadline of next August.

All the opposition parties have insisted that there must be a new voters’ roll and that the partisan election commission must be replaced. They also want the diaspora – comprising up to a quarter of the population – to be allowed to vote. This was provided for in the four-year-old constitution which has still not been fully implemented.

All this could conceivably be done if there was a serious will to do so. But this, unsurprisingly, appears completely lacking. At his inauguration, Mnangagwa made clear he has other priorities, offering some bland words about reforms to encourage investment. Indeed, after one speech he was heard to observe in Shona ‘the dogs may keep on barking but Zanu PF will keep on ruling’.

For real change we have launched the following petition:

Zimbabwean exiles and supporters welcome your visit to Zimbabwe and believe the UK has much to contribute to the country.

The euphoria over the removal of the Mugabes has given way to realisation that nothing else has changed. The new leader Emmerson Mnangagwa spoke of democracy but also made clear his overriding allegiance to Zanu PF, which has repeatedly shown it does not believe in democracy.

We urge you to insist on free and fair elections in Zimbabwe to determine the will of the people before the UK offers support to Mnangagwa. In particular, we stress the importance of the following:

5.     Police reform and the disbanding of the Central Intelligence Organisation

FOR THE RECORD: 42 signed the register.