The gang of eight most wanted suspected armed robbers, including the notorious Musa Taj Abdul (46) and their police officer host who were arrested in a major raid in Beitbridge on Monday, is now in Harare for further investigations.

A manhunt is in progress for four other suspects who managed to escape during the raid.

The eight arrested were moved to Harare under heavy Support Unit guard on Tuesday by CID Homicide.

An application was made to the Harare Magistrates Court for a warrant to hold the armed robbers a little longer for questioning at Harare Central Police Station. 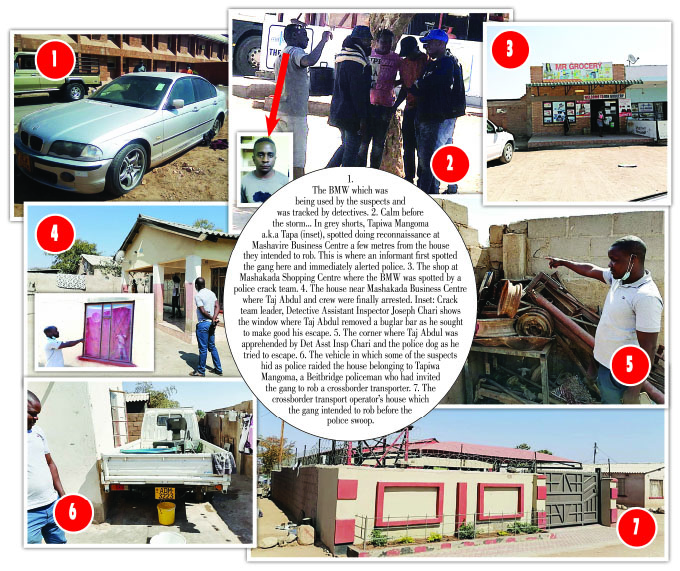 He managed to elude all attempts to handcuff him until Monday. Others have warrants outstanding from 2018 and 2019.

Of the four who escaped when a Beitbridge house was raided, Abednigo Dhlamini and Elias Mpofu, alias Jabulani or Obasanjo, are believed to have crossed into South Africa, but Brian Murape and Carlington Marasha are suspected to be still in Zimbabwe.

The gang is suspected to have committed most of its robberies in Harare.

Police have been chasing Abdul for close to two decades, but his run came to an end on Monday when he was grabbed together with a fired former Masvingo Central police officer Rudolf Kanhanga alias Tapiwa Munatsi (29), Liberty Mupamhanga (29), Prince Makodza (31), Godfrey Mupamhanga (27), Charles Lundu (47) and Innocent Jairos (32).

A silver Noringo pistol with an obliterated serial number and a magazine with 11 rounds, 19×12 bore gauge live rounds in a webbing belt placed in a black satchel stashed in a washing basket, and a pair of number plates AEX 1577 were allegedly recovered from the suspects. A balaclava was found stashed in their getaway car.

The gang has been sought in connection with a number of armed robberies, including the Mashwede case in Harare recently.

Investigations will be looking at the chain of evidence that could tie the arrested men to the robberies, with any prosecutions having to show, beyond reasonable doubt, that those in custody are the ones who committed the suspected robberies.

Sources said Abdul, who was once convicted in 1995 for tampering with a motor vehicle, is also wanted for questioning in Botswana and South Africa over robberies in those countries, and Zimbabwean police will soon advise their counterparts.

It is believed the gang owns several properties in South Africa, bought through proceeds of criminal enterprise.

In one of the recent cases, members of the gang are suspected to have been the robbers who raided Trauma Centre in Borrowdale and stole a safe containing an undisclosed amount of cash and cellphones, using two rented cars in the robbery — a silver Toyota Fortuner and a Honda Fit.

The Fortuner, suspected to have been driven by Abdul (alias Musa Mahommed or Kedha), was rammed by a senior manager of the centre and was then dumped in Borrowdale, while the gang escaped in the Honda.

Investigations revealed that before raiding the medical facility, the robbers had first raided a house in Queensdale where they got away with cellphones and masks.

The arrested men are also suspected to be the gang that undertook a spate of armed robberies in Harare starting on December 20 last year when at around 3.30pm they allegedly pounced on Culdees Honye (33), Wilfred Motsi (51) and Cornelius Mutandwa at Wessec Sol Enterprises, pointed guns at Honye and ordered her to lie down before they grabbed Motsi, who was a customer making inquiries, searched him and took his Tecno Spark 4 and Samsung cellphones.

The robbers took the two safes and loaded them into an Isuzu KB 240 single cab truck owned by Motsi.

The robbers then confronted a security guard with Fawcett Security, disarmed him of his service firearm and drove away in the stolen vehicle which was later found abandoned in the Arcturus area together with the two safes which had been forcibly opened.

The suspects are also thought to be the gang that broke into the house of Jealous Chuma 10 days later at 11pm. While inside, the robbers assaulted Chuma with logs and shovels demanding cash and valuables and after ransacking the house stole a 20 litre bucket containing $25 000, US$900 and R800, which was in a cashbox inside the bedroom and vanished with it.

A third robbery thought to have been committed by the gang took place on February 5 this year when robbers pounced on Jairos Jeke (33) and his brother, Simbisai (30) at Makoni Shopping Centre at around 2pm.

Upon arrival in a car, they fired several shots into the air from their pistols and an AK47 rifle before confronting the victims, whom they assaulted with metal bars demanding cash and valuables.

One of the robbers, who was brandishing an iron bar, broke Jairos’ motor vehicle windows and ordered him to surrender his firearm and then searched Simbisai’s motor vehicle and took a bag, which had $37 000 and a Samsung S9.

They allegedly barged into Jairos’ car and drove off at high speed following their getaway vehicle towards Dema.

In a fourth case in which the arrested men are suspected of being involved, robbers pounced on Rodney Dangarembizi (40), Dumisani Moses Dube, Tinashe Masango (28), Faith Nyambirai (27) and Betty Chitando (22) on 26 February at around 7.50am, confronted Dangarembizi, who was standing beside his vehicle in the garage at home, assaulted him with open hands demanding cash and valuables, before taking US$3 000 from his pockets.

The robbers demanded more cash and force-marched Dangarembizi into his main house which they combed and stole US$37 000 cash, jewellery, several pairs of shoes, an Apple laptop and car keys which were in his bedroom.

They went on to open a gun cabinet where they stole a 9mm Star pistol and 120 rounds of ammunition, a Samsung AZ core and a Huawei Nova 4.

Dangarembizi was force-marched at gunpoint to his garage where the robbers ordered him into his Honda Fit. One robber took charge of a white Hyundai belonging to the businessman, and demanded to know the whereabouts of Mr Tawanda Nyambirai, the owner of the TN Holdings premises next to Dangarembizi’s home.

Dangarembizi led the gang to the TN Holdings premises where they confronted other complainants. The gang searched Dumisani Dube and stole US$250, an HP laptop and his Samsung J1.

The robbers demanded to be taken to the offices of the company’s CEO and the location of his safe.

Dube led the robbers to the CEO’s offices on the second floor, where they forced open the door and stole a Chubb safe with US$180 000 cash and an Acer laptop.

The robbers loaded the safe into the Hyundai stolen from Dangarembizi and drove away.

They later dumped the two stolen vehicles at the Mazowe Citrus kiosk along Harare-Bindura road. Dangarembizi lost US$227 250, R28 000 and two motor vehicles valued at US$10 000.

In South Africa, Abdul is thought to have been arrested several times but released with the help of his police connections.