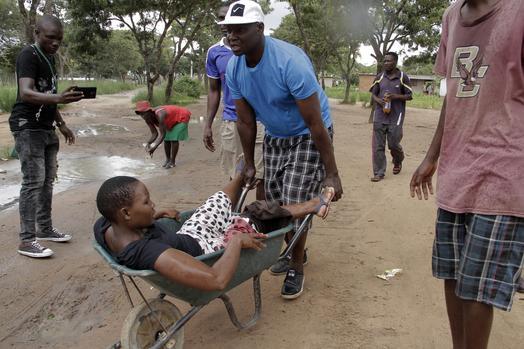 A woman with a gunshot wound in the leg sustained during clashes between protesters and police, is transported in wheelbarrow to a medical facility. Picture: ANA / Facebook

‘Thousands of homes have been raided, hundreds of people were tortured, assaulted and detained by the police,’ said Numsa’s Irvin Jim.

The National Union of Metalworkers of South Africa (Numsa) today said it “condemns Zanu-PF for inflicting misery on the Zimbabwean people”.

A call by the Zimbabwean Congress of Trade Unions (ZCTU) for a three-day stay away, which began on 14 January and prompted by massive fuel hikes, was met by a violent crackdown by security forces.

“The working class heeded the call and demonstrated in the streets against the austerity measures. As punishment, the government has unleashed the state security machinery onto the population,” said Irvin Jim, Numsa general secretary.

“Thousands of homes have been raided, hundreds of people were tortured, assaulted and detained by the police. At least twelve people have been killed.”

Zimbabwe President Emmerson Mnangagwa had to cut short his visit to Europe, which meant he missed the World Economic Forum at Davos in Switzerland.

He called for dialogue between the ruling Zanu-PF, the opposition MDC Alliance, civil society and religious leaders to find a way of saving the once prosperous southern African nation from a total meltdown.

But the olive branch was seemed less than sincere with the arrest of a senior union leader, and ongoing trial of about 600 people arrested during the protests. Pastor Evans Mawarire of the #This Flag campaign is also among those arrested. He has been charged with subversion related to his role in calling for the stay-away.

Videos of security forces beating up people in Zimbabwe have been doing the rounds on social media. At least 12 people are known to have died in the crackdown. As many as 68 were treated for gunshot wounds. There are unverified reports that soldiers raped women in front of their children.

“We demand the unconditional release of the Secretary General of the ZCTU Comrade Japhet Moyo, and all other political prisoners who have been taken into custody. We support the ZCTU which is demanding a stop to the military crackdown on labour activists and all citizens, which is continuing,” said Jim.

“We salute the masses for acting with courage and for rejecting the austerity measures which have been imposed on them by the Zanu-PF government. It is clear to them that the removal of former president Robert Mugabe did not result in an improvement of their conditions.”