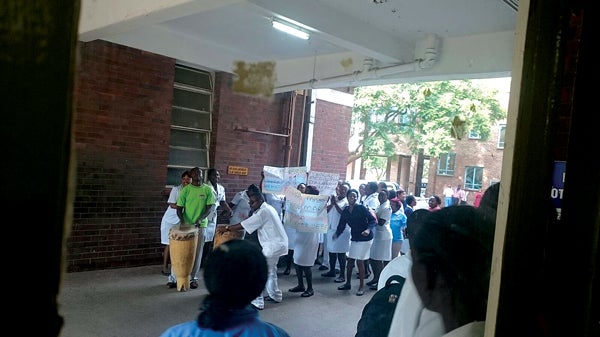 THE Zimbabwe Nurses’ Association (Zina), which declared a deadlock with government over salaries, has issued a 14-day notice to the Health Services Board (HSB) for industrial action. It says its members are not seeking an increment, but an adjustment to match the interbank rate.

Zina president Enock Dongo said a stalemate has been declared because government was not forthcoming on the demands by the health workers and a strike was imminent.

He said the health workers wanted return of their salaries that were pegged using the 1:1 parity between the United States dollar and surrogate currency the RTGS.

“All health workers have agreed to issue a 14-day notice to the HSB to address the issues that were raised,” Dongo said.

And in a statement released on May 23, the health workers said: “This communication serves to inform you that negotiations that have been taking place with the employer have failed to yield positive results and we are, therefore, issuing a notice of intent to embark on an industrial action in the next 14 days if our grievances are not addressed.”

Zina, which issued a 14-day ultimatum last week after the health apex council failed to agree with the employer, said now that government has changed goal posts regarding the 1:1 exchange rate and introduced the interbank rate, their salaries must be adjusted to reflect the change.

“We are not asking for any increment as we approach June where government promised to adjust our salary, but we are simply saying let our salaries match with the interbank change rate,” Dongo said.

The nurses said they were now demanding that the June salary be rated at the prevailing interbank rate.

“For example, if my salary is 800 RTGS, let us multiply that by the interbank rate of that day or month, for example if its 4,8 then my salary should be ZWL$3 840,” Dongo explained.

The nurses association boss said Finance minister Mthuli Ncube had after all said there were plenty RTGS dollars in the country and the change would, therefore, not give government any headache.

“For fuel, it is already happening so the same should apply to our salaries as well. Failure to do that, we are incapacitated to report for duty,” Dongo said. The issues that were tabled include cost of living adjustment, flexible working hours, vehicle loan scheme and an improved working environment.

The Health minister Obadiah Moyo recently said they were working on improving the welfare of the health workforce which has been operating with scarce resources, especially in public hospitals.