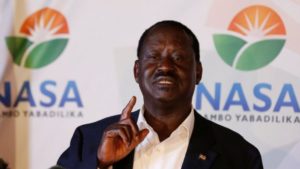 I have learnt of the passing of former Prime Minister Morgan Tsvangirai with deep sorrow.

I considered Morgan a champion and a distinguished political leader of the Second Liberation of Zimbabwe from the dictatorship imposed by Robert Mugabe and his Zanu-PF which destroyed the hopes and aspirations of citizens of a nation that was once regarded as a shining hope in Africa.

Morgan dared to dream of democracy, freedom and justice for his country and his people despite the firm hands of dictatorship that held sway. By standing up for these ideals, Mr. Tsvangirai inspired a generation, planted hope in down-trodden Zimbabweans that change was possible and loosened Robert Mugabe’s suffocating hold on the people and the nation.

Until his death Mr. Tsvangirai remained a source of inspiration to a generation of leaders across the continent for his courage and determination in the face of monumental odds. His death leaves a gap in a country that still needs strong and vigilant forces of change to return to the path of democracy and freedom. I pray that the party he founded, the MDC, will hold firm and pursue the ideals he lived for.

My family, our party the Orange Democratic Movement and the National Super Alliance join Mr. Tsvangirai’s family, the MDC and the people of Zimbabwe in mourning his death.