At the beginning of last year, the Government reintroduced Zimbabwe United Passenger Company (Zupco) buses in its quest to build a safe and reliable transport system. 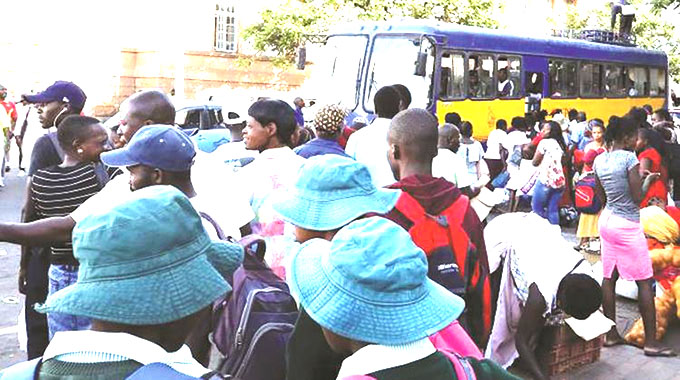 The buses brought relief to commuters as they helped them escape relentless increases in kombi fares.

The popularity of the buses brought with it new experiences, both good and bad.

I always wondered why boarding Zupco buses at some ranks was characterised by chaos, endless queues and overloading of passengers.

Having recently moved to Knowe, Norton, public transport, the Zupco bus in particular, became the cheapest option to commute to work for me and hundreds of other residents.

A Zupco bus ride from Knowe to Harare costs $2 for the approximately 45 kilometre trip.

Since there are no kombis offering direct trips on the Knowe-Harare route, one would have to first go to Katanga, also in Norton, to catch lifts to Harare.

Such a trip requires commuters to fork out $7 for a pirate taxi ride between Knowe and Katanga, then another $15 or whatever amount is charged for the Norton-Harare route. To cut costs, commuters from Knowe hike private cars for $10 to Harare.

With such challenges, the introduction of two Zupco buses on the Knowe-Harare route brought relief and episodes of drama, community building and new friendships, just to name a few.

They became more popular because low fares subsidised by the Government meant some people stopped driving to work to cut down on fuel costs, opting for public transport.

The day is January 7, 2020, and an InterAfrica Zupco bus known as “bus raMabhau or Bhonjisi” is loading opposite Doves Funeral Parlour, the bus stop used by Knowe residents. As the bus fills up, a long queue continues to form, as more people start trickling back from work and various other places.

Over 100 people do not make it on the first bus home and wait for the second one, a “chicken” bus known as Moyo’s bus.

We learn the marshals are Knowe residents who after volunteering to “maintain” order at the rank, later get a free ride home on the last bus.

To some, what they do is noble, while others feel they create confusion and chaos. I experienced both.

As they count people, they tell commuters to remember their spot as they would return to hand out some piece of paper with queue numbers.

Moments later, the two men write numbers on the small pieces of paper, sign them and hand them to commuters in the queue, the last being 90.

But, this is not without incident.

A group of commuters realises the first number to be allocated has changed and complains to keep queue jumpers at bay. A witch-hunt begins and the process is like a ritual.

It involves everyone shouting out their first allocated number and comparing it to what they now have.

Repeatedly, the two men ask each person to identify the person who was in front or behind them.

It’s like an interrogation as these marshals are feared. You are thrown out of the queue if you do not comply.

They finally find the culprit; a teenager whose mother immediately comes to his defence.

“We are travelling together and he had stepped away to buy bread,” says the mother. “That’s why he was not counted in the first place.”

She seems to get away with it and the witch-hunt comes to an abrupt end, disappointing those in the queue.

Also, no one wants to be labelled a snitch for selling out another commuter.

I am allocated number 81, having been told I was 78 during the first count. Being a holder of such a high number reduces my chances of boarding the bus.

What makes the situation worse on this day is that the bus crews claim they have been given inadequate fuel so they will only make single evening trips.

Moyo’s bus usually makes three incident-free trips in the morning and two dramatic ones at night, while Mabhau makes two in the morning, one around 3pm and the last around 5pm. On this day, the fuel situation has caused panic.

This means all those who do not get on the first bus will have to fork out $10 or more for the trip back home.

No one seems eager to do that.

As we wait for Moyo’s bus, people chitchat, keeping an eye at the front of the queue.

When one travels on a Zupco bus for long routes like Harare-Norton-Knowe, it is important to have strong inter-personal skills as anyone can start a conversation.

A group of men joins our conversation which is mainly speculation on our chances of getting on the bus given the numbers we have been allocated.

“Tinopinda chete (we will board)” we keep telling ourselves.

Tired women one-by-one start taking out their wrapping cloths and sitting on the dirty pavements. It is vital to have a wrapping cloth as it comes in handy whenever the bus delays.

Moments before Moyo’s bus arrives, the two marshals start arranging us, ordering those who were seated on the pavements to rejoin the queue.

The manner in which this is done is rather uncouth. We feel like schoolchildren being bullied by rascals. We are told to take out our tap cards and allocated numbers as they are our passage home.

On most Zupco buses, priority is given to those with tap cards as they would have paid in advance. Those without tap cards are usually the last on the bus, if there is space.

When queuing, one has to pay good attention to instructions.

“Anyone who misbehaves will be thrown out,” the marshal says.

The bus finally approaches as the two men, and three others, stand by the door cross checking the tap cards and small papers with the queue numbers.

At first, the queue seems to move, the door clear of many people — there is order. We are convinced we will make it as standing passengers.

But moments later, this semblance of order disappears.

A man donning a blue Dynamos Football Club T-shirt arrives and elevates himself to the front.

He immediately boards the bus. We wonder where he came from as he was not in the queue for the three hours we struggled with the heat.

A group of women, probably regulars known to the marshals, also attempts to board and commuters in the queue complain. The group is told to stand behind the marshals as they seem to “restore” order.

The line moves at a snail’s pace, and as the bus fills up, we are nowhere near the entrance.

A woman and her two teenage children who were not in the queue approach the marshals. She is allowed to board the bus, despite our protests.

“Vabva kupi, vabva kupi (where did she come from),” people shout.

The marshals tell us she has an ailment. A man who claims to have cancer also approaches them, then another and another. I lose count.

On the buses, people with ailments, pregnant women, the disabled and the elderly are given preference, and other commuters do not object to that.

But it seems not all cases are genuine.

Some cunning people take advantage and fake illness just to board first, creating suspicion even for genuinely ill people. I look at my number. My chances are getting slimmer and slimmer as the seats have all filled up and standing passengers also seem to take up space faster than the queue is moving.

Suddenly, women behind the marshals, one-by-one are given clear passage onto the bus. We complain and the artificial order vanishes.

The line deforms as men push and shove to get the last standing spots.

The marshals on the bus push back, it’s an uncomfortable episode of chaos. Some men succeed and the metal door is banged and locked from inside.

Those with numbers 71 to 90 have not made it onto the bus and hold onto their now useless pieces of paper.

Someone known to the bus crew who was not in the queue has taken their spot.

Dejected, like a hungry pack of lions, we surround one of the marshals who is not yet on the bus.

He denies any wrongdoing and apportions all blame on his colleagues.

We have lost this one to the corrupt activities of the marshals and rush to the point where private cars offer lifts to Knowe.

I soon learn the group of passengers who call themselves VIPs on the Zupco buses have liaisons, ranging from friendships to love affairs with the marshals and sometimes bus crew.

A dejected woman claims the marshals are paid by some commuters to reserve numbers and seats for them.

These get first preference and in one bus they even have seats reserved for them. It’s like the business class of the bus.

Sometimes the self-proclaimed marshals give out numbers one to four to queuing people. They then reserve numbers between five and nine for their colleagues who will come later.

We conclude some people are more important than others.

But for a Government-funded programme, this should not be happening as Zupco buses are a public good that should benefit everyone.

They should be managed  properly.

The chaos reminds me of my high school days when nothing like this happened as Zupco had proper terminuses where everyone would move in a single file, eliminating the need for marshal. Back then, it was first come, first served.

Deep down I pray for the return of such terminuses, maybe better modern ones.

Had we boarded Moyo’s bus, we could have arrived around 6pm.

The next morning, I am back in the Zupco queue waiting for Moyo’s 7am bus in Knowe, at a pick-up point known as Greyhouse.