On brink of ‘man-made’ starvation, Zimbabweans struggling to cope

Shifting policies on land reform and food subsidies by successive governments have contributed to the dire situation.

Bulawayo, Zimbabwe – Every morning, just before the daily power cut kicks in, Juliet Gumbo enters her kitchen to start preparing her meal. It will be her only food for the day, but she will have it hours later, when she returns to her electricity-lacking home after a day spent farming or hawking goods on the streets of Bulawayo, Zimbabwe’s second-largest city.

Gumbo, a 52-year-old widow lacking a steady job, is just one of many Zimbabweans struggling to cope with a scorching drought and economic instability that have pushed millions to the brink of famine.

Zimbabwe is in the grip of its worst economic crisis in 10 years, with inflation soaring to 300 percent and the population suffering fuel shortages, power rationing and currency woes. Emmerson Mnangagwa, who succeeded Robert Mugabe after a military intervention forced the longtime president to resign, has struggled to revive the economy while the long-standing financial troubles have been worsened by extreme weather shocks.

And now Zimbabwe is facing major food insecurity as many people do not have enough food to eat or they cannot afford it. According to Hilal Elver, the United Nations‘ special rapporteur on the right to food, the country is on the verge of “man-made starvation”, with close to 60 percent of its 14-million population being food insecure. 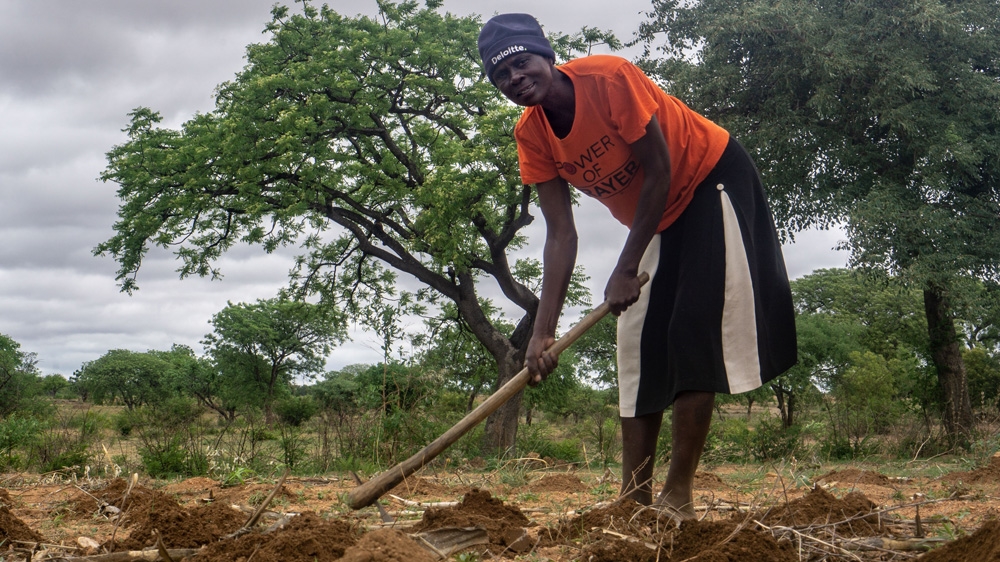 After an 11-day visit last month to areas hit by the El Nino-induced drought, Elver said the crisis affected a “staggering” 5.5 million people in rural areas and a further 2.2 million in cities.

“These are shocking figures,” she said, adding that notwithstanding the devastating effect of recurrent droughts and powerful cyclones, the crisis was partly due to chronic economic mismanagement, high unemployment, widespread poverty and rampant corruption.

In her statement, Elver also suggested economic sanctions by the United States and the European Union against officials and entities linked with the ruling ZANU-PF party over alleged abuses are contributing to Zimbabwe’s current malaise.

The government in Harare also says sanctions are impeding economic growth and “hurting ordinary Zimbabweans” – but the US embassy refutes the claim.

“Billions of dollars have been lost due to decades of corruption and harmful economic policies which have culminated in the current economic crisis. Implementation of economic and political reforms are the key to improving Zimbabwe’s trajectory.”

Analysts say years of shifting policies on land reform and food subsidies under Mugabe and Mnangagwa are also partly to blame for Zimbabwe’s food scarcity.

The country’s agro-based economy began to collapse following the state’s violent seizure in the 2000s of an estimated 10 million hectares (25 million acres) for redistribution from white commercial farmers to resettle the landless black majority. Mugabe’s government over the years resorted to price controls and money printing to tackle skyrocketing inflation and food shortages, but the measures impoverished local state-owned agricultural companies and contributed to the collapse of the local currency in 2009.

Although the removal of sanctions is a key demand of the post-Mugabe government’s re-engagement with the West, the country is battling to stabilise its economy as it transitions from a decade of using the US dollar as part of its multiple currency system.

But the reintroduction of a local currency at the end of February and, more recently, the reversal of a decision to remove a government subsidy on maize have failed to ease the situation.

Last week, Finance Minister Mthuli Ncube said the government is making “perfect” efforts to reform the economy and attribute the larger part of the crisis to natural disasters and bad luck.

“Who gets a cyclone, and then another, then drought then power outages?” Ncube told reporters on Wednesday, referring to this year’s farmland-ravaging Cyclone Idai and Cyclone Kenneth that followed it. “That is a classic example of being unlucky.”

But some consumers are doubtful if price controls will have any effect on escalating costs.

For Gumbo, her monthly state grant of 45 Zimbabwean dollars ($2.71) of her late husband’s benefits is inadequate to meet her living needs. With the price of mealie meal – a staple food made from milled corn – beyond her reach, she opts to plant maize hoping that she will be able to yield a harvest in March that could help her to survive a further six months.

“I still can’t afford it; today, they [the government] will say it’s 50 Zimbabwean dollars but the price will still go up in the shops,” said Gumbo, a sometimes seasonal farmer. “I’d rather plant and hope the rains will improve so I can have something to eat.” 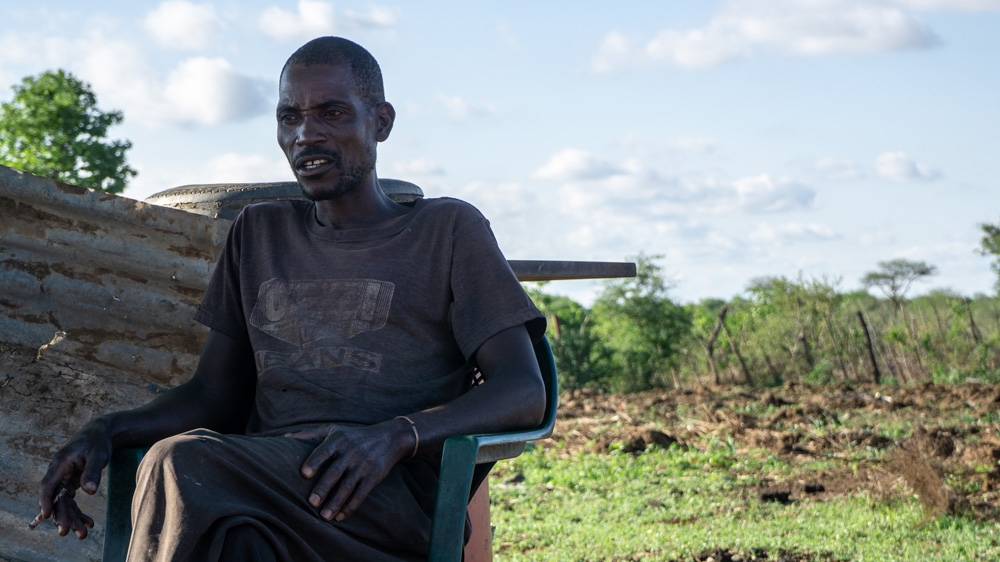 Zimbabwe’s food scarcity problems, however, are not recent. Once a regional breadbasket, the country over the past 10 years has been hit by rising food insecurity partly due to the fast-track land reform programme that saw a drop in agricultural production – mainly of dairy, beef and wheat.

While those who took over the white-owned farms have contributed significantly to the domestic consumption of corn, production remains insufficient to build up a store of grain reserves.

And now, even some of the resettled face eviction.

In the southern district of Umguza, an area 500km (311 miles) south of the capital, where some of the earliest resettlements took place, Sikhumbuzo Mlilo and his partner Buyiswa Moyo live on a plot apportioned from a white-owned commercial farm.

The pair, who have been farming the land since 2000, allege that in October they were issued with an eviction notice.

“We need to eat so we can survive, but if they tell us to leave this land after being here for so long, how do we plant our crops, where are supposed to go and find new land?” he told Al Jazeera.

The 44-year-old said the order made an already tough situation even worse for his farming-dependent family.

“Last [rainy] season we did not reap much from the harvest because the rains came late, so we’ve had to buy maize meal in town, but now it’s so expensive it’s hard for us,” he added. “We just can’t afford it.”

Following the toppling of Mugabe after 37 years in power, Mnangagwa pledged to end eviction of white commercial farmers while maintaining there was no going back on land reform. Though seldom, eviction of white farmers still occurs while resettled black farmers who are not productive on their land have been warned of expulsion.

Mlilo denies underutilisation and suggests the plots of those threatened with expulsion could be earmarked for a larger farming project for “those with money and good government connections” – a fear also echoed by other resettled farmers.

Since the land seizures, Zimbabwe depends on production by subsistence farmers to provide the bulk of its maize needs, but local wheat production is inadequate.

As a result, the country suffers from a cereal deficit with current production falling short of 761,000 metric tonnes needed for 2019-20, according to regional statistics from the UN Office for Humanitarian Affairs. Cereals and pulses such as wheat and soya beans are largely imported but due to chronic shortages of foreign currency, the government has struggled to pay for importation which has resulted in periodic shortages of bread and cooking oil. Meanwhile, over the past year, the price of bread has increased more than four times as bakers and millers struggle to keep pace with the quickly eroding value of the local currency against the US dollar.

Mangaliso Ndlovu, the former minister of trade and industry and current environment and tourism minister, acknowledged that inflation has drastically reduced the purchasing power of many Zimbabweans despite regular adjustments of civil servants’ salaries.

“The wages have not been aligned to the exchange rate and that has been the major challenge which we are gradually addressing,” he said.

“There is a challenge when it comes to food security and that is why we have put a flash appeal to the United Nations. When we talk of people going hungry we are literally talking about food on the table and this is a direct impact from the drought and this has stretched government’s social protection programme.” 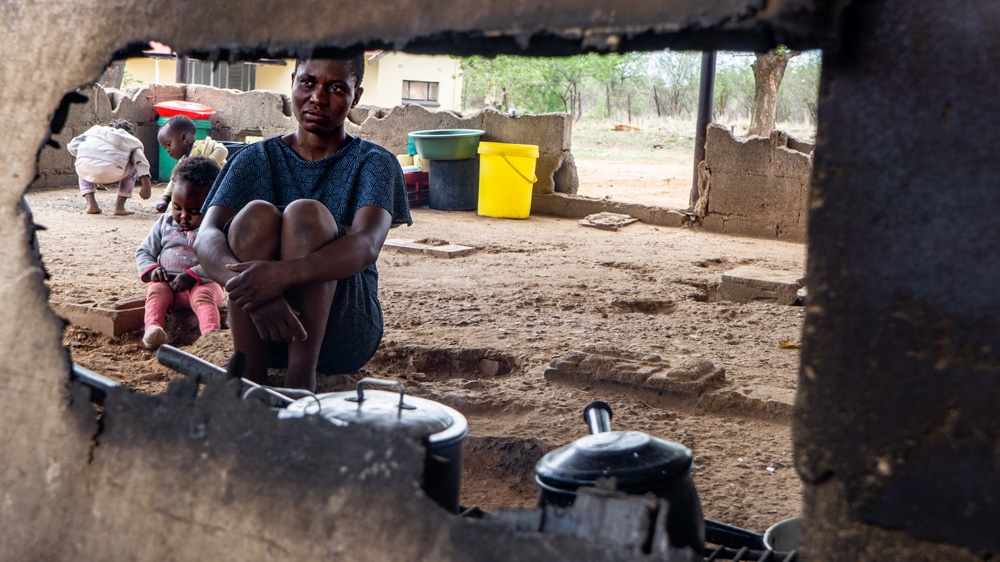 Nokusila Ndlovu goes without food to make sure her children have enough to eat, making a regional version of doughnuts when bread becomes too expensive [Tendai Marima/Al Jazeera]

In an effort to combat escalating prices, the government has launched the National Bakeries Programme, a series of community initiatives around the country where entrepreneurs use wood-fired ovens to make a cheaper version of bread.

The lower standard of homemade bread has not caught on, however, as the small bakeries struggle to produce enough to compete with bigger competitors.

Instead of buying bread, Nokusila Ndlovu, 27, an unemployed mother of four who lives on the outskirts of Bulawayo has resorted to making vetkoeks, a regional version of doughnuts, on an open fire to feed her children.

“I can go without food the whole day, sometimes I eat one meal, but my children can’t. So I have to find cheaper alternatives to bread. The price is just too much for me. So whenever I have money, I buy flour to make vetkoeks to keep them full,” she said.

In an attempt to plug the nutritional gap faced by low-income households, the World Food Programme hopes to deliver more than 240,000 metric tonnes of essentials during the first half of 2020 – but the UN food agency faces a colossal task.

The WFP has appealed for nearly $300m to meet Zimbabwe’s emergency needs, but less than 30 percent of funding has so far been guaranteed.

“Funds are required immediately for WFP to meet the growing needs of the hardest-hit Zimbabweans,” it said in a statement.