On the brink – Zimbabwe Vigil Diary 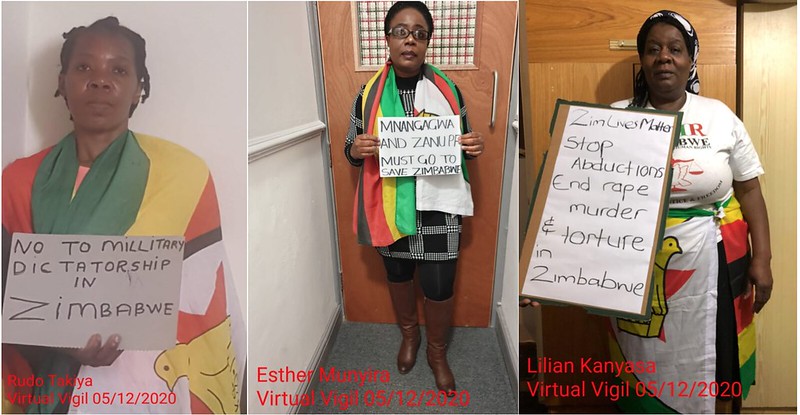 President Mnangagwa has launched a fierce attack on the West, accusing it of hindering Africa’s development. He was speaking at the groundbreaking ceremony for the new Museum of African Liberation in Harare.

Comrade Mnangagwa said: ‘To this day, our quest to the unhindered right to access and utilise our natural resources continues being hampered. In the case of Zimbabwe, sanctions constrain the realisation of our full socioeconomic potential. In the case of other countries on our continent, detractors continue to fund and fuel divisions so that while we fight, the pilferage and looting of our resources goes unchecked.’

He rambled on: ‘Let us never give in to the cunning machinations of neo-colonial forces in whatever guise.’ (See: https://dailynews.co.zw/ed-tells-off-western-countries/.)

Earlier the President had declared that Zimbabwe was on ‘the brink of greatness’. The remark follow a visit to the new parliament building nearing completion in Mount Hampden outside Harare.

Some pessimists think the Chinese neo-colonialists would have done us a greater service by spending their aid money on a more productive project than a new parliament for an increasingly one-party state. Mnangagwa said the new building would be a commitment to democracy and the rule of law. ‘We are proud of our institutions of government and our belief that all Zimbabweans should have a say in the running of our country’ (see: https://www.herald.co.zw/we-are-on-the-brink-of-greatness-president/).

Some might think the President is floating away on a cloud of mbanje. The government apparently sees export earnings from cannabis outstripping those from tobacco by almost three times next year following the legalisation of the drug for medicinal use.

The government has apparently issued 44 licences in the last four months and a Treasury spokesman Clive Mphambela said sales are forecast to reach US$1.25 billion next year. By comparison tobacco, Zimbabwe’s biggest agricultural export, made US$444 million this year. Finance Minister Mthuli Ncube said he saw: ‘immense potential’ in tax revenue from cannabis exports (see: https://www.bloomberg.com/news/articles/2020-11-30/zimbabwe-1-25-billion-plan-sees-cannabis-as-biggest-cash-crop).

The Vigil wonders whether the Treasury has been using medicinal cannabis for illegal purposes. Their predictions seem to be pie in the sky. Far from being an adventurous outlyer, they are a rather stoned late arrival. Everyone in the region is already involved in the cannabis industry. For instance, the potency of a strain of cannabis grown in Malawi is ranked as ‘the finest’ by the World Bank. The Malawi government also hopes, like Zimbabwe, that ‘Malawi gold’, (known locally as chamba) will help boost its economy.

Zambia and Lesotho have also decriminalised cannabis for medicinal purposes and South Africa has gone even further by decriminalising it for recreational use (see: http://www.zimvigil.co.uk/vigil-news/campaign-news/1110-malawi-pins-hopes-on-gold-standard-of-cannabis).

When they descend from the cannaboid clouds we can only hope that the government might help people grow food as well. They might realise that food is useful to keep people alive so they can vote for Zanu PF.