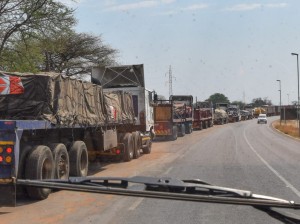 Trucks waiting for clearance at Chirundu Border Post before the introduction of the One Stop Border concept. The OSBP had significantly reduced waiting time at the border.

CHIRUNDU border officials have abandoned the one stop border post (OSBP) concept, which was meant to enhance customs clearances and trade facilitation. They have resorted to the old, cumbersome system, eroding the gains that had been registered when the one stop border concept was introduced in 2009, an expert has said.
An OSBP expert, Francis Chirimuuta, who has overseen the setting up of the concept in over seven African countries, said the concept, which was meant to be a pilot project to test the effectiveness of the concept in the 15-member Southern African Development Community (SADC) regional bloc, was a pilot project between Zimbabwe and Zambia.
Its primary objective was to facilitate trade and free movement of goods and services among member countries.

“The time spent at the border reduced from 120 hours in 2009 to 25 hours in 2012. Buses spent one hour at the border to get clearance as compared to the previous two hours. This meant that those in the transport sector managed to save up US$600 000 a day, while the volume of traffic increased by 65 percent. Trade inflows during the period increased by over US$1 million,” said Chirimuuta about the benefits of the OSBP.

“Unfortunately, all the achievements have been dwindling since the border officials have abandoned the OSBP procedures and have resorted to the conventional border operation systems,” he said.

He said the clearance duration at the border post had slipped back to four days partly due to the fact that when the OSBP was set up, it was meant to be a pilot project for study purposes in a bid to draw lessons for future projects.
“It must be noted that when we set up the post, we trained all the officials from Zimbabwe Revenue Authority (ZIMRA), Zimbabwe Republic Police, the immigration department as well as those from the Zambian side hence gains were realised between 2009 and 2012. However, the trained personnel then got transferred from ZIMRA and other border manning agencies. This, coupled with lack of monitoring and evaluation techniques, meant that all the gains achieved were eroded,” he said.

However, players in the transport sector blamed government for neglecting the project.
“There is need to be serious and not wait for conferences to be convened in order to correct such errors. Since 2012, government was not doing anything to save the investments injected into the Chirundu OSBP. Even though it was a pilot project, the development leaves one wondering if there is capacity to set up more efficient OSBPs,” said the source.

Constance Zhanje, director of bilateral trade relations in the Ministry of Industry and Commerce, said a host of challenges had affected the Chirundu OSBP. He said corrective measures were already underway.

“The Common Market for East and Southern Africa sent a consultant to find out the remedies needed to resuscitate the border and thereafter funding will be unlocked. We hope that it will soon be functional,” Zhanje said.   – By Alois Vinga