Zimbabwean Political detainee & opposition Member of Parliament Job Sikhala wrote this letter from prison which has been delivered to world leaders talking about not only his plight, but that of Zimbabweans. 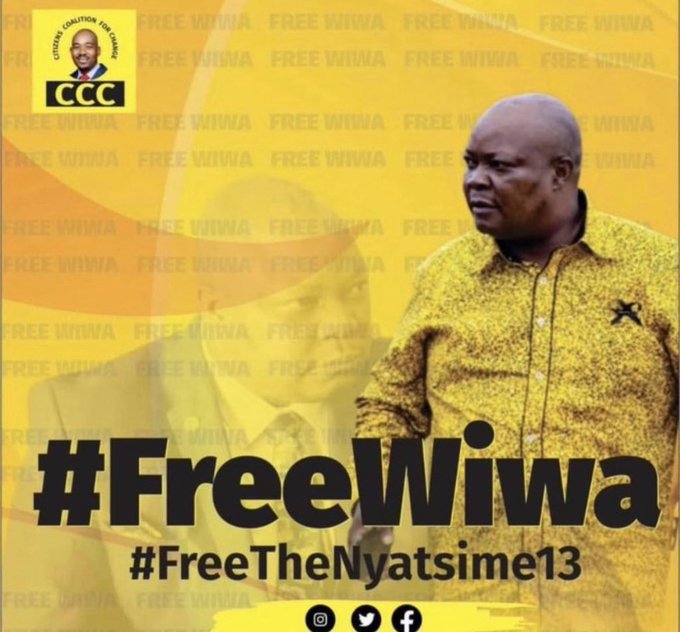 I write to you all, your Excellencies, Heads of State and Heads of Government in my capacity as a citizen of the global village. I am writing to you from a Maximum Security Prison in Zimbabwe, called Chikiurubi. Please bear with me on the way how this letter will reach your office as I have authorised my international lawyers Amsterdam and Partners (LF) based in Washington DC and London to circulate, and any Zimbabwean who would have come across it, to forward it to you.

My name is Job Sikhala, a Zimbabwean lawyer and opposition Member of Parliament, aged 49 years and a senior official of the Citizens Coalition for Change (CCC) political party.

On 14 June 2022, I was arrested by the Government of Zimbabwe and I am currently detained at Chikurubi Maximum Security Prison, for the umpteenth time. I was arrested together with another opposition Member of Parliament Godfrey Sithole, accused of the crime of incitement to cause public violence. Furthermore, the Government re-arrested me on 15 July 2022from prison and pressed more charges against me, this time charging me with defeating or obstructing the course of justice.

On 24 May 2022 a woman by the name of Moreblessing Ali, was abducted around 2100 hours and was later found brutally murdered. Her body was in a state of decomposition and cut into several pieces. Moreblessing Ali was a strong opposition activist whose murder is strongly linked to the ruling party ZANU PF.

After he abduction and forced disappearance on 24 May 2022, the murdered woman’s family engaged me to be their family lawyer. My instructions were to demand from the authorities the truth about her whereabouts and to demand justice for her. The Government in an attempt to conceal the truth about the circumstances around the depressing abduction, went into a hysterical public campaign against myself, through statements issued by senior Government officials and its propaganda mouthpieces inciting and calling for my arrest.

The campaign won and on 14 June 2022 at around 2000 hours the Government dispatched a swarm of its paratroopers, secret security agents and the police totalling over 100 members. They raided my house in the high-density suburb of St Marys in Chitiungwiza and arrested me.

Since that day of arrest to the present day I have been kept in prison at Chikiurubi, a concentration-camp monster on the outskirts of Harare. The prison resembles Adolf Hitler’s Nazi concentration camp and Josef Stalin’s Siberia. The Government courts have consistently denied me bail and are determined to keep me in this concentration camp.

HISTORICAL BACKGROUND OF MY PERSECUTION BY THE STATE

I started public leadership since my days as a student leader at the University of Zimbabwe in the late 1990s. I was elected as the Member of Parliament for the St Mary’s constituency in the year 2000 as a young graduate. I am currently the Member of Parliament for a constituency called Zengeza West. My troubles started soon after election into public office in the year 2000.

The late former President Robert Mugabe’s government arrested me more than 60 times until the time of his downfall. Despite the 60 arrests, I was acquitted of all the politically motivated charges against me. This was so because Robert Mugabe was not one to interfere with the criminal justice system, neither did he create funny courts to persecute opponents. The judiciary in the criminal justice system operated independently of the dictator of the Executive.

Furthermore, Mugabe had no command structure to dictate what judicial officers must do against his opponents. That is the reason why his most fierce nemesis, the late Morgan Tsvangirai was acquitted of the nefarious treason charge.

On all my troubles under Robert Mugabe’s reign, the State went overboard and tortured me in the 18 January 2003 together with my (then) lawyer Gabriel Shumba, my friend Charles Mutame and Taurai Magaya. The torture ignited international outrage. It became an important issue at the Commonwealth Heads of Government (CHOGM) summit held in Brisbane, Australia in 2003. It caused the swift exit of Zimbabwe from the Commonwealth.

After the downfall of former President Robert Mugabe from power in November 2017, the new ruler(s) intensified their persecution of my person. They arrested me on 26 June 2019 and accused me of treason. They alleged that I was plotting to overthrow the government using unconstitutional means. I was tried in the High Court in a city called Masvingo. I was acquitted of all the manufactured allegations.

The government did to surrender its propensity to persecute me. They arrested me again in August 2020 and the matter is still pending in the Courts up to the present accusing me of incitement to cause public violence over the public’s successful stay home of 31 July 2020.

There was no single incident ever witnessed in Zimbabwe. Unsatisfied they arrested me once more again with the prominent Zimbabwean journalist Hopewell Chin’ono and a prominent female lawyer and my Party’s spokesperson Fadzayi Mahere accusing us of publishing falsehoods using our social media handles. For the umpteenth time, they have arrested me again in 2022 – twice – and have thrown me into this concentration camp Chikurubi Maximum Security Prison.

FACTS ABOUT THE PRESENT ARREST AND INCARCERATION

As alluded to above I am currently being incarcerated at the most horrible place called Chikiurubi Maximum Security Prison since 14 June 2022 up till now.

It is very clear from everything that the government and their agents have said and done, that they are determined that I should not be given bail. Their reasons are political and have nothing to do with the law. They want maximum persecution knowing that their allegations against me are frivolous and vexatious.

PRESENT STATE OF AFFAIRS IN ZIMBABWE

Since the overthrow of the late President Robert Mugabe in 2017, Zimbabwe has turned into a nightmare for opposition political persons. More than 20 people have been arrested and charged with treason. This is three times more than all the persons charged with this offence during the 37-year period of Mugabe’s rule. At present more than 100 opposition members are facing various charges in the government’s courts of law.

What makes it even more bizarre is that senior opposition political leaders, prominent journalists, civic society leaders are being regarded as critics of the government and social activists are being dragged to a specialised court called the Corruption Court. The public’s anticipation was that it would deal with corruption cases only to find out that it has been turned into a persecution court for the opponents of the government. The cases for all politically related charges are given Ant-Corruption reference case numbers. This is unprecedented in civilised societies that uphold the rule of law, democracy and constitutionalism.

My current two manufactured charges by the government are before this court, a development that has eroded public confidence in the criminal justice system of Zimbabwe. The rule of law has totally broken down here in Zimbabwe.

WHAT DO I EXPECT OF YOU

Now is the time for the world to speak against the excesses of the Zimbabwe government against its citizens.

Member of Parliament imprisoned in Zimbabwe