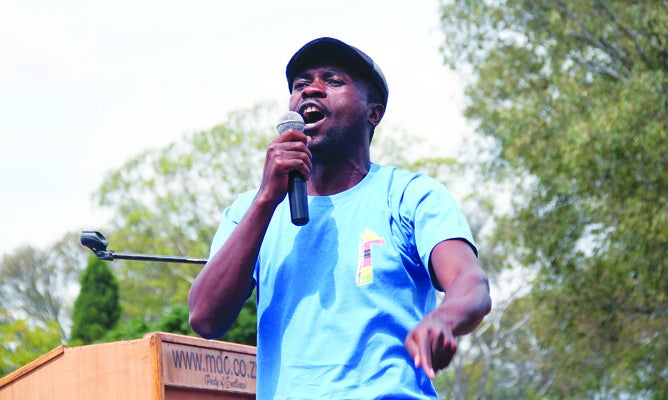 OPPOSITION MP Willias Madzimure yesterday demanded that Home Affairs minister Cain Mathema or his deputy, Mike Madiro, issue a ministerial statement on the progress by the police in locating the whereabouts of missing journalist-cum-activist Itai Dzamara.

For years, the Home Affairs ministry has been promising to bring regular reports in the House on progress in finding the missing human rights activist, but that has not been
happening.

Madzimure said it would be better for the police to put closure to Dzamara’s case to end the emotional suffering by his wife, Shefra and
family.

“It is more than five years since Dzamara disappeared and the Home Affairs ministry promised to give an update on his whereabouts,” he said.

“We have provisions in our statutes that deal with missing persons and it is high time that the Home Affairs minister comes to this House to give a report on the investigations done so
far.

“If there is need to declare Dzamara dead, then do that so that the family can have closure.”

Madzimure said the country’s Constitution stipulates that every person has a right to life and so Dzamara’s case must come to a conclusion.

Charumbira said he was a victim of a fake post of a pseudo-personality pretending to be him on Twitter who blasted President Emmerson Mnangagwa’s government for people’s suffering.

“It is not only happening in Zimbabwe. In the United States, 11% of social media accounts are fake and some have been used for fraudulent criminal activities. In Zimbabwe, we face a
serious situation of these fake accounts because popular individuals like the Head of State and Government, the army, the Central Intelligence Organisation or chiefs are used to
peddle lies through those fake accounts as if they have said something,” Mutodi said.

He said the Cyber-Crime Bill being crafted would deal with the issue of people creating fake accounts and defaming others by posting nude pictures.

However, Mutodi said it would be difficult to prosecute because the Constitution provided for freedom of information.

He said some of the people creating fake social media accounts were domiciled in foreign countries.

In an unrelated matter, Parliament yesterday also produced a statement saying they were a victim of a fake social media post, where claims were being made that the institution had
bought diesel coupons at Redan at an inflated cost of ZWL$10,50, which is way above statutory limits.

Journalist Hopewell Chin’ono had brought the matter to the attention of Parliament demanding answers.