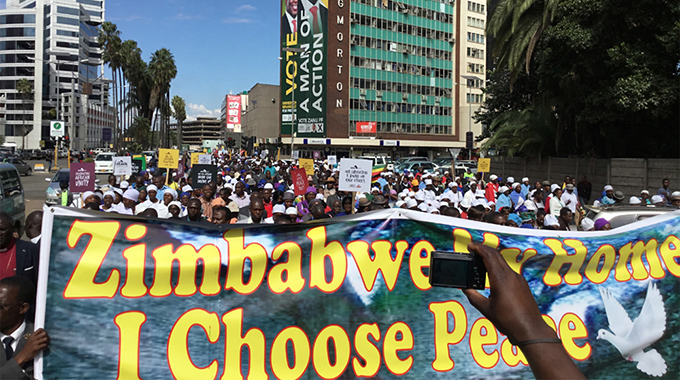 Bulawayo Bureau
President of the Zimbabwe Rainbow Democratic Party (ZRDP) Mr Cuthbert Ncube has hailed the peaceful environment obtaining in the country, saying his party’s campaigns that are in full swing have been violence-free. He said if the situation persists, the July 30 polls would be credible and transparent.

Speaking at a rally in Old Pumula, Bulawayo, last Saturday, Mr Ncube said his party appreciated efforts under the new dispensation for people to express themselves freely, as well as associate with the party of their choice.

Mr Ncube said his party is one-year-old, but has managed to garner support.

“We welcome the new era that has enlightened many of our countrymen to know about their rights,” he said.
“The battle has begun and so far since the Zimbabwe Rainbow Democratic Party started campaigning, it has been peaceful. We commend that and hope to experience the same even after the elections.

“What we call for is that all political parties respect the electorate. Our people have so long been denied basic rights such as freedom of expression. The time is now for us to vote in candidates that are going to give us economic freedom.

“There are certain unruly elements that are perpetrating violence and are reported to be influenced by some unscrupulous traditional leaders. We hope that situation is corrected as a matter of agency.”

Mr Ncube, who is contesting the Bulawayo East National Assembly seat, said this year’s election is “no child’s play” .
He said his party was preaching the gospel of peace in order for Zimbabwe to usher in a unified consensus to rebuild the country.

“ZRDP is founded upon the need for people to work together in an environment that attracts investment, prosperity and bring economic freedom,” said Mr Ncube.

“These forthcoming elections should not be about consolidating power. Individuals bent on uplifting themselves must not be voted into office. In our campaign we preach peace. It is our responsibility. As such we pray that institutions of authority allow people to choose leaders, be informed so that they upgrade their lives for the better.”

ZRDP has launched campaigns in various rural constituencies.
Mr Ncube said he has noted with concern how the dependency syndrome cultivated a system of surviving on handouts in most rural areas.

“Our people need to be redeemed from the yoke of dependency,” he said. “For how long must one be given handouts? No country can claim economic freedom if its people are reliant on gifts and aid.

“We as the future government are going to ensure that our people are provided for by the natural resources abundant countrywide. For that to happen, decentralisation has to be in place in order to foster development in rural areas.

“The end of poverty lies in the mindset of the people and that means starting to vote wisely. We have to promote good living in rural areas. ZRDP has a strong presence in Lupane and Nkayi where we have had proactive discussions with people, although we also have presence in other provinces.”