Opposition warns of protests after Zimbabwe election result is upheld 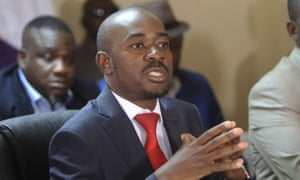 In his first comments since the country’s highest court overturned the opposition’s challenge to have the results annulled, Chamisa vowed yesterday to lead “peaceful protests”.

“I have a legitimate claim that I am supposed to lead the people of Zimbabwe,” the leader of the Movement for Democratic Change (MDC) party said. “Yes, judgment has been made, but as far as we are concerned we have a view that is contrary to the view of the constitutional court.

“The court’s decision is not the people’s decision. The people who voted do not believe in [Mnangagwa]. We have got a clear majority.”

Robert Mugabe’s successor as leader of the ruling Zanu-PF party won the election on 30 July with 50.8% of the vote – just enough to meet the 50% threshold needed to avoid a run-off against Chamisa, who scored 44.3%. The elections were largely judged to be free of the violence that had characterised previous elections in the country.

Chamisa insists he won more than two-thirds of the vote. “The legal door is not the only door to happiness,” he said. “Using our constitutional right, we have a right to peaceful protests. This is the route we will take. One of them.”

Mnangagwa took over from Mugabe after the long-time ruler was ousted following a short military takeover in November 2017 after 20 years as president. He vowed to hold free and fair elections and repair strained relations with the west, but his plan was marred when soldiers fired at protesters on 1 August, killing at least six people.

His inauguration is scheduled to take place on Sunday.