Our land is for Zimbabweans: President 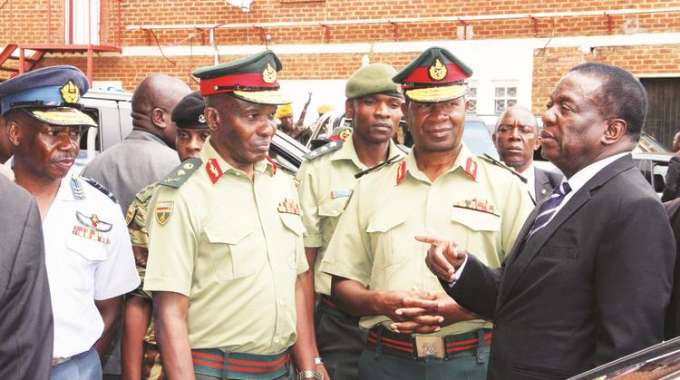 Source: Our land is for Zimbabweans: President | The Herald April 18, 2018

Felex Share Senior Reporter
Zimbabweans should safeguard the country’s independence and never allow foreigners to control their land again, President Mnangagwa has said. The Head of State and Government said a lot of blood was spilled for Zimbabwe to be independent, hence the need to cherish the freedom.

He made the remarks after viewing a local movie, “Chinhoyi 7” at Ster Kinekor, Borrowdale, in Harare yesterday.
The film is based on the 1966 Chinhoyi Battle, where the first shots of the Second Chimurenga were fired.
Yesterday’s private viewing was attended by Vice President Dr Constantino Chiwenga, Cabinet Ministers and service chiefs.
It also came as Zimbabwe celebrates 38 years of independence today.

“Many of our comrades, brothers and sisters perished in this war, but in the end the spilling of blood of our sisters and brothers brought us this independence,” President Mnangagwa said.

“We should cherish, defend it. Never again should we allow our land to be occupied by foreigners. The burden of defending our land, passing on the patriotism in our blood is upon us to pass on to generations to come.”
The film is expected to be premièred any time soon.

President Mnangagwa commended players behind the film, saying it marked the beginning of documenting the country’s history.

“May I say to the comrade who produced this film as well as those who participated in this film, that this is the beginning, I believe, of recording the history of our struggle,” he said.

“The Chinhoyi battle which happened in 1966 was the first open confrontation which took place between the liberation fighters and the Ian Smith military machinery. From that time on, several battles took place.”

Produced by Tawanda Sarireni and directed by Moses Matanda, the movie revisits the liberation struggle and corrects some misconceptions about the war.

It gives viewers a comprehension of circumstances that forced people to abandon their homes and sacrifice their lives for the liberation of the country.

Sarireni said: “It is the story of the liberation struggle. The idea was to tell the history of Zimbabwe which for many years has not been told.”

Sport, Arts and Recreation Minister Kazembe Kazembe said: “As a Ministry, we are excited that finally there is something that can tell the true picture of the liberation struggle, how it started and what transpired.

“Most of the people have no clue and when these things happened most of us were kids. This is the first step in the right direction and we hope that whey will carry on.
“It’s an eye opener.”

“Chinhoyi 7” is a movie about how Zimbabweans suffered at the hands of colonial masters and the pain freedom fighters endured in thick forests far away from their homes.

The cast includes Julia Shaw from Britain and Mori Miyuki from Japan (make-up artiste) as well as Cameron Morton, Greg Brown and Cynthia Stone (all from Canada).

It was produced with the help of the Zimbabwe National Army, which provided soldiers, a helicopter, guns and bombs.
The Zimbabwe Republic Police (ZRP) and Zimbabwe Prisons and Correctional Services (ZPCS) are also part of the production.
Scenes in the movie resemble real war situation and actors went to the real location of the Chinhoyi Battle for some scenes.
Besides Chinhoyi, the movie was also shot in Harare, Bulawayo, Victoria Falls, Honde and Concession.