President Mnangagwa hands over the Order of the Star of Zimbabwe in Gold Award to First Lady Auxillia Mnangagwa at the national shrine Harare yesterday.

Farirai Machivenyika
Senior Reporter
PRESIDENT Mnangagwa yesterday presented national honours to 39 individuals and institutions for their achievements and contributions to the development of the country.

Yesterday’s ceremony at the National Heroes Acre was the first time the honours were conferred to civilians.

An Office of the Registrar of Honours and Awards has since been established to superintend the national honours and awards system, within the context of present and future national realities.

First Lady Amai Auxillia Mnangagwa was awarded the Order of the Star of Zimbabwe gold medal for her philanthropic work together with Zaoga founder Ezekiel Guti and Sports Minister Kirsty Coventry. 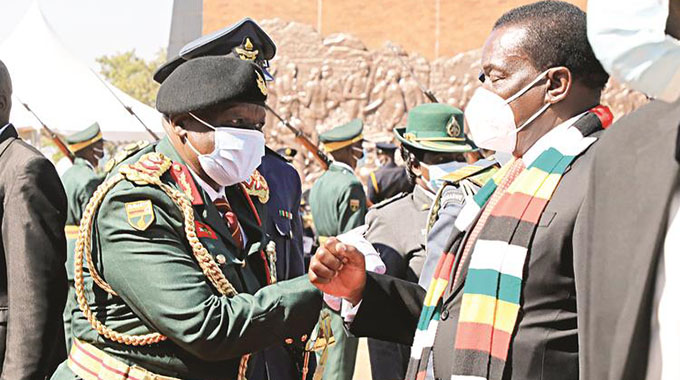 The UZ, MSU, NUST, Chinhoyi University of Technology, Africa University, Bindura University of Science Education, Harare Institute of Technology and Arundel Group of Hospitals were awarded the Jairos Jiri Humanitarian Award for their role in the fight against Covid-19.

The institutions of higher learning were recognised for producing personal protective equipment.

The UZ Medical School and Sally Mugabe Hospital were given the Meritorious Award for the groundbreaking operation carried out early this year to separate conjoined twins.

President Mnangagwa said the individuals deserved to be honoured for their services to the nation.

“The exceptional sacrifices made by some of our leaders, with a view to extolling their motivational, epoch-defining feats and enduring attributes deserve immortalisation,” he said.

“In this regard, awards have been created in their honour. The Robert Gabriel Mugabe Commendation Award for Outstanding Service Delivery in Human Capital Development will be awarded on the 21st of February each year. The Joshua Mqabuko Nyongolo Nkomo Commendation Award for Outstanding and Consistent Transformative Service in the Promotion of National Development, National Unity and Nation Building, will be awarded on June 19 each year.

“In the same token, the Herbert Chitepo Commendation Award for Outstanding and Excellent Service to the Community in the Field of Justice will be awarded on any international justice-related day.”

The President said the various awards re-affirmed Zimbabwe’s diverse, resilient and innovative character against all odds.

He added that Second Republic, had made strides towards honouring the heroes and heroines of the First and Second Chimurenga with the memorialisation of liberation battle sites, shrines, and restriction camps ongoing in various parts of the country.

Corruption watch: Reasons why Zanu PF is a thieving cult