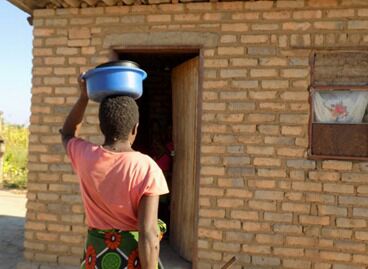 It is a beautiful Tuesday morning and Sarudzai (36) wakes up very early at the break of dawn to do her household chores and prepare her eldest 12-year-old child for school.

Limping, she does her chores methodically and thoroughly. Sarudzai is living with a disability, her left leg is deformed since birth but she has mastered the art of doing everything on her own and fend for her family. 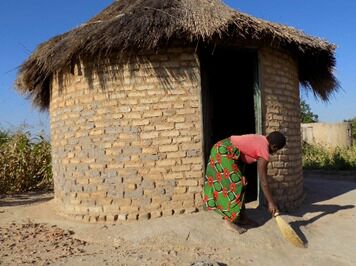 The married mother of three from Mutimuri Village in Chegutu District is living with HIV but she has since accepted her status and is living healthy and inspiring others in her community.

Every Tuesday, Thursday and Saturday she takes her 8-month-year-old child for the Early Childhood Stimulation Sessions (ECS) at Monera Clinic and is determined until she graduates. ECS is a program designed to assist positive child development for HIV exposed infants. This is her story!

Sarudzai enrolled on Antiretrovirals (ART) in 2015 when she was identified by a palliative care trained Village Health Worker (VHW) who encouraged her to go to the local Clinic and seek HIV Testing Services. “At that time I was pregnant with my second child and always sick, I had lost weight and Anita Banda a VHW noticed that my health was deteriorating. At first I hesitated, I was scared and did not know what to expect. I went to Monera Clinic and was tested. The result came out positive for HIV.

I was shocked and could not believe how it happened. I went back home and told my husband who said nothing at all. Unbeknown to me, he already knew his status and he was scared to disclose. It was not easy accepting the situation but Mrs Banda took us through counselling sessions and my husband and I were enrolled on ART,” said Sarudzai

“Since I was pregnant I was also booked early for Antenatal Care (ANC), Prevention on Mother to Child Transmission (PMTCT) training and started ECS Sessions at Monera Clinic.

I was encouraged to deliver at that specific facility, adhere to my medication and eat healthy. That same year I gave birth to my second born Tatenda*.

I religiously went through the process following all the procedures such as exclusive breast-feeding, giving my child nevirapin and cotrimoxazole for the first six months. Concurrently conducting routine medical check-ups. After 9 months, the baby was tested and the result came negative!

I was ecstatic and couldn’t believe it when the nurses told me. I attribute it to the support from Mrs Banda and the nurses at Monera Clinic,” said the visibly happy Sarudzai.

“Last year, I delivered another bouncing baby boy, Tafadzwa* who turned 8 months in April this year and went through the same process again. This second time around I was more experienced on ANC and as you can see, he is very healthy.

Soon after, I was enrolled for ECS sessions. USAID- PEPFAR Orphans and Vulnerable Children (OVC) Program supports the ECS sessions in our community, being spearheaded by Hospice and Palliative Care Association of Zimbabwe (HOSPAZ), and its implementing partner Tsungirirai Welfare Organisation. We are 25 in the group and meet on 3 days weekly at Monera Clinic and we will be graduating after 12 sessions,” she said

Although significant progress has been made in the past decade, HIV remains one of the top health threats facing the people of Zimbabwe. ECS provides guidance on PMTCT for mothers from birth to post weaning. Mothers are encouraged to register early for ANC and continually support their children’s development at home using locally available materials e.g toy making since most of the exposed babies face so many challenges in reaching their milestones like crawling, standing and walking. With the support of a trained mentor mothers and ECS facilitators like Mrs Banda, mothers will have the opportunity to share health information mainly positive living, adherence, child stimulation and child rearing practices.

Since 2015, USAID Zimbabwe has been funding HOSPAZ (the coordinating body for all organisations providing palliative care in Zimbabwe) to mitigate the impact of HIV/AIDS on Zimbabwe’s children by enhancing the sustainability of comprehensive palliative care support services for OVC their caregivers in Mashonaland West Province.

The program being spearheaded by HOSPAZ implementing partners Pamuhacha HIV/AIDS Prevention Project and Tsungirirayi Welfare Organisation targets 62 728 children and their households. Under the HOSPAZ Bantwana OVC program, projects are being implemented in hard to reach and HIV hotspot areas in Mhondoro-Ngezi, Zvimba, Chegutu and Makonde Districts.

The program contributes towards the 90-90-90 cascade of ending the HIV epidemic by 2020 through increased uptake of HIV testing services, sustained antiretroviral therapy case management and viral load suppression. Hence, offering a new lease of life to women like Sarudzai and many others!
*Names have been changed.