South Africa can take the fourth position in the T20 rankings by defeating Pakistan in a three-match series. In this case, Pakistan will move to the fifth position after the defeat. 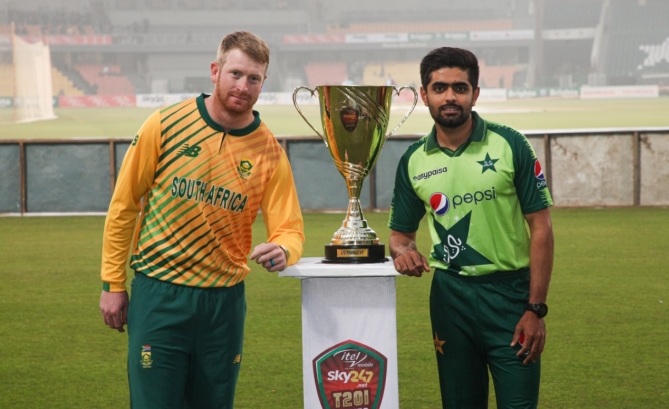 If Pakistan beats South Africa, Pakistan’s ranking will remain at four, but the points will increase. However, after the defeat to Pakistan, the South African team will move to the sixth positionPakistan is presently ranked fourth on the ICC T20I Rankings Table with 259 points, nine points behind India (268), while South Africa are fifth on 252 points. If Pakistan sweeps the series, they will rise to 263 points, five points behind India, while South Africa will join New Zealand on 247 points but will be ranked below New Zealand on sixth points when the points are calculated beyond the decimal point.The two sides will feature in a T20I series on Pakistan soil for the first time. Pakistan’s previous two home T20I series were played in the United Arab Emirates in 2010 and 2013, which were won by South Africa by an identical 2-0 margin.In the six T20I series to date, the only time Pakistan has won a series was in South Africa in March 2013 when they won the Centurion match by 95 runs after the Durban T20I was washed out.The series is part of Pakistan’s preparation for this year’s ICC T20 World Cup 2021. In the lead up to the 16-tournament, Pakistan will feature in, at least, 17 T20Is, including home T20Is against South Africa, New Zealand and England, while their away T20I engagements will be against South Africa, Zimbabwe, England and the West Indies.Team Pakistan:Babar Azam (c), Aamer Yamin, Amad Butt, Asif Ali, Danish Aziz, Faheem Ashraf, Haider Ali, Haris Rauf, Hasan Ali, Hussain Talat, Iftikhar Ahmed, Khushdil Shah, Mohammad Hasnain, Mohammad Nawaz, Mohammad Rizwan, Sarfaraz Ahmed, Shaheen Shah Afridi, Usman Qadir, Zafar Gohar and Zahid Mehmood.Team  South Africa:Heinrich Klaasen (captain) Nandre Burger, Okuhle Cele, Junior Dala, Bjorn Fortuin, Reeza Hendricks, George Linde, Janneman Malan, David Miller, Andile Phehlukwayo, Dwaine Pretorius, Ryan Rickleton, Tabraiz Shamsi, Lutho Sipamla, Jon-Jon Smuts, Pite van Biljon, Glenton Stuurman and Jacques Snyman.—Wasim Qadri, Islamabad based Senior Sports Journalist and Television Show host, can follow on twitter at @jaranwaliya