Pandemonium as ZUPCO arrives in Kadoma

After enduring high bus and taxi fares, residents of Kadoma cheered the arrival of the government owned ZUPCO whose subsidised fare is six times cheaper 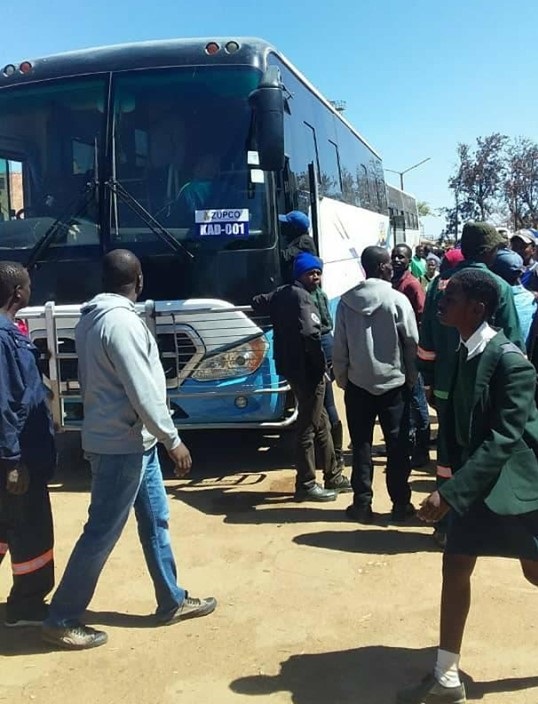 Business came to a brief halt yesterday as flea market and vegetable vendors rushed from their stalls to cheer the arrival of two ZUPCO buses in Kadoma’s central business district.

The first to spot the arrival of the buses was Tembo Chingaona who pointed and whistled. Tembo, who is often attired in the green colours of his favourite soccer team, Caps United, abandoned his vegetable stall to whistle as though Makepekepe had won the Premier League trophy.
“Iro Zupco! Iro Zupco!”

When asked to explain the excitement over the buses, he replied:

“ZUPCO is 50 cents per trip! The minibuses and mshikashika taxis charge $2 for a trip to Rimuka (2km out of town) and $3 to Ngezi. Rio Tinto Mine is $4. I travel to town and back to Rimuka daily, so you can imagine the cost per month”

Asked how the taxi operators would respond to the new competition, the vendors had no remorse.

Proprietors of small passenger vehicles known as Mshikashika favour the Honda Fit and Toyota Vitz models who small size make them maneuverable and economical on fuel. The Mshikashika drivers are notorious for ranking at busy intersections where they block the flow of traffic. Council police who only have one tow truck fail to cope with the sheer number of Mshikashika vehicles.

However, to the west of Kadoma CBD, in Rimuka township, the residents were less impressed.

(We don’t eat ZUPCO buses. The government must bring down the price of basics in supermarkets”. Rimuka, the largest township in Kadoma was the centre of violence during the protests against high costs of living in January. One person was reportedly shot dead by security forces and several others teargassed and beaten.

The Greater Harare Association of Commuter Operators, which sets the trend in bus fares countrywide, states that, in order to break even, the lowest fare should be US$1. But ZUPCO buses are managing Z$0,50 which is the equivalent of US$0,04 (four cents).

Whether ZUPCO’s fares are sustainable, in the long run, remains to be seen.