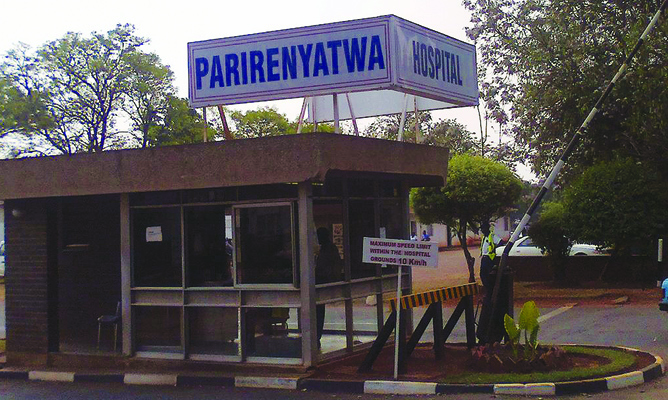 BY VANESSA GONYE/SILAS NKALA
PARIRENYATWA Hospital’s COVID-19 centre has been overwhelmed by the number of confirmed cases since the beginning of last month when the centre started operating, a situation blamed on lack of equipment and the ongoing health workers’ strike.

In a report, the hospital said it had run out of beds to accommodate inpatients.
The hospital is “extremely short-staffed, not possible to achieve the level of monitoring of patients required; number of admissions has been rising substantially, not enough beds,” the report which covers the period from July 1 when the centre started operating to July 24, read.

“Nineteen percent of the admissions were obese, 11% with HIV infection with 59% having one or more chronic comorbidities,” the report said.

Age and comorbidities were cited as strong risk factors for the spike in cases and deaths, while renal failure was another common complication, which led to some of the deaths, the report noted.

The report comes as Bulawayo’s Mpilo Central Hospital acting chief executive Solwayo Ngwenya last week warned of increasing local transmissions and possible deaths if citizens did not change their behaviour.
“The population is not taking the lockdown regulations seriously. So it is a mixture of disobeying of regulations, people mixing around and temperatures being conducive for the virus to breed,” Ngwenya told NewsDay.

“So the virus is going to escalate, it will increase to tens and tens of thousands of infected people, some of them may not be tested because there are shortages of kits worldwide, it’s not possible to test everyone. What I can warn the residents and authorities about is that the virus has taken the route deep into communities, soon there will be a rise in cases of deaths.

“But without drastic measures being taken and the behaviour of people I am seeing here, I can foresee massive deaths in this country.”