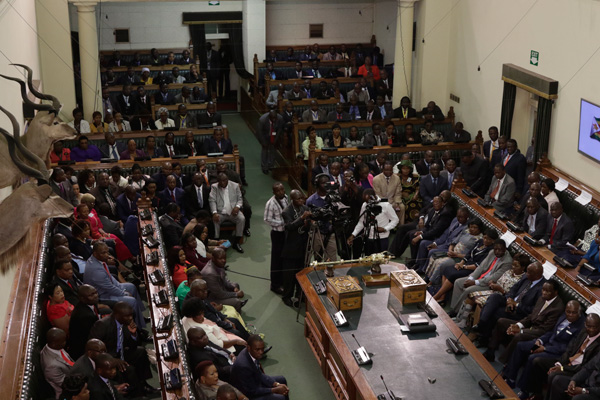 THE National Assembly last week passed the Constitution Amendment No. 1 Bill. This is despite the fact that the amendments had been rejected by Zimbabweans during public hearings on the Bill.

Parliament passed the Constitution Amendment No. 1 Bill. This is despite that the amendments had been rejected during public hearings on the Bill

However, it sailed through Third Reading Stage in Parliament by virtue of section 328 of the constitution which stipulates that a constitutional amendment Bill must be passed by a vote of at least two thirds of MPs in the National Assembly.

Since the National Assembly is made up of 270 MPs, a total of 180 votes were needed to pass the Bill. It then sailed through after getting an affirmative vote of 182 Zanu PF MPs.

The following is what opposition MPs said as they tried to block the Bill from passing through the Third Reading Stage.

When Vice-President Emmerson Mnangagwa entered the National Assembly with all ministers, including some that have been dodging National Assembly question and answer sessions to vote for the Bill, the VP immediately moved that debate on the national budget which was under discussion be adjourned in order to pass the Constitution Amendment Bill. But, his move met serious resistance from opposition MP who felt disrespected. The following are excerpts from the Hansard of what opposition MPs said in resistance to Mnangagwa’s move:

There is debate (on the budget review statement) and that debate, as a point of order, has to be undertaken. We cannot have a situation whereby debate is supposed to be undertaken; then the Honourable Vice-President rises to then seek to quash that debate. That cannot be acceptable. That is terrorism of the highest order and it cannot be allowed.

It is not supposed to be a ping pong with the Vice President. Allow us Honourable Speaker Sir to debate these issues before we even go to what he wants us to do. We will ultimately vote and vote we shall but we cannot be forced or frog marched into voting because they (Executive) want to rush somewhere. They must wait for us as Parliamentarians — [HON. MEMBERS: Hear, hear.] — We cannot and we will not allow that. If they (ministers) have other things to do, let them proceed wherever they want to go Honourable Speaker Sir. We want debate here. We cannot be allowed to be harassed or to be abused by the Executive.

I realise that this House is full this afternoon and we have all government ministers even those that are strange to this House. I think the motive by the VP to adjourn debate on the budget to bring in the Constitution of Zimbabwe Amendment No. 1 Bill is motivated by the fact that we have all ministers here who are busy with other things elsewhere. Mr Speaker, I want to appeal to you that if ministers are not happy to sit and listen to us debating the budget, they are free to leave and go and do those other things and we remain to debate the budget.

We cannot indulge the Executive because we want to vote and we want to please them. We have a very important motion before us. We are debating how money is used in Government and how money should be allocated to ministries. I think that should take precedent over and above everything else. Ministers are free to and to do their business and when they have time to come, they can come and then we do the voting. As of now, we want to continue with the debate of the budget.

What I am submitting Honourable Speaker is that let us allow the secrecy of the vote by MPs– [HON. MEMBERS: Hear, hear.] — So that we have a secret ballot. There are MPs who are intimidated from the other side (Zanu PF). They have been complaining to us Mr Speaker Sir. Voter intimidation cannot be allowed in Parliament. We know that they are being harassed into voting in a particular way. Let us allow the secret ballot and I can assure you that we do not have assisted voters, no secret manipulation. Let us have each and every member voting for themselves, then we will be able to have the vote being done properly.

I hear you Honourable Chamisa, and in your request you referred to the South African Constitutional Court which decided that the final arbiter is the Speaker. So in this case, I say no secret ballot.

In terms of the constitutional provisions the affirmative votes — it does not matter how many votes we have this side — has to be 180 plus. We have to verify first how many people are here because when we counted Mr Speaker; we came up with a figure which is about 173 which is well short of that number. We may have made an error and we need to verify because this is just to fulfil the constitutional position. We have to comply with our Constitution because some people were seated haphazardly and it was not very easy to verify.

Leader of the opposition in the National Assembly Thokozani Khupe

Votes must be verified to the satisfaction of both sides and the only way that we can be satisfied is that two chief whips from MDC count the Zanu PF side and those from Zanu PF count the MDC side together with the Sergeant-at-Arms. We want fairness in this House. If indeed we are not hiding anything, let us do it like that.

The final tally shows us that without the independent MPs, ZANU PF appears to just have been on the threshold. With those distortions and disparities that I mentioned, it is possible that this affirmative vote was not achieved properly and in accordance with the provisions of the Constitution.

Norton MP Temba Mliswa voted with Zanu PF legislators in support of the constitutional amendments to change the manner the Chief Justice, deputy Chief Justice and Judge of the High Court will now be appointed. Mliswa even celebrated the passage of the Bill by doing press-ups in the House, while Zanu PF MPs cheered.