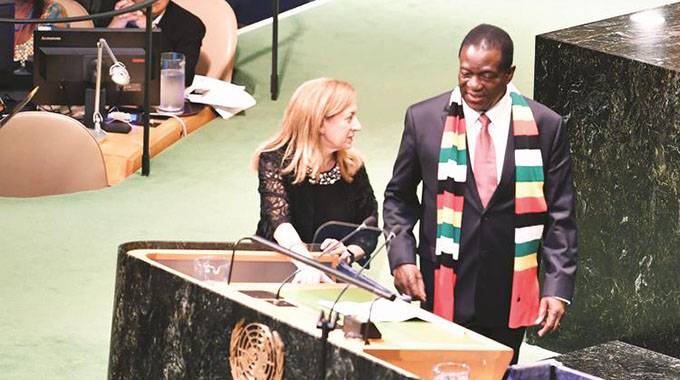 Mabasa Sasa in NEW YORK
President Mnangagwa’s vision of making Zimbabwe an upper middle-income economy by 2030 is on track, if the upward trajectory in per capita income is anything to go by.

On Sunday, the President revealed that per capita income in the country has increased in the eight months since he first assumed office, from $900 to $1 500.

Addressing the Zimbabwean Diaspora in the United States in an interaction with them here on Sunday, the President said the country was moving in the right direction, and enjoined all citizens — at home and abroad — to work together in unity, peace and love to grow the economy and improve livelihoods.

The President is primarily here to attend the 73rd Ordinary Session of the United Nations General Assembly, but has used the opportunity to engage potential investors and financiers who can support his economic turnaround  agenda.

And on Sunday, he broke from the tradition of his predecessor and reserved the entire afternoon to meet Zimbabweans resident in the United States to update them on developments in their country, hear their concerns and respond to them, and to rally them to support the development of their homeland regardless of political affiliations.

The interaction was frank and buoyant, with opposition supporters also being given the floor to air their unflattering views of Zimbabwe’s leader.

President Mnangagwa took it all in his stride, keeping the atmosphere relaxed and taking on criticism head-on while responding with both wit and poise, often drawing applause and laughter from supporters and opponents  alike.

On the issue of the state of the economy, the President said: “At the time this dispensation came into office in November last year, the per-capita income was around $900 that time. But within eight months we have moved to $1 500 per capita and we are saying that our goal is to reach $3 500 per capita by 2030 and by then it means we shall become an upper middle income economy.”

He said economic revival was a process and not an event, and it required concerted efforts from all Zimbabweans, including Diasporans.

“I have no doubt that you have gained a lot of international exposure, acquired a lot of skills that you could not have acquired back home with a collapsing economy,” he said.

On Zimbabwe’s standing in the international community, President Mnangagwa said he was pleased that relations with the West were improving, all this too was painstaking work.

He said the normalisation of relations in no way meant a reversal of the Fast-Track Land Reform Programme, itself the bone of contention between Zimbabwe and – primarily – Britain, the European Union and the US.

President Mnangagwa said land reforms were a closed chapter in as far as international relations were concerned, and that Britain had accepted this and was willing to move forward in unison with Zimbabwe.

“We are where we are as a result of the decision we took on the land reform programme, be clear, I am not regretting that we took back our land, the land reform is irrevocable.

“Fortunately even the British accept now that the issue is dead, we are discussing with mutual respect to move forward.”

President Mnangagwa said he would meet Britain’s Minister of State for Africa Harriett Baldwin during the course of the General Assembly. The President is also scheduled to meet UN Secretary-General Mr António Guterres, and Belgian Prime Minister Charles Michel.