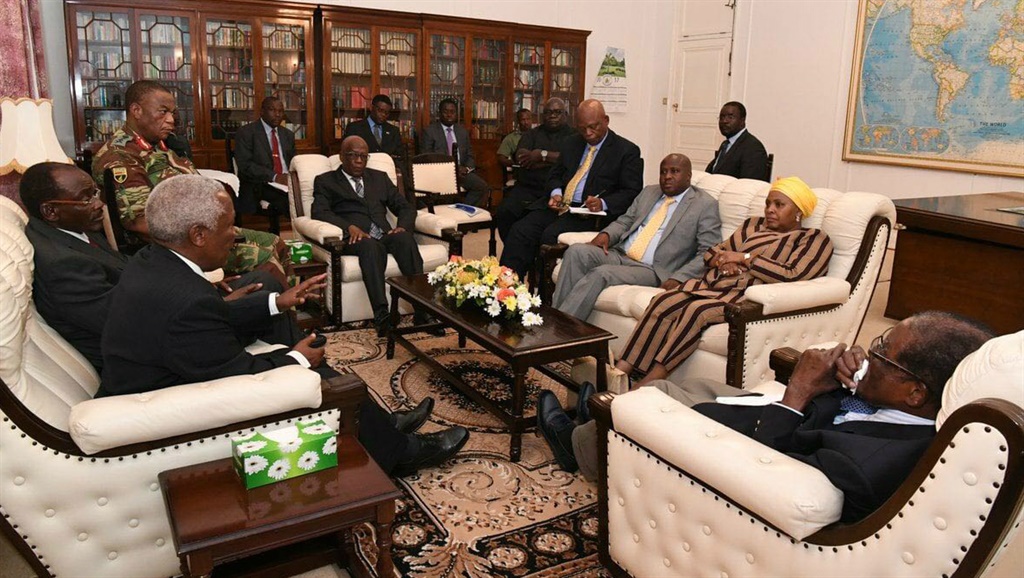 Harare — Zimbabwe President Robert Mugabe was shown meeting on Thursday with the army commander who put him under house arrest, as negotiations with a South African delegation and a Catholic priest at the state house pushed for a resolution to the political turmoil and the likely end to Mugabe’s decades-long rule.

New photos of the meeting on Thursday afternoon has been circulated.

The photos did not show first lady Grace Mugabe, whose rapid political rise had alarmed many in the country who feared she could succeed her husband.

President Robert Mugabe meets with a South African delegation, the army chief and members of the Zimbabwean government. (Supplied)

Seizing on the political limbo to speak out, civil society groups and opposition leaders urged Mugabe to step aside after 37 years in power and for the country to transition into free and fair elections.

Mugabe has been in military custody, reportedly with his wife, since the army stepped in overnight on Tuesday. There was no sign of former Vice President Emmerson Mnangagwa, whose firing last week angered supporters in the military amid concern that Grace Mugabe would take his place at a party meeting next month.

The military remained in the streets of Harare. Southern African regional officials were meeting in neighboring Botswana on the crisis.

A joint statement by more than 100 civil society groups urged the 93-year-old Mugabe, the world’s oldest head of state, to peacefully step aside and asked the military to respect the constitution. A joint statement by churches also appealed for calm.

One analyst said he believed the negotiations “have pretty much reached an end point” to get Mugabe to step aside and that it was a “matter of hours or days.”

Knox Chitiyo, associate fellow with the Africa program at Chatham House, warned that speculation remains high but said the aim was a peaceful, managed transition. He said the military wants a dignified exit for Mugabe, who has ruled since independence from white minority rule in 1980 and remains widely known, even praised, in Africa as a liberation leader.

Chitiyo said he doesn’t know where the ailing Mugabe would go but that the destination is “likely driven by his health.” Mugabe routinely seeks medical treatment in Singapore.

Opposition leaders spoke out but said they had not been contacted as part of the Mugabe negotiations.

Opposition leader Morgan Tsvangirai, who shared power with Mugabe between 2009 and 2013, said Mugabe must resign and said his party would participate in talks on a transitional mechanism if approached.

He pointedly referred to Mugabe as “Mister.”

A vice president who was fired in 2014, Joice Mujuru, called for “free, fair and credible elections” following a transition arrangement that draws from a range of communities.

Zimbabwean Evan Mawarire, the pastor whose #ThisFlag social media campaign last year led to the largest anti-government protests in a decade, asked: “Should we just sit and wait or shall we at least be part of this transition process?”

Across the country, Zimbabweans long frustrated by crackdowns on dissent and a collapsing economy were enjoying freedoms they haven’t had in years. For once, they weren’t contending with bribe-seeking police officers who mounted roadblocks every few kilometres.

Street vendors who endured police raids after Mugabe ordered their removal were working without hassles. Trade unions urged workers to go about their business.

“The situation is quite OK because they are now returning to their jobs,” said one resident, Clinton Mandioper.

Human rights groups urged respect for rights as the drama played out.

Amid questions about the whereabouts of first lady Grace Mugabe, one Namibian newspaper, the New Era, reported that the country’s foreign minister denied she had fled there.

The US Embassy advised citizens in Zimbabwe to “limit unnecessary movements” as political uncertainty continues. The British government also urged its citizens to avoid large gatherings and any demonstrations.