PICS: Mugabe had a ‘hero’s’ birthday party… and Grace doesn’t look that sad 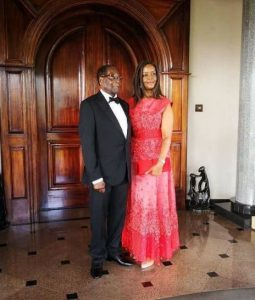 Harare – Hang on, didn’t Zimbabwe’s ex-president Robert Mugabe just tell an Africa Union chief he didn’t feel safe and that his wife Grace was in tears every day?
These pics from Mugabe’s glitzy private 94th birthday party in Harare over the weekend certainly don’t make the former first couple look that unhappy.Taken from Mugabe’s nephew Patrick Zhuwao’s Facebook page, they show Grace Mugabe in a sweeping red evening dress. She and her husband clasp hands in front of an imposing doorway flanked by their three children (including daughter Bona, who’s reportedly just given birth to her second child).

A black-and-gold invitation to the party, posted online by media watchdog @ZimMediaReview shows guests were invited to celebrate “our Hero” (in large print) at a black tie event at Blue Roof. Blue Roof is the Mugabes’ Chinese-style mansion: some Zimbabweans marched to it during November’s military takeover.

While Grace boasts a rather triumphant smile on the birthday pics, Mugabe looks stony-faced. But then he almost always did during his 37-long years in power.

“With a house that looks like a castle. No suffering here,” commented Zimbabwean @tavmanj.

Said @glenmpani: “Mugabe and his wife look safe and sound. These are the pleasures of life after office.”